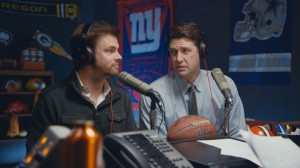 Created and distributed with mobile viewers in mind, the original series rooted at the nexus of sports and comedy will live exclusively on go90, the free mobile-first video platform, with new episodes releasing every Wednesday for the entirety of the seven-episode season. Executive produced by and starring Tommy Dewey (Casual, The Mindy Project) and Tug Coker (The Office, Broadway’sMagic/Bird), Now We’re Talking takes a fresh, comedic approach to Tug and Tommy’s post-football relationship, with the former adversaries now forced to work together to try to find success on a new playing field.

The series is directed by Joe Nussbaum (Awkward) and written by Coker & Dewey, who executive produce along with UNINTERRUPTED CEO Maverick Carter and Jamal Henderson, as well as Jennifer Gore (Too Late with Adam Carolla) and Nikki Kessler (Mind of Mencia).

About go90 go90 is a free, mobile-first, social entertainment platform that makes it easy and fun to discover, enjoy and share great content. Available on iOS and Android, go90 is part of the Verizon Communications family of companies. Built for the next generation, go90 brings together networks, distributors, creators, audiences and brands to deliver great experiences for the next generation. For more check out go90.com.

About UNINTERRUPTED UNINTERRUPTED is a distributed media platform totally dedicated to athletes, fans, and lovers of sport. UNINTERRUPTED is not journalism. Producing a wide range of unique, creative, and captivating content, UNINTERRUPTED empowers athletes to let the world see what they see, develop their most creative ideas, and tell the stories most important to them. As sports media and cultural influence continues to expand, UNINTERRUPTED is committed to the voice of athletes and the audience that wants to go deeper.

About Blue Ribbon Content Formed in 2014, Blue Ribbon Content (BRC) is Warner Bros.’ short-form series production unit, charged with developing and producing live-action series for digital platforms, tapping the creative talent already working at the Studio while also identifying opportunities for collaboration with new writers and producers. In addition to live-action programming, BRC produces animated content and is also experimenting with emerging platforms such as virtual reality. BRC programs include the upcoming UNINTERRUPTED Original Series Now We’re Talking for go90, Justice League: Gods and Monsters Chronicles for Machinima, Vixen and the upcoming Freedom Fighters: The Ray for CW Seed; and the Batman: The Animated Series virtual reality experience with OTOY Inc., among others. For more information, visithttp://www.blueribboncontent.com.