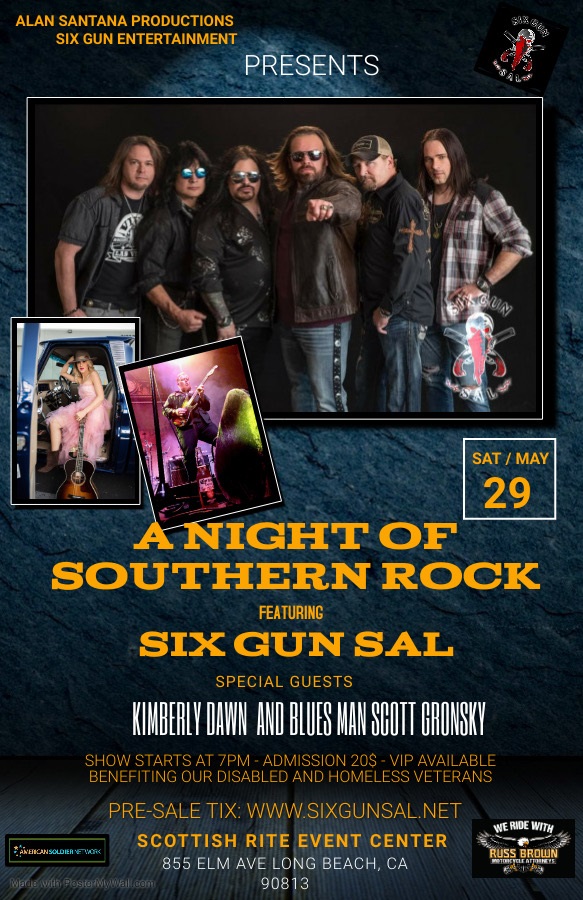 Memorial Day weekend brings Six Gun Entertainment and the Scottish Rite Organization’s first annual Run for the Rite and A Night of Southern Rock on Saturday, May 29. The all-day festival benefits nonprofits that work with homeless and disabled veterans, including the American Soldier Networks, Tickets for Troops, and One World Media.

The day kicks off at one of three Harley-Davidson locations in SoCal (Antelope Valley at 8 a.m. Harbor City at 9 a.m. or Los Angeles at 10 a.m.). From there, bikers head to the Scottish Rite Event Center in Long Beach for food, vendors, beer, live local music, a raffle of a gorgeous Michael Kelly Guitar, and other festivities starting at 11:30 a.m. The event opens with the National Anthem and a Salute to our American Soldiers. The day culminates in A Night of Southern Rock, featuring Six Gun Sal (Southern Rock), country singer Kimberly Dawn, and Scott Gronsky (Soul Bluegrass).

WHO:  A Night of Southern Rock” Festival will be a huge day Festival with a Biker Run “First Annual Run for the Rite”, live local Rock Bands, vendors, and festivities –  An all-day/ night affair.

A portion of the Proceeds from ticket sales will benefit homeless and disabled veterans.  American Soldier Networks, Tickets for Troops, and One World Media. Tickets Available at: Eventbrite rb.gy/9g44vf

All-day festival tickets are available through Eventbrite starting at $20 and include A Night of Southern Rock Concert. A portion of ticket sales benefits disabled and homeless veterans. Tickets for the bike run are available via Eventbrite at $20 for a single rider or $30 for double riders.