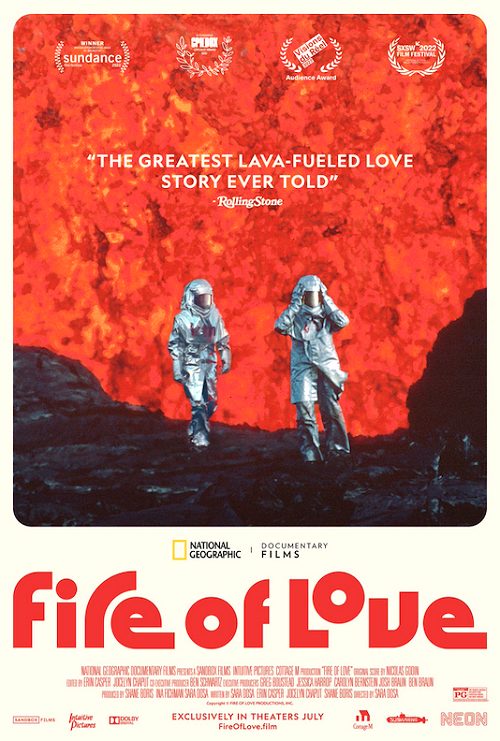 Currently playing at the Laemmle Theatres in Los Angeles is Fire of Love, Sara Dosa’s skillful assemblage of the story of volcanologists Katia and Maurice Krafft as spouses and lifelong collaborators.  Narrated by the soft, lightly cracking voice of Miranda July, Fire of Love consists almost entirely of archival footage shot by the Kraffts.

This is a Herzogian kind of story and the Kraffts were briefly profiled in Herzog’s 2016 documentary Into the Inferno. The Kraffts died together in 1991 while documenting the eruption of Mount Unzen in Japan and the documentary opens with some of their last footage where we see them standing in front of Mount Unzen before the blast like obsessed scientists. Where Herzog’s film has something dispassionate, almost fatalistic in its awe in the face of the volcano’s terrifying power, this film looks for something romantic, celebrating or consecrating the myth of the Kraffts:  They loved each other, they loved volcanoes and it all came together on that terrible day.

Miranda July as the narrator takes us back through the extensively documented lives of the Kraffts, who as a pair might be described as the Jacques Cousteau of volcanology. Publishing books, doing media tours, and establishing their personas as a somewhat quirky husband-wife duo in an esoteric and inherently dangerous field of research, the Kraffts flirted with mainstream fame (at least in France) at the moment that the study of volcanoes took off.

Fire of Love presents their mutual attraction to volcanoes and each other as being formed not only by their shared memories of life in Strasbourg – atop a fault line whose shifting destroyed Basel, Switzerland, in 1356 –but also by the crucible of the Second World War. Strasbourg lies in Alsace, coal-rich territory whose possession was long at the core of the Germany-French tension that exploded into violence over and over again in the 19th and 20th centuries.

Twice in Fire of Love, the unpredictable chaos of volcanic activity is compared to the destruction of war: First we’re shown glimpses of a city in ruins after WWII and, later, a smash cut brings us from the smoke rising from a rumbling volcano to a bomb being dropped over North Vietnam. One of the earliest images of the Kraffts together, it turns out, is from a front-page photo in a 1967 issue of L’Humanité taken during an anti-war protest in Paris. The intersection of and correspondence between geological and geopolitical history pops up again in Maurice’s assertion on French television, included later in the documentary, that he wants to live “a kamikaze existence in the volcanic beauty of things.”

The Kraffts often veer nail-bitingly close to danger in the film footage that Dosa presents to us – shot by Maurice Krafft. At various points, Maurice goes paddle-boating on an acidic lake and professes his dream to go canoeing on a stream of lava. But the couple’s cool attitude toward danger does not reflect their seeming indifference toward death. Early in their early career they focused on the burning-hot but relatively mild “red” volcanoes, their work in the ‘80s proved to be focused on studying “gray” ones – to try to prevent their much more devastating impact on human populations.

After the eruption of Mount Nyiragongo in Zaire in 1977 – which they had visited just four years before during a smaller eruption and miscalculated the power of another explosion and its potential debris – the Kraffts shifted the focus of their study for humanitarian reasons. Though Maurice hated classifications, his two general categories of volcanoes were “red” (nonlethal volcanoes with red lava, which weren’t dangerous to get up close to and, once erupted, provided incredibly rich soil) and “grey” (extremely dangerous volcanoes that flung tremendous amounts of debris and ash across great distances). While it seems hyperbolic to describe the latter category as killer volcanoes, that’s exactly what they are and the Kraffts’ decision to study them exclusively is why they’re not around today.

The sometimes effective, sometimes cringey narration repeatedly returns to the metaphor of a heartbeat and blood, which is perfectly suited to lava and built-up pressure, but fails when it comes to the inexpressible reality of their lethal obsession. “How the earth heart beats, how its blood flows. Now they feel their own human hearts beating and breaking,” July intones after the Colombian government failed to evacuate villages (despite warnings from volcanologists), which resulted in the deaths of approximately 25,000 people. The Kraffts’ sublime passion for science superseded rationality; how could that ever be put into words, especially when the filmmaker is limited to recounting their increasingly perilous actions?

Near the end of the film, after their death in Japan, Dosa uses a clip from a French TV interview with the couple. “Me, Katia, and the volcanoes, it’s a love story,” says Maurice. But that is the whole point of the film. Perhaps Herzog understood something about the Kraffts that this film doesn’t quite get, for all its fascination.

The element of the danger cult, or death cult, in their work, seems similar to that of Timothy Treadwell in Herzog’s film “Grizzly Man,” the amateur grizzly bear enthusiast who hung out with grizzlies in the wild until one killed him.