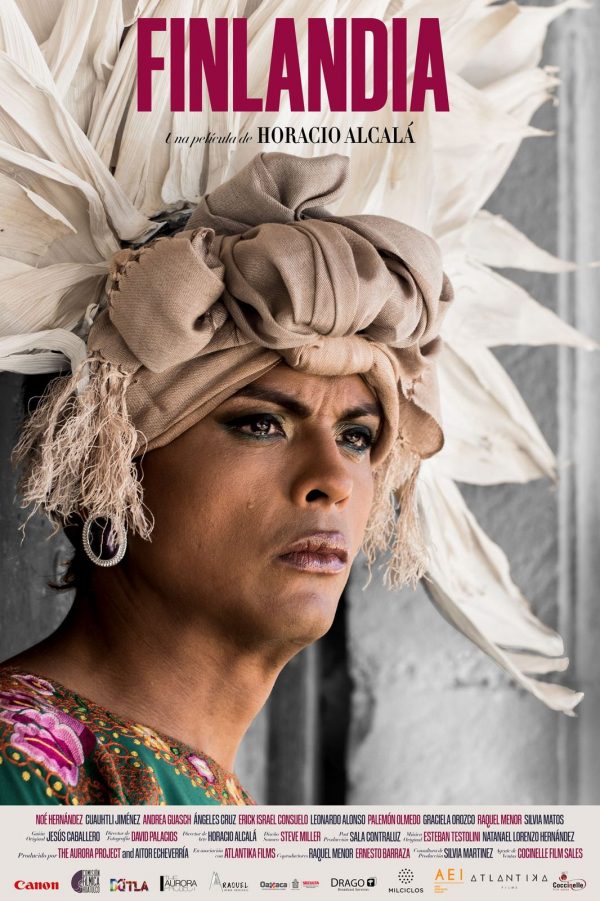 Los Angeles, CA (The Hollywood Times) 4/6/22 – Coming up this weekend of April 8-10 will be the annual Outfest Fusion Film Festival, at various venues around Los Angeles, including the Regal LA LIVE (Theatre 13) in Downtown Los Angeles.  A most intriguing film is Horacio Alcalá’s Finlandia (2021), a Mexican-Spanish co-production about the Muxhe community of Zapotec One people who identify as third-gender. I will screen at the Regal LA LIVE in Theatre 13 on Sunday, April 10, at 3:45 pm. The story begins with Marta (Andrea Guasch), a young Spanish fashion designer, who journeys to Oaxaca, Mexico, in order to copy local clothing traditions and styles and bring them back to Europe. But in the course of her stay in the town of Juchitan de Zaragora, she meets several Muxhe persons and it has an enduring impact on her life and belief system. For tickets to the in-person screening at the Regal LA LIVE, go to : https://www.outfestfusion.com/schedule. Finlandia can also be streamed online from April 13 through April 17.

One might be tempted to view this fictional film as one of magical realism, and certainly there are aspects of that in the story. The film opens with a devastating earthquake that strikes Oaxaca and causes hundreds to fall victims to its effects. As the framing device, I was reminded of a story by Heinrich Kleist – “The Earthquake in Chile” – where a major earthquake has profound effects on the life and psyches of its characters. The drastic physical effects are felt in Mexico. This seismic movement causes an emotional tremor in the lives of people in this Oaxacan town. Their secrets, frustrations, and hidden relationships materialize amongst the debris, screams, and dust. After this earthquake, nothing will be the same for the lives of the people of the town nor for the Muxhes who also live in the town.

In the Zapotec cultures of Oaxaca, a Muxhe is a person assigned male at birth who dresses and behaves as a woman. They are usually referred to as third gender. They do not suffer from gender dysphoria and few desire genital surgery. There is little pressure to “pass” as in Western urban societies. The region of the Isthmus of Tehuantepec has a predominantly Zapotec population. Here the Muxhe face less hostility than homosexual, effeminate males or trans women. One study estimates that 6 percent of males in the Isthmus Zapotec community are Muxhe. Some marry women and have women, while others choose men as sexual or romantic partners. Many Muxhe prefer women’s work such as embroidery or decorating altars, but others do the male work of making jewelry. Muxhe may be vestidas (“dressed,” wearing female clothes) or pintadas (“painted,” wearing male clothes and make-up). These days most of the younger generation of Muxhe are vestidas. Some are presently involved in politics and many hold white-collar jobs.

The movie has some realistic elements that are related to its setting mostly. The decor has not been altered, and the director shot the authentic streets and places of devotion of the Zapotec people. The viewer enters the world of the inhabitants of Juchitan de Zaragora through the food, life, architecture, and social life on the screen. Most of the scenes are shot outside and illuminated by the powerful Mexican sun, which intensifies the incredible landscape and colors of the Muxhes’ traditional clothing. Finlandia gives us an upclose insight into the process of creation and production of their designs, which are mostly made by the Muxhes themselves.

As for the story in Finlandia, the film’s title is a reference to the county of Finland and occasional correspondence that the eldest Muxhe Delirio receives from a man living in Finland who seems to be an admirer. Delirio is a spiritual leader, and mentor for the young Muxhes. She also has a special gift, she has premonitions of death, even of people she doesn’t know. She is not a man or a woman. She is a pioneer that has fought for decades so that people like her could find their place in a patriarchal and sexist society. As the film opens with the earthquake and its aftermath, the first body found in the rubble after the earthquake belongs to Delirio. And it will be her story that is one of three we follow in the course of the film.

At the center of the film is Delirio (played by actor Noé Hernández), who shared his house and dress-making workshop with Amaranta (Cuandtil Jiménez) and other Muxhe. Amaranta still has sex with men and a failing relationship with a married man is part of her personal struggle.  Young Mariano (Érick Israel Consuelo) is attracted to female attire but spends his time at church as an altar server, pushed by his mother Lorenz (Raquel Menor Rodriguez) to become a priest. Mariano gets bullied by other boys quite often and seeks protection from Delirio. Mexican Catholicism figures large in the movie, and this tends to reinforce the relationship between magic and beliefs. The scene of Delirio and Amaranta, dressing the statue of the Virgin Mary, is curiously emblematic of that. Counter-posed to the Baroque beauty of the old Spanish church is the rock cliff (an old quarry) where the Muxhe go to pray to the Earth and seek connection with the forces of nature.

Despite its fictional frame story, Finlandia is a meaningful documentary about Oaxacan culture and the experiences of the Muxhe in that culture. The young Spanish woman who goes to Oaxaca to “copy” the fine clothing designs of the Oaxacan dresses ends up learning that her understanding of life was naïve. It is through her interaction with these Muxhe that she will find herself and what she should value.

The director Horacio Alcalá has mostly worked on documentary films in the past. These include: his Grazing the Sky (2013) – about modern circus performers in Cirque du Soleil, Voix d’Afrique: Contra la Corruption (2014) – about Transparency International’s work in Africa, and My Kingdom Come (2019) – about a famous handicapped Spanish athlete Simón González.