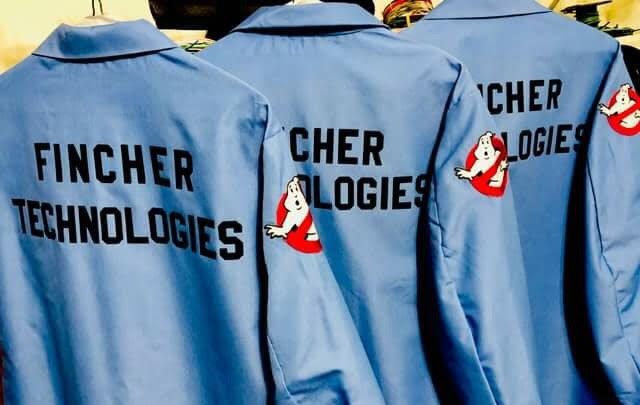 Birmingham, AL (The Hollywood Times) 08/31/2018 – If you were a child of the 80’s, then you distinctly remember either constructing your very own Ghostbusters proton pack out of cardboard and spare vacuum cleaner parts, or owned one from the Real Ghostbusters toy line from Kenner. Some of my best childhood memories involved me and my friends running around the neighborhood and pretending to bust Class Five Full Roaming Vapors, or the nearest cat. After Ghostbusters exploded into theaters in 1984, every kid in town pleaded with their parents to somehow get their hands on a genuine proton pack straight out of the movie.

Thirty some odd years later, that request can now be fulfilled thanks to the masterminds of Fincher Technologies. As a kid, co-owner/builder Charles Fincher was one of the scores of youngsters that developed a love for anything Ghostbusters related. A few years ago, he came to the decision of cosplaying as a Ghostbuster, beginning with a basic flight suit uniform, and evolving into a legit Paranormal Investigator and Eliminator… (in the spiritual sense, of course). After approaching his father, co-owner/builder James Fincher to help replicate a proton pack, James applied his expertise as a retired USAF Aircraft Communications Specialist, and brought to life the very thing that all 80’s kids so desired: a true to form, movie accurate Ghostbusters proton pack replica, or what Dr. Peter Venkman refers to as,”an unlicensed nuclear accelerator.” Forming a stronger bond as father and son through building, they went even further and began building other props, including a replica ghost trap, complete with lights, sounds and a unique addition to achieve a smoking effect, just as the traps from the movie did after a ghost was caught and confined inside. After much trial and error, the suggestion of using the technology in e-cigs was made by Charles’ girlfriend, Cynthia Morris, thereby developing a way to create what they call “vapor on demand,” and giving the trap the effect it needed. The same technology would be used in the proton packs as well.

From there, Fincher Technologies was born. 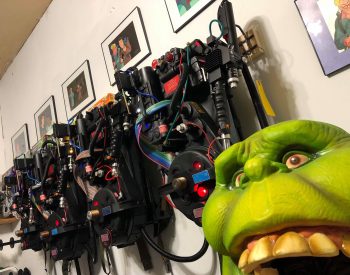 After sharing videos of their work on YouTube and Ghostbusters Fans forums, demand became high from admirers seeking a masterfully built, screen accurate proton pack, so it was decided to produce commission builds for purchase. Several satisfied customers later, Fincher and Son continue tinkering with new ideas and unique ways of sharing their love of Ghostbusters with their customers, offering upgrades and spare parts if needed. Charles says, “Our initial goal was to just make standard movie quality proton packs, but my father and I just kept pushing the envelope and started building more gear as time went by in our little garage. My father loved the challenge, and our bond grew more so than it ever had.”

Recently, Fincher and Son were tapped by famed YouTube stars, Hilli and Hannah Hindi of The Hillywood Show, to provide props for a Ghostbusters themed Supernatural parody that were to be worn by none other than Jared Padalecki and Jensen Ackles (Sam and Dean Winchester) themselves. 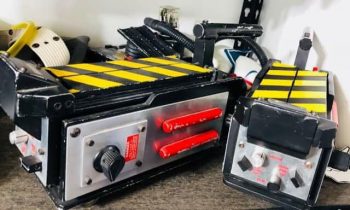 Truly an accomplishment for what began as a simple prop build for cosplay purposes.

According to Charles, “We were so overjoyed seeing Jensen and Jared wearing our gear that we spent so long getting the packs to look as screen accurate as possible. The smiles on their faces the first time they put the packs on made it so worthwhile.”

As Charles and his father prepare for a weekend of wowing the crowds at Dragon Con in Atlanta with the brilliance of their work, his hopes remain high regarding the future of Fincher Technologies. Constantly tweaking and polishing what they presently offer, they also keep a lookout for opportunities to apply their skills toward multiple fandoms, rather than just Ghostbusters. Maybe even a future in prop production for Hollywood films. The sky is definitely the limit for this pair of father and son techies. Charles says, “When it comes to movie props, people only see them as tools that assist the actors. Their intention is to blur the line between fantasy and reality, which can be very influential. We want to help build that bridge as well.” 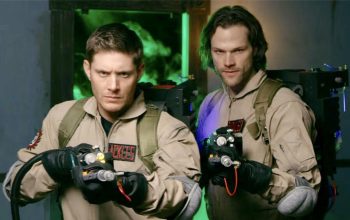 Hollywood, who ya gonna call??

Supernatural Parody by The Hillywood Show: