Los Angeles, California (The Hollywood Times) 3/18/2021 – Louise Brix Andersen is a Danish-born, Barcelona-based writer and director. Her new film, “The Pill” is gaining attention globally. Synopsis: In the near future, the company ALAS provides the public with a controversial product. Alma, a 19-year-old young woman with a seemingly perfect life, has decided to enlist its services after a policy change lowers the minimum age requirement. Belén, an employee of ALAS, is outraged by her company’s new policy and finds herself torn between following her heart and keeping her job. In the reception lobby, Alma is given her room’s keycard, but when she recognizes the number on the key as her date of birth, a seed of doubt is planted. Mounting pressure from the controlling receptionist and a feeling of not being able to turn back now force her to continue to the room where Belén joins her. Upstairs in room 422, right and wrong are suddenly not so clear, and ethics and morality will not help you to make the right choice. Louise is also the co-founder/leader of the group THE LEADING LADIES where she organizes monthly online meetings for the group’s members with such inspiring guests as Starr Parodi President of the Alliance for Women Film Composers and Emmy-nominated film composer Miriam Cutler.

Tell us about how your film, “The Pill” and how it came about?

Last summer when film productions were shut down due to the pandemic, everyone became worried, anxious, and even depressed about the unknown of what the future will hold as far as our personal and professional lives. I had recently joined an international group of film industry people on Facebook when I suddenly came up with an idea. The group’s name is “The Entertainment Industry MASTERMIND GROUP” and was founded by Hollywood film editor and industry mentor, Tina Imahara. She had managed to create a very supportive, motivating, and inspiring atmosphere in the group so I decided to pitch the idea of making a film in remote during the pandemic in collaboration with all the members of the group. The members loved the idea and people from all over the world – Hollywood, Miami, Holland, India, Germany, and Barcelona, just to name a few – got united to bring this production to life. I had already written the script, however, we formed a small writer’s group to see if we could further improve the story and the characters. Only one month later, in August, we started our remote pre-production.

“The Pill” is unique in many ways. Explain.

The production of The Pill is unique because the entire pre-production (including meetings, casting, rehearsals, and preparations) and post-production (including editing, music, and sound), was done almost 100% remotely by individuals who had never met in person. We scheduled meetings through our Facebook group and spent many hours on Zoom calls. The film was eventually shot in Barcelona, Spain with the talented actresses Sanna Toivanen and Miriam Marcet Farreny who are based in Barcelona, and actress Tina Jawidan who flew in from Holland.

Another interesting thing about our team is that it consisted of people with all levels of experience. We included anyone from the Mastermind Group who wanted to participate. People were given tasks and responsibilities according to their level of experience. That means some people would be shadowing or assisting while others would lead and have full responsibility. Through Tina Imahara, the Executive Producer of the film, we had access to very experienced Hollywood mentors who would consult and assist us along the way. We also did a somewhat unusual fundraising campaign. Instead of doing your typical crowdfunding campaign on a platform like Kickstarter or Indiegogo, we did our entire campaign through our website and our Facebook community. If you are interested in seeing what perks we have been offering, you can visit our website: www.thepillthefilm.com.

Take us through the film. What happens when you are challenged on moral codes?

I wrote this script after seeing a headline in a digital magazine that got me thinking. I am very drawn to complex themes, human behavior, and taboos in general. I like challenging myself and the audience on our point of view, prejudice, and feelings. The best compliment I can get on my films is when people tell me it got them THINKING. Sometimes we are stuck in codes and narratives that we have been told by society, parents, or even by ourselves, and I believe it’s good to challenge yourself on those narratives once in a while. It’s good to remind ourselves that there can be different perspectives, and something that feels right to us can feel very wrong to others.

This film is about mental health, and I chose not to explain to the audience everything because I wanted them to make up their own mind about certain things and aspects of the story.

What surprised you the most while filming?

It was surprising to me how well people received my idea of making this film remotely and in collaboration with people who had never actually met each other before. The trust in me and in the project just continued throughout the whole production, and I think that was really the key to success. We all trusted in each other and believed that we could do this. Obviously, this took a lot of hard work. When you work with people from all over the world, you have to be ready to do Zoom calls at times of the day/night due to time zone differences.

Rehearsals with the actresses via Zoom meetings went surprisingly well. It was a little strange in the beginning, and I know they had to get used to the format, but eventually, they found a way to use it to their advantage. It also gave the actresses more flexibility. We could meet almost at any time we wanted. I was also positively surprised to see how much support and interest we got from other filmmakers and people working in the industry. They were curious to see how we were making this film. They felt inspired and motivated by our project, and many of them supported us in our fundraising campaign.

How is “The Pill” keeping dreams alive?

I think The Pill is such a great example of what we are capable of doing when we are pushed to the limit. We saw how productions were shut down, and many people lost their jobs. It seemed impossible to do anything, but this is actually what pushed me to think out of the box and find a way to use the pandemic to my advantage. Due to confinement I, all of the sudden, had more time which I invested in online networking. This is ultimately what brought me to discover the Mastermind Group and begin to form really close relationships with people from around the world. Like all productions, we had several bumps on the road, but because we all trusted the project, and were determined on getting this film done, we managed to power through it all.

What did you learn through the creative process of this film and about collaboration?

This film proved to me that we are not limited to work and collaborate only within the area where we live. It might seem obvious, but seeing how much of a production can be made remotely, basically opens the doors to the entire world. There is so much talent out there, and just because they are based in a different city or even country, doesn’t mean you cannot work with them – even on a short film with a limited budget.

What I learned through the production of The Pill is that because you work with people of different cultures, languages, times zones, etc. you will face some challenges that you otherwise won’t have in production, but really it’s all about having clear communication and setting up expectations right from the start. I also learned that even if you work on a production with a limited budget, you can and SHOULD demand that people do their absolute best. Otherwise, why are you even doing it, to begin with? All the hard work, the many hours, the passion and the dedication put into this film by everyone in the team are the reasons why we now feel proud and satisfied with the result. 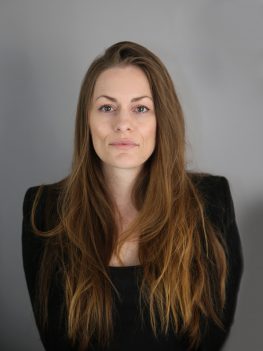 You are the co-founder/leader of the group THE LEADING LADIES. What can we expect in 2021?

I mentioned that our film The Pill is made through a Facebook group called “The Entertainment Industry Mastermind GROUP”. This is a paid group with a monthly fee and includes a variety of online gatherings, networking, training, individual mentoring, collaborations, etc. The group was initiated by another Facebook group called “The Entertainment Industry Collaborators” which is a free group, founded and managed by Tina Imahara, offering networking opportunities, support, and collaboration.

Together with one of the Producers of The Pill, Elaine Roberts, we started a series of meetings for the female members of “The Entertainment Industry Collaborators” as a way of giving extra support to the women. Our intention is to create a safe space for debate, help, support, and inspiration. This is why we host these monthly meetings where we invite special guests to join us on a Zoom call together with the female members of the group. We have had such inspiring guests as Starr Parodi, President of the Alliance for Women Film Composers, Emmy-nominated film composer Miriam Cutler, and award-winning director/producer/journalist Chelo Alvarez-Stehle who has worked close to two decades exposing stories of sexual exploitation and trafficking. Anyone can join “The Entertainment Industry Collaborators” on Facebook, and all women are welcome to participate in our Leading Ladies meetings which are always held the first Thursday of the month at 9 AM PT. We have a long list of really interesting and inspiring guests lined up for 2021.

On www.linktr.ee/louisebrixa you can find all my social media, personal website and the website for The Pill. You will also find some Behind The Scenes videos (we will release the third and last video next week) from The Pill where you can see more about how this project was put together.