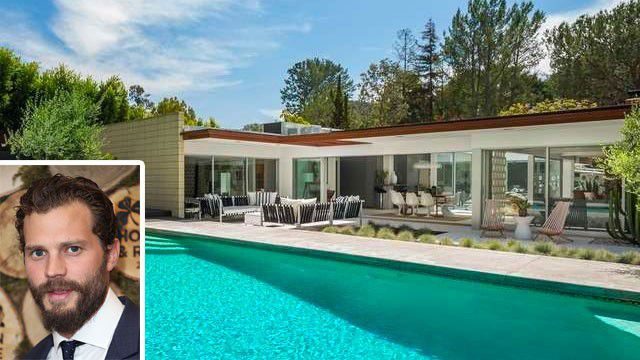 Irish actor Jamie Dornan, best known for his lead role in the movie ‘Fifty Shades of Grey,’ has placed his classic California mid-century modern on the market for $3.195 million.

Nestled in the Hollywood Hills among large shade trees at the end of Nichols Canyon Road, the 2,510-square-foot, four-bedroom, four-bath, mid-century home was built in 1959 but underwent an extensive update prior to Dornan’s purchase. Capitalizing on the pleasant year-round climate, the center of the home has a large center atrium flooding the interior rooms with sunlight and the sound of trickling water wafting from a small waterfall and Zen-like water pond with large stepping stones. A peaceful retreat, yet large and dramatic for entertaining, it also opens to an outdoor terrace and deck with grass area, swimming pool, spa and firepit that is enclosed for privacy by a wall and towering foliage. Rooms are large with ceiling-to-floor glass walls opening either to the atrium or outdoor entertainment area. There is a double-sided fireplace between the living room and dining room and one kitchen wall is against the glass wall of the atrium making it feel as though one is cooking outside. The master suite has a walk-through closet and opens to the pool terrace.

Labeled “The Golden Torso” by ‘The New York Times,’ Dornan became a well known male model appearing in campaigns for Abercrombie & Fitch, Hugo Boss, Armani and Calvin Klein, quickly parlaying his runway skills into television commercials. It wasn’t until his part as Christian Grey in the ‘Fifty Shades of Grey’ trilogy, that his box office popularity soared off the charts. The listing agent for Dornan’s home is Jeff Kohl of The Agency, Beverly Hills, California.

Before Netflix, Amazon Prime and Hulu, Blockbuster Video was the go-to place to stock up on a weekend’s supply of movie entertainment. The size of the chain gave Blockbuster the financial ability and heft to offer new releases and variety with which the original mom & pop video-rental shops could not compete. The brainchild of entrepreneur H. Wayne Huizenga, Blockbuster cornered the video rental market. One of the fruits Huizenga’s success, who died in March, was his opulent Florida-style mansion called Tarpon Point on its own peninsula jutting out into the New River in Fort Lauderdale which he purchased in 2005. Now for sale at $26.95 million, Huizenga’s home has become a landmark to Fort Lauderdale’s prolific boating community and tour boats.

Sited on over an acre at the tip of a point less than a mile to Atlantic Ocean beaches and Fort Lauderdale’s luxury condos, the grounds are surrounded on three sides by 600 feet of waterfront, which is perfect not only for tying up one’s mega yacht but for watching the boat traffic, waterfowl, manatees and tarpons. With an overall 21,057 square feet of living space, the home has 10 bedrooms, 18 baths and is thoughtfully divided into three living zones for optimum comfort for family and guests alike. A structure of massive size, the central portion is designed to entertain groups of any size without disturbing others in the family wing or guest wing. The family wing includes offices, bedrooms, private kitchen and family room. The guest wing also includes the staff quarters. Spectacular river and terrace-pool views are enjoyed throughout the house. On the cutting edge of technology, there is an electronic locking system, state-of-the-art security system for doors, hurricane protected windows, emergency generators, elevator and dock facilities.

H. Wayne Huizenga had the rare status of being the only entrepreneur to launch three Fortune 500 companies: Waste Management, Blockbuster and AutoNation. He was also owner or part owner of the Florida Marlins, Florida Panthers and the Miami Dolphins. The home’s listing agent is Kelly Drum of Drum Realty in Fort Lauderdale.