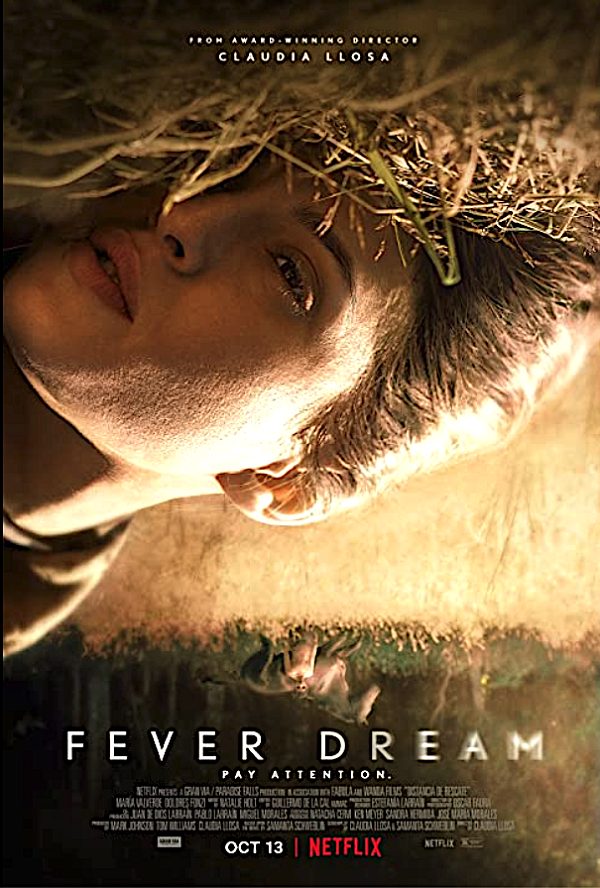 A new film on the scene in Los Angeles and soon to air on Netflix as of October 13 is Claudia Llosa’s Fever Dream (Peru, 2021). I think I prefer a direct translation of its Spanish title Distancia de rescate (“The Rescue Distance”), which refers to the protagonist’s constant mental calculations as to how long it would take to reach her daughter in an emergency. Fever Dream is a psychological thriller in which two mothers fear their children’s souls have gone adrift. The film’s narrative unfolds less as fever dream than waking nightmare, though its hazy, sunstruck styling lends it a certain somnambulant quality. This haunting story of broken souls, toxins, looming environmental and spiritual catastrophes, and the ties that bind a parent to a child is based on a source novel Distancia de rescate by Argentine writer Samanta Schweblin, who co-adapted the novel with Claudia Llosa. I do recommend the novel which is only one example of Schweblin’s fine writing – which includes three collections of short stories, the brilliant Mouthful of Birds (Pájaros en la boca) and Seven Empty Houses (Siete caca vacías). 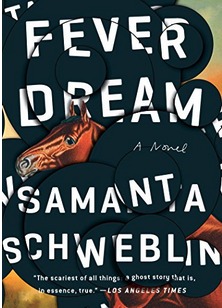 I have followed the film-making career of Claudia Llosa for some time, beginning with her debut film Madeinusa (2006) and her Oscar-nominated La Teta asustada (The Milk of Sorrow, 2009).  Though it could stand to be more searching as a character study, and more suspenseful as a thriller, Llosa’s Fever Dream may well represent more of a commercial breakthrough with general audience appeal beyond art houses. In a discussion with the filmmaker, Claudia Llosa related her purpose in making the film: “I wanted to make it rooted in Argentina, but also respect this feeling that this could be anywhere in the world. It’s like, this horror of the daily life, of the things that we need every day and the fear of motherhood that is always so present. I was portraying the complexity of the feminine world and also motherhood, the difficult balance between giving freedom to your child in order for him to become an individual and at the same time, the need to protect them.”

An ominous opening sequence threatens a full-on horror film, beginning with extreme close-ups of human body parts and undulating slugs. A woman is dragged by unseen forces across a damp, dark forest floor as a young boy’s disembodied voice counsels her to stay awake: “What you see, we all see.” It’ll take us some time to figure out how this discombobulating framing figures into proceedings as we cut to real-world daylight – as the same woman, Amanda (Spanish star Maria Valverde), arrives at an idyllic rural cottage for an extended getaway, her young daughter Nina (Guillermina Sorribes) in tow. Soon after, their friendly, vibrant neighbor Carola (Dolores Fonzi) arrives bearing pails of drinking water, with a warning not to trust what comes out of the tap: unsurprising on a farmstead, perhaps, though the first hint that there’s something unsound about the area.

The two women hit it off, though the film has barely established their friendship when the timeline splinters into Carola’s past, when she lived in the house Amanda is now occupying. Back then, she and her husband, Omar (Germán Palacios), planned to breed show horses, before a stallion’s mysterious death plunged them into debt. Meanwhile, in a seemingly related twist of fate, their young son, David (Marcelo Michinaux), fell suddenly and drastically ill, upon which a local faith healer (Cristina Banegas) advised a “spiritual migration,” transferring the diseased portion of his spirit into another body.

David survived, though according to Carola, the surly, near-feral preteen (Emilio Vodanovich) he has grown into is not her son. Amanda hears her story with appropriate skepticism, though it’s not long before she’s persuaded that something is eerily amiss with the boy, and fears that a part of sweet, loving Nina’s spirit may go missing too. Yet just as you think Fever Dream might be settling into an effectively disturbing study of parental neglect by delusion, Llosa reveals that there is really something, quite literally, in the water. Are the toxins sprayed onto the crops, and carried by worms and insects, not just unnatural but unearthly too?

In a discussion with the director Claudia Llosa, she explains that she approached producer Mark Johnson (Rain Man, Breaking Bad), who had been in touch with her since her uncle, director Luis Llosa (Anaconda), introduced them around the time of Milk of Sorrows. Johnson optioned Distancia de Rescate for her, and she and Schweblin wrote the script. And when Netflix movie chief Scott Stuber asked Johnson, long a powerful influence with the Academy’s International Feature committee, if he could recommend some foreign-language directors, Johnson brought in Llosa and set the project up as a Netflix Original South American Spanish-language production. “There’s such a huge number of countries where Spanish is spoken,” said Johnson, who also reached out to Chilean producers Pablo and Juan Larrain’s Fabula Productions.

In the end, the Peruvian director filmed the movie with a largely female Chilean crew in Chile with mostly Argentine actors. We follow a story within a story as a wealthy vacationing woman Amanda (María Valverde) expires in a hospital bed as she is questioned by a local boy David (Emilio Vodanovich). What the hell is going on? We find out in fragments as the haunting story gradually unfolds: mysterious, elusive, dangerous, and unsettling. “I needed to create that movement,” explained director Claudia Llosa. “This river was an umbilical cord that travels through the film.

Fracturing the journey is so appealing and creates urgency and great confusion and creates this reality at the same time that is threatening. And works like a clock that is ticking, ticking, ticking.” Using voiceover and a rushing river as through-lines, Llosa creates a propulsive, relatable tale of rich visitors and poor locals, protective parents and neglected children, and the sense that at any moment, something can go terribly wrong.