Tampa, Florida (June 8, 2021) –– Disco Donnie Presents (DDP) is the first promoter to lead live entertainment into the post-pandemic era with not one, but two, large-scale music festivals welcoming almost 124,000 happy people and creating thousands of jobs for long out-of-work live entertainment professionals. Through a combination of innovative COVID protocols inspired by professional sports leagues, vaccine uptake and collaboration with local authorities in the first states to welcome mass gatherings, DDP created safe environments that welcomed 60,000 people over two days to Ubbi Dubbi in Ennis, TX on April 24 and 25 and 64,000 to Sunset Music Festival in Tampa, Florida on May 29 and 30. Independent post-Ubbi Dubbi research by JobSiteCare revealed a lower positivity rate from fans who attended than the general population.

With no other festivals to use as guidance, DDP developed novel COVID-19 protocols for each festival including COVID-sniffing dogs, COVID-specific communications, on-site testing, an event specific smartphone health screening mobile applications and collaborations with local authorities. Doing things first is familiar territory for DDP, Disco Donnie himself is one of the few promoters still in business who risked it all in the early days of illegal warehouse parties and the only one to stand up for promoters and venue owner’s constitutional rights to free speech and due process when the government had used the “crack house” law to try to prosecute organizers of raves. Alongside the American Civil Liberties Union, he fought against federal encroachment on civil liberties on constitutional grounds and they won against claims under the Reducing Americans Vulnerability to Ecstasy Act. Once again, Donnie recognized that someone had to take the risk and be the first to produce music festivals on the back end of COVID; it helped that his company has been the leading electronic music promoter in Florida and Texas for many years.

Advertisement
“I’ll always remember the joy fans expressed at the first two festivals after COVID.” Disco Donnie Presents is thankful for everyone who attended, and for all of their staff, artists and industry who committed to going back to work. The mental health benefits of festivals were sorely needed — and when COVID risks started falling, we moved forward. I’ve always enjoyed making people happy (especially paired with really loud dance music) and returning to creating those feelings was indescribable”, says founder James “Disco” Donnie Estopinal.
Following Governor Gregg Abbott’s March 2, 2021 order opening Texas 100% and lifting the mask mandate, and after three COVID-driven date changes, DPP delivered the second edition of camping festival Ubbi Dubbi at Texas Motorplex on April 24 and 25. Not only did Ubbi Dubbi welcome 60,000 people from 50 states (11,643 from out of state) and 6 countries, the festival also created 1,060 jobs directly and DDP donated $45,000 to local charities (Ennis Cares, North Texas Food Bank, Central Texas Food Bank and Houston Food Bank). DDP’s festival total economic impact on the Dallas Ft. Worth area reached $32,000,000. On the COVID front, COVID-sniffing dogs generated a handful of alerts at Ubbi Dubbi and 47 COVID tests were administered with no positive cases.
“Backbone International supplied Ubbi Dubbi Music Festival with its COVID-19 Compliance Officer. The partnership was successful and helped operationalize the festival’s health & safety plan. The plan was well executed, good for the community, great for fans and helped welcome over 60,000 attendees to Ennis Texas safely”. –Jeff King GM Backbone. On a cultural level, Ubbi Dubbi welcomed 53 international artists and 20 local DJs back for their first post-COVID festival performances.
At the end of the festival, for the first time ever, Donnie himself stepped on to the main stage and delivered an emotionally charged speech to the crowd, celebrating the moment and reminding everyone that they were at the first post-COVID festival and it would be a memory to share with their grandchildren.
Less than 30 days later in Florida, DDP and John Santoro co-produced (originally scheduled for July 2020) 12th edition of Sunset Music Festival at Raymond James Stadium in Tampa, FL–the second post-COVID large-scale music festival. Similar to Texas, Florida’s aggressive re-opening plan gave DDP freedom to operate. With even more vaccination shots in arms and an event-friendly climate, DDP’s festival felt like a pre-COVID show. In another first, DDP partnered with FEMA to provide COVID vaccinations at Sunset Music Festival. Overall, 64,000 people attended the two-day event from all 50 states (12,666 from out of state) and 15 countries. The festival also created 1000+ jobs. On a cultural level, the festival welcomed 60 international artists and dozens of local electronic music artists back for festival performances, many of them playing for the first time. Economic impact analysis and post-event attendee COVID research will be released at a later date.
Electronic music’s growth continues across the United States and fans are enjoying travel to new destinations. DDP’s first two post-COVID festivals set attendance records–attendance for each festival grew thirty percent (30%) over prior attendance. 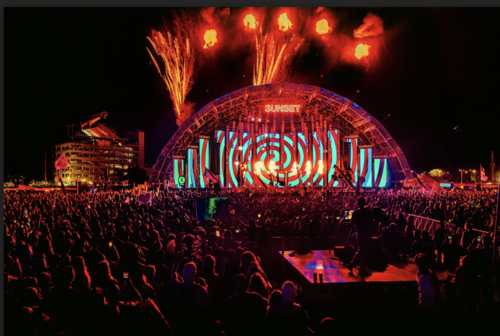 ABOUT DISCO DONNIE PRESENTS:
Disco Donnie Presents (DDP) is an award-winning and recognized leader in electronic dance music event production, founded by veteran promoter James “Disco” Donnie Estopinal. Since the company’s inception in 1994, DDP has sold over 16 million tickets producing over 16,000 live events, arena shows, and outdoor festivals in over 100 markets around the world including the U.S., Mexico, Canada, and Panama. Annually, DDP is responsible for organizing and promoting nearly 1,000 club events across the U.S. ranging from Portland, Columbus, Houston, Tampa, New Orleans, Dallas, and St. Louis to name only a few. He is also known for producing major festivals such as The Day After, Ultimate Music Experience, Sun City Music Festival, and most recently Ubbi Dubbi, Sunset Music Festival, Ember Shores, and Freaky Deaky.
Founder and CEO, James “Disco Donnie” Estopinal, Jr. is considered one of the godfathers of U.S. electronic dance music, evolving over the past 27 years to become one of the top dance music promoters globally. From his early days in the 1990s New Orleans dance scene, Disco Donnie coupled eccentricity with ingenuity to create elaborately themed parties that charmed patrons, garnered an international following, and unwittingly became a catalyst for a national debate over the First Amendment right to expression.
In 1999, Donnie first partnered with Pasquale Rotella, CEO of Insomniac Events, and worked together on EDC Los Angeles, Nocturnal Wonderland Los Angeles, and Beyond Wonderland Los Angeles. In 2008, the duo merged officially, setting their sights on strategically developing the Insomniac brand throughout the world and making Insomniac a household name. Working together, the pair ushered in events such as EDC Orlando, EDC Dallas, EDC Puerto Rico, EDC New York; Beyond Wonderland Seattle; Nocturnal Wonderland Austin, and co-founded Electric Forest. The partnership also produced hundreds of club shows annually in markets across the U.S.
In 2012, DDP shifted its focus to the genesis and development of SFX Entertainment, as the first company to sign with founder Robert F. X. Sillerman; a media entrepreneur with a vision to invest nearly a billion dollars in electronic dance music to bring the world’s leading promoters under one roof.
Disco became a part of LiveStyle in 2017, which housed a worldwide portfolio of top-tier event companies including, Disco Donnie Presents, React Presents, Life In Color, Made Events, ID&T, Tomorrowland, Sensation, TomorrowWorld, Beatport.com, Electric Zoo, Awakenings, Q-Dance, and more.
After shelving the Something Wicked and Something Wonderful brands, Donnie partnered with a sister company in 2018 to bring Chicago’s Freaky Deaky to Houston, Texas, selling 50,000 tickets in its first year. In 2019, DDP announced Freaky Deaky Texas and Ubbi Dubbi, both wholly owned by Disco Donnie Presents. Ubbi Dubbi is Disco Donnie’s newest festival brand which takes us into a world curated by two whimsical imaginary characters known as Ubbi and Dubbi. The new brand took the EDM world by storm, gathering 45,000 attendees in its inaugural year.
In 2020, James “Disco Donnie” Estopinal announced he re-acquired sole ownership of Disco Donnie Presents (DDP), the namesake company he founded 26 years ago. This historic acquisition concludes an epic eight-year journey through being the first company acquired by SFX, surviving SFX’s subsequent bankruptcy, becoming a part of LiveStyle, and finally buying his company back and delivering fan refunds in the face of COVID-19 festival cancellations. Dedicated to continuing to serve the EDM community, DDP created No Parking On The Dance Floor, a new brand that brought 25+ drive-in shows to fans across the U.S. through April 2021.
In 2021, Disco Donnie Presents was finally able to move forward with club shows and festivals once again. In the first week of April 2021, he launched Ember Shores in partnership with Illenium. This announcement marked the company’s first all-inclusive destination music festival, set for December 2021 in Cancun. Ubbi Dubbi returned in April 2021 as the first festival back in the US with 60,000 tickets sold and the company’s first festival camping experience. With the company back in Donnie’s control and the events world returning to its former glory, DDP plans on rapid expansion of new festival brands and show concepts in 2021 and beyond.
Follow Disco Donnie Presents:
Website | Facebook | Twitter | Instagram