Los Angeles, Calif., [April 2021] – Artistic & Festival Director, Aristotle Katopodis announces the 15th Annual Los Angeles Greek Film Festival (LAGFF) will be held on May 10-30, 2021. The LAGFF virtual edition will offer New Greek Cinema with curated features, shorts, documentaries and animation on a secure platform accompanied by a host of webinars, live and pre-recorded Q & As. (Due to the COVID-19 pandemic, LAGFF will run on-line and on-demand only).

The virtual component allows this year’s Festival to reach a global audience. “In the middle of the pandemic there is bad news and silver linings. In Los Angeles, Arclight Theaters and Pacific Theaters have announced never returning to film distribution, which has a major impact on the future of theatrical releases and an emotional impact on all of us who have spent many hours in these amazing theaters,” explains Katopodis.  “At the same time, the news from Greece is that there is an explosion of new production, underway or just beginning, and overwhelming – in a good way – for Greek film crews and professionals. It seems that the enhanced incentives of the Greek Government (EKOME) are finally hitting on all cylinders.”

With over 50 features, shorts, docs and animated films, LAGFF 2021 is the largest and most comprehensive on-line Greek Film Festival outside of Greece. And, many films are making their North American, U.S. and West Coast premieres.  LAGFF showcases new films from Greece and Cyprus, and includes works by international filmmakers of Greek descent. The Festival promotes Greek cinema, cultural exchange and helps to bridge the gap between filmmakers and Hollywood.

There are three major levers that make LAGFF successful.

Industry, Industry, Industry: Relentless focus on the filmmaking industry, both in Greece and of course in Los Angeles. Strong relationships with agencies, studios, industry executives, production houses in Greece and an Advisory Board of over 20 executives from the entertainment industry, make the difference. A large number of the people that bring you LAGFF are filmmakers and recent graduates of local universities.

Filmmakers, Films, Did we mention Filmmakers: LAGFF has always paid attention to the filmmakers, showcasing their work and making every effort to expose them to the best that LA has to offer. We hope that LAGFF is viewed as “the filmmakers” film festival. Our unique International Project Discovery Forum (IPDF) brings Works-In-Progress and is a Live Lab for promising films and filmmakers. We have had tremendous success with major festival wins coming out of this special effort. In the past 14 years over 500 filmmakers have graced us with their presence at the iconic Egyptian Theater on Hollywood Blvd, the Writers Guild of America in Beverly Hills, and the Academy Motion Picture Arts and Sciences’ Linwood Dunn Theater in Hollywood where LAGFF screenings have taken place. LAGFF has hosted over 30,000 film-loving guests, celebrating over 520 screened Greek films in Los Angeles.

Education, Education, Education: With the top six film schools in the U.S. located in Los Angeles, LAGFF is investing, leveraging and counting on the integration of education and film. Strong and developing relationships between UCLA, LMU, USC, CalArts, AFI and LAGFF help to guarantee the continuous engagement of young filmmakers and the festival. A similar effort is underway with Greek educational institutions.

Our Congratulations to Greek Oscar Nominations and Good luck on Sunday, April 25. 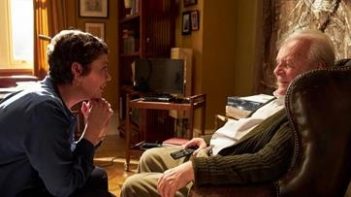 Yorgos Lamprinos edited the masterpiece THE FATHER, a new film starring Anthony Hopkins and Olivia Coleman, and is nominated for an Oscar. The film is an interior portrait of a man who suffers from deterioration of his cognitive abilities. Lamprinos’ editing creates a world ruled by a wholly other sense of time and space while plunging into the mind of the protagonist (Hopkins). He is also known for editing XENIA and OBSCURO BARROCO, both of which have screened at LAGFF. 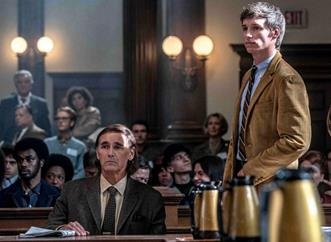 LAGFF wishes to express gratitude to Secretary General for Public Diplomacy and Greeks Abroad, Prof. John Chrysoulakis for his continued effort to unite the Hellenes abroad and support all efforts for culture, the arts, and issues that Hellenes face away from the homeland, under the auspices of the Ministry of Foreign Affairs.

LAGFF expresses gratitude to Honorable Evgenia Beniatoglou, Consul General of Greece in Los Angeles, for her ardent support and promotion of Hellenism.

LAGFF is grateful to Honorable Andreas Kyprianides, Consul General of Cyprus, for his continued support and tireless efforts to promote Hellenic and Cypriot issues and interests in Los Angeles.

Special thanks go to European Languages & Movies in America (ELMA), an organization dedicated to the promotion of European Cinema in America.

ABOUT:  LAGFF is a 501 © (3) non-profit organization and open to all filmgoers and patrons of the arts.  More info at www.lagff.org 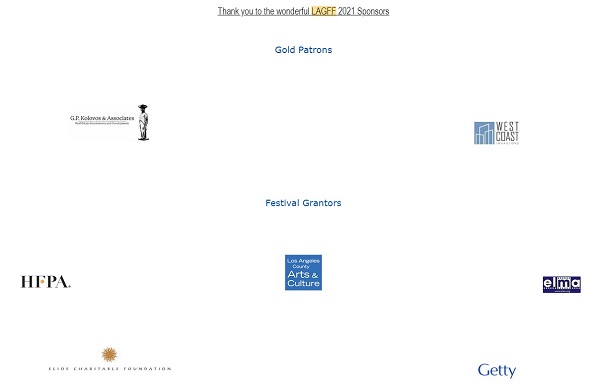