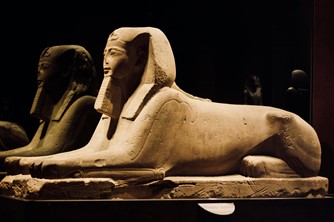 New York City, NY (The Hollywood Times) 2/21/2022- When I squeeze into a crowded Starbucks on dreary New York City days, I sometimes feel a great satisfaction from giving the barista a dramatic name to coincide with my order.  I stand off in the corner, waiting to hear the barista announce to the room, “Cleopatra.”  I then march triumphantly to my double espresso feeling that this declaration is validating my own secret desire to be the goddess and queen of a mystical land.  The cashier has raised an eyebrow or two, but what does that matter?  I have a destiny to fulfill.

Amrita Sen seems to agree with the attitude, as she debuts her latest silk scarves featuring historical women of power.  When I saw her depiction of Cleopatra hand painted in gold and luxuriously ornamented with cats and pyramids, I knew at once that this was a scarf for me.

My closet may be billowing out at this moment with French silk lace, Hermes, and Fleur du Mal, but silk is a luxury that I often justify when it’s done right.  There’s something empowering to me about owning things that I want rather than need.  I’ve always thought that wanting was a power of its own.  And to couple that power with refinement instills in me a sense of pride.

So it’s a great place for designer Amrita Sen to start, especially considering that this March 8 marks another International Women’s Day.  With a process that took ten years, the designs are both mixed media and hand painted in various colors.  Her subject matter includes Cleopatra, Catherine The Great, and Wu Zetian and the line is appropriately entitled, the Empress Collection.  The idea gives patrons the chance to self-identify as one or the other, or to build up her own collection.  Each scarf details elements of the power woman’s reign and tells a story of its own.  The designs are as vibrant and flowy as a fairy tale, but rooted in historical truths.  Alongside of her scarves Amrita Sen Designs offers throw pillows with the same artwork.  The possibilities of her power dynamic vibes are endless.

But let’s back up.  Who are these heroines?  Here are some basics to help you decide where to start:

Cleopatra maintains an aura of mysterious sensuality.  According to legend, the Ancient Egyptian ruler ordered her ship’s sails to be soaked in perfume before sailing to meet Roman general Marc Antony.  A woman of extravagant taste, she owned her own perfume-making facility and many of her beauty rituals are still celebrated today.  Much of her reign involved diplomacy, maintaining Egyptian independence from Roman rule in 1st century BC.  She knew nine languages and was highly educated in mathematics, astronomy, philosophy, oratory, and nearly every subject known to ancient scholars.  She was highly popular with her people and the last ruler of Egypt as an independent state.

Catherine The Great became Queen Regent of the Russian Empire in the 1700s.  She is known for her interest in culture and she encouraged prosperity of all the arts including literature, painting, sculpture, and gardening.  Her reign helped establish Russia as a leading world power.  She funded the education of women, and is known for presiding over the Russian Enlightenment.  She extended the Russian Empire by 200,000 square miles and is Russia’s longest ruling female.

Wu Zetian was the only woman to ever be officially appointed sovereign ruler of China.  She used strategic maneuvering through the system to achieve such a powerful status.  During her reign in the 7th and 8th centuries she recruited citizens through an examination process, appointing those who showed promise to government positions.  Her legacy involves a fascinating approach to strategy and the promotion of otherwise underprivileged Chinese.  Her effective political maneuvering is still studied by academics today.

The US-based designer is also a singer and producer of Indian-themed products.  Her ambition seems to spill out over the edge of these beautiful scarves, adding freshness and class to powerful female-led stories.  With the beginning of spring and Women’s Day upon us, the Empress Collection is worth perusing.  Such an empowering message can flow from these silky and colorful designs.

In Amrita Sen’s words, “I think I have found a way to bridge all of my worlds – my immigrant upbringing, my music, my art, my family, and even my business background – by telling the stories that inspire me and hopefully will inspire others.”

Check out this upcoming designer at Wayfair, Walmart, Barnes & Noble, Bed Bath and Beyond, Shop NBC, Dillard’s, and Nordstrom, as well as an exclusive collection at Pier1.com.  You can follow her on Instagram at @amritasendesigns or check out her website: https://amritasen.shop/ .