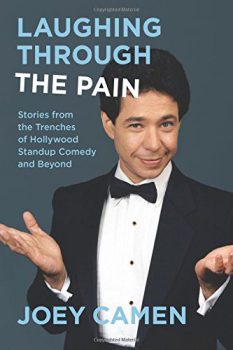 Super-funny, but at times super-serious, this thought provoking autobiography is the life story of Joey Camen; a white Jewish kid growing up in black neighborhoods in Detroit, making his way into the world of Hollywood show business.

The story follows Joey from a not so pleasant home life — dealing with an abusive father and oddball siblings — to leaving home at seventeen to become one of the youngest professional stand-up comedians ever… where Joey quickly found himself working nightly with comedians Richard Pryor, Robin Williams and many other famous names.

Enjoy this up-and-down tale of survival, laughs, and heartache — engagingly written by someone who has spent four-plus decades in the world of entertainment and beyond.

At nineteen I became friends with Cheech and Chong. That was a thrill. I had met Cheech first. I got off stage one night after doing my act in the Comedy Store’s Original Room and sat on a bar stool in back of the club. There was a very pretty blonde-haired blue-eyed lady seated two stools away. She turned towards me and told me she thought I was funny. I thanked her. I tried to make idle chit-chat with her when this moustached little Mexican guy walked over to us. He was wearing a two-piece blue jean denim suit with a matching hat.

He also told me he thought I was funny and how much he enjoyed my act. I thanked him. Then he extended his hand to introduce himself and we shook hands. He said his name which I didn’t hear very clearly. When I didn’t react to his name he loudly exclaimed, “I’m Cheech. Cheech and Chong!” Well, was I shocked and pleased. Wow. I was a huge fan of theirs having listened to their comedy albums in high school. Cheech then invited me to a show he and Chong were doing later in the week on the Sunset Strip at the infamous Roxy nightclub their then-manager Lou Adler co-owned. Oh, and the very pretty blonde-haired blue-eyed lady I was trying to talk to at the bar, was Cheech’s wife, Rikki.

The Cheech and Chong show I attended at the Roxy was funny and exciting. They played to a packed house and were terrific. Afterwards I went backstage to their dressing room and met Tommy Chong for the first time. He was a very friendly guy. The first thing he said after I complimented him on a great show was, “Good to meet you, Joey. Yeah, I hear you’re really funny. Cheech did your whole act for me.” I half smiled. What a compliment. To have Cheech remember my entire act and do it for Chong. But the next thought that went through my head was, “What if they take my material?” They never did, of course.

One fun thing about going backstage to meet Chong; there were a bunch of musicians hanging out with them after the show. One I recognized immediately. He may have been obscure to many, but I knew who he was as soon as I saw him. He was a tall blonde guitarist named Davey Johnstone from Elton John’s band, and with him was the singer Kiki Dee, who had done duets with Elton. I got to meet them and that too was a thrill. It was night to remember.

I hung out with Cheech and Chong off and on for a couple of years, mostly with Tommy Chong. They were good guys. I told Mitzi I had met them and she had no idea who they were. I was dumbfounded. She owned a comedy nightclub in Hollywood and didn’t know who Cheech and Chong were? I explained to her how popular they were and that they sold millions of record albums. Eventually she booked them do a few shows in the Main Room. They sold out right away. Was I ever thanked? No. Welcome to showbiz.

Cheech and Chong had a friend, Tony Viscarra, who worked as their go between and road manager. Tony and I used to hang out every now and then. Tony had an interesting bit of history. When he was twenty years old he married Sally Marr, who was twenty eight years his senior. Sally was the mother of legendary comedian Lenny Bruce. Tony told me Lenny used to have a line in his act where he’d say to the audience, “I must leave you now; I have to get up early. I need to take my dad to school.” Sally Marr loved to hang out at the Comedy Store and watch the comedians. She befriended me and we’d talk from time to time.

She once told me, “You remind me of Lenny.” Wow. She thought I reminded her of her son, the amazing Lenny Bruce. I actually thought that was ridiculous. My act was nothing like Lenny Bruce’s. Later on I found out she said that to many of the comedians. It was her way of giving a compliment and letting people know she was Lenny Bruce’s mother. Many years later she told the same thing to Sam Kinison, who took it very seriously. When Sally was going through a rough time in her life, Sam gave her 100,000 dollars. I didn’t have the heart to tell him, he wasn’t the only one she told that to. Sam Kinison’s material wasn’t anything like Lenny Bruce’s. Lenny Bruce was a brilliant social critic and satirist. I think what Sally meant when she told Sam that he reminded her of her son, was that they both got high a lot.

Sally was a loveable, trash-talking Jewish grandmother, and you never knew what foul words or misconstrued statements would come out of her mouth. She was also one of the first ever female standup comedians in the United States. And she was very eccentric. She once came to the Comedy Store in the pouring rain wearing a hefty trash bag as a raincoat and thought nothing of it. I also became friends with her granddaughter, Kitty Bruce, Lenny Bruce’s daughter. Kitty was fourteen months older than me and also fun to hang out with. She resembled her mother, Lenny’s ex-wife, Honey Harlow, a well-known exotic dancer. She was very pretty. When I first met Kitty she was dating the late Freddie Prinze, who was known for his standup appearances on the Tonight Show with Johnny Carson, and then became the star of the 1970s sitcom, Chico and the Man.

Famous musicians and singers used to hang around Kitty, including Emilio “Mimi” Castillo of Tower of Power, Steve Winwood of the band Traffic, and Liza Minelli, who encouraged Kitty to take up singing. Even Keith Richards of the Rolling Stones hung out with Kitty. Kitty had an infectious personality. These famous musicians liked the fact that she was Lenny Bruce’s daughter. They were huge fans of her late father. Kitty told me a story about Keith Richards and her grandmother Sally which is too good not to share.

Kitty and Keith were out partying in Hollywood one evening and they were getting wasted on booze and who knows what else. Keith somehow got Kitty home in one piece. Home to Kitty then was living with Grandma Sally in her West Hollywood apartment on Hayworth Ave. It was three in the morning and Keith Richards could barely stand. They had woken up Sally. Sally got out of bed and went into her living room to find Kitty and Keith, both totally out of it. Kitty asked Sally if Keith could sleep on the couch and stay overnight. Now I can’t imagine what a high out-of-his-mind Keith Richards looked like to an elderly Jewish woman, especially to someone as wacky as Sally Marr. Sally started screaming for Kitty to get Keith Richards out of her house immediately, right in front of him. Kitty pleaded with Sally, “But Grandma he’s in the Rolling Stones.” Sally screamed, “Rolling Stones, Schmolling Stones, get him THE FUCK OUT OF MY HOUSE!” Keith was shown the door.

This month’s Featured Story sponsored by…