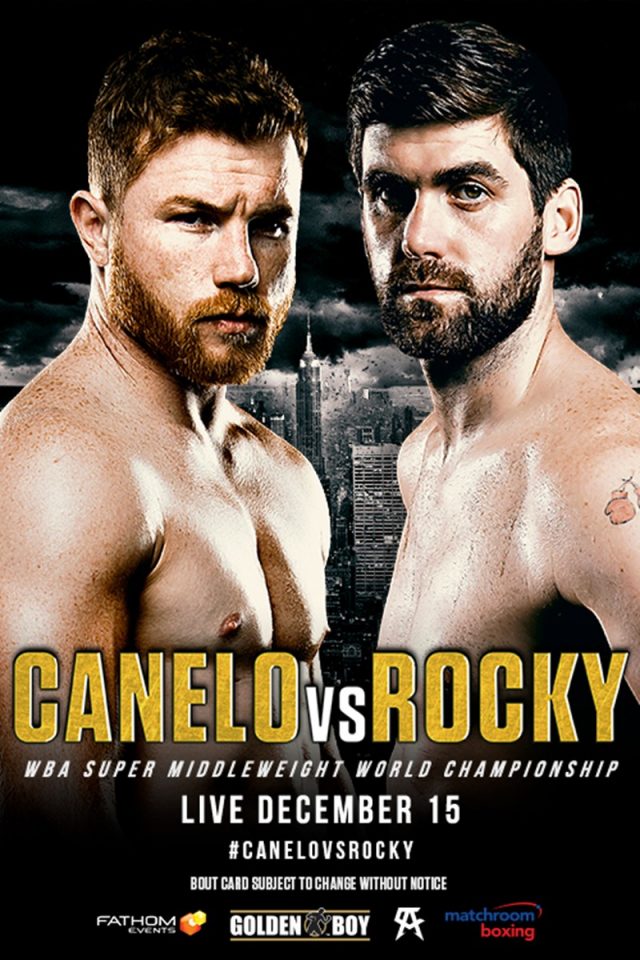 Broadcast live from the historic Madison Square Garden in New York City, boxing fans can catch all the action in their local cinemas as Canelo challenges Rocky for his WBA Super Middleweight World Title in what is certain to be a thrilling 12-round main event.

In the co-main event, middleweight knockout sensation David Lemieux (40-4, 34 KOs) will look to make a second potential Knockout of the Year performance before 2018 ends as he takes on Tureano Johnson (20-2, 14 KOs) in a scheduled 12-round battle.

Tickets for “Canelo vs. Rocky” can be purchased online at www.FathomEvents.com or at participating theater box offices. 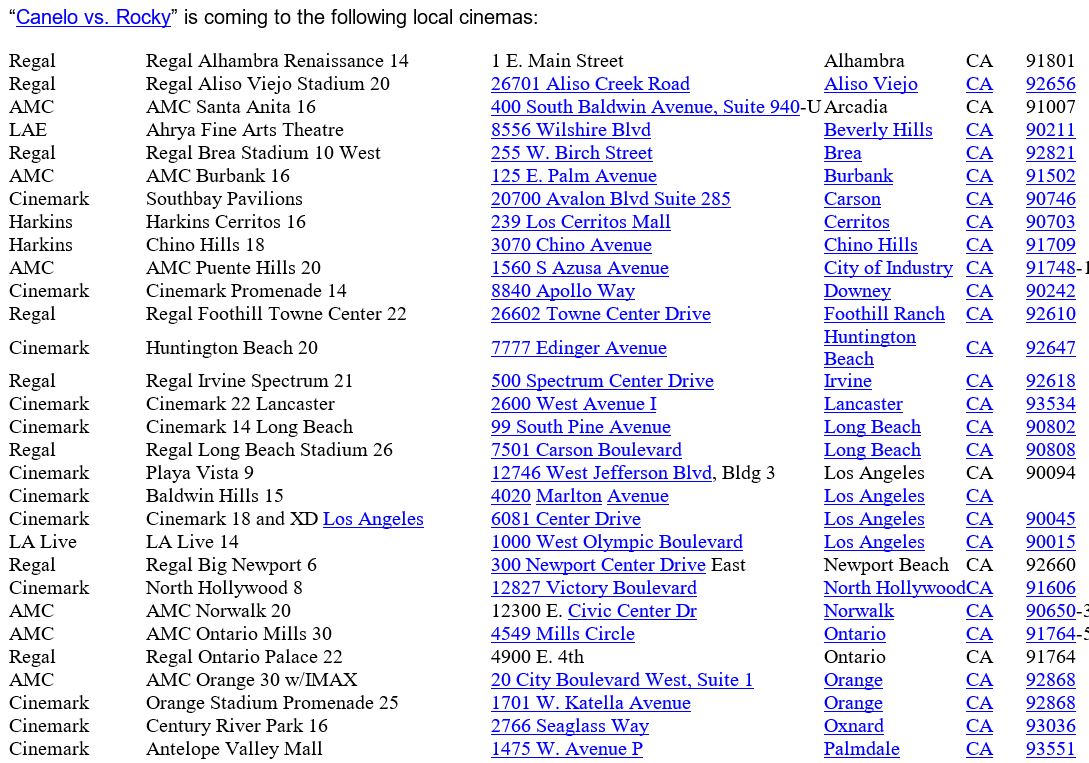 The live broadcast of “Canelo vs. Rocky,” presented by Golden Boy Promotions and Fathom Events, is set for Saturday, December 15 at 9 p.m. ET/ 8 p.m. CT/ 7 p.m. MT/ 6 p.m. PT/ 5 p.m. AK/ 4 p.m. HI. Fans throughout the U.S. will be able to enjoy the event in more than 500 select movie theaters through Fathom’s Digital Broadcast Network (DBN). A complete list of theater locations is available on the Fathom Events website (theaters and participants are subject to change).

A 31-year-old native of Liverpool, England, Fielding will be making his U.S. debut as he defends his title against one of the biggest names in boxing. Fielding has only suffered one loss in his career as he worked his way up the division through some of the toughest fighters in the U.K. Fielding’s last fight was in July, a victory over Germany’s Tyron Zeuge to capture the WBA Super Middleweight World Title.

“This is great way to watch Canelo make history as he steps up in weight to win a world title in a third division,” said Oscar De La Hoya, Chairman and CEO of Golden Boy Promotions. “I’m pleased that fans will be able to watch this event at local cinemas across the nation.”

“With each of his fights broadcast in cinemas, Canelo continues to enthrall boxing fans coast to coast,” said Ray Nutt, Fathom Events CEO. “We’re pleased to partner once again with Golden Boy, and for the first time with Matchroom and DAZN, to bring this highly-anticipated bout to fans nationwide.”

Canelo vs. Rocky is a 12-round fight for the WBA Super Middleweight World Title presented by Golden Boy Promotions in association with Matchroom Boxing. Lemieux vs. Johnson is a 12-round middleweight fight presented by Golden Boy Promotions and Eye of The Tiger Management. The event is sponsored by Tecate, “THE OFFICIAL BEER OF BOXING,” and Hennessy “Never Stop. Never Settle.” The event will take place Saturday, December 15 at Madison Square Garden in New York City and will be streamed live on DAZN.

Globally, DAZN is a live and on-demand sports streaming service created by fans, for fans, that is leading the charge to provide access to sports anytime, anywhere. DAZN guarantees no long-term contract, no bundles, just one affordable price for access to all the service’s sports on connected devices including Smart TVs, smartphones, tablets, games consoles and PCs. DAZN is currently available in Germany, Austria, Switzerland, Japan, Canada, Italy and now the U.S. at just $9.99 per month after a one-month free trial – where it is set to become a must-have service for fight fans, with 100+ fight nights already lined up from Matchroom Boxing, Bellator MMA, the World Boxing Super Series, Combate Americas and the newly announced Golden Boy Promotions.

Los Angeles-based Golden Boy Promotions was established in 2002 by Oscar De La Hoya, the first Hispanic to own a national boxing promotional company. Golden Boy Promotions is one of boxing’s most active and respected promoters, presenting shows in packed venues around the United States on networks such as HBO, ESPN, ESPN Deportes, EstrellaTV and the newly announced partnership with DAZN.