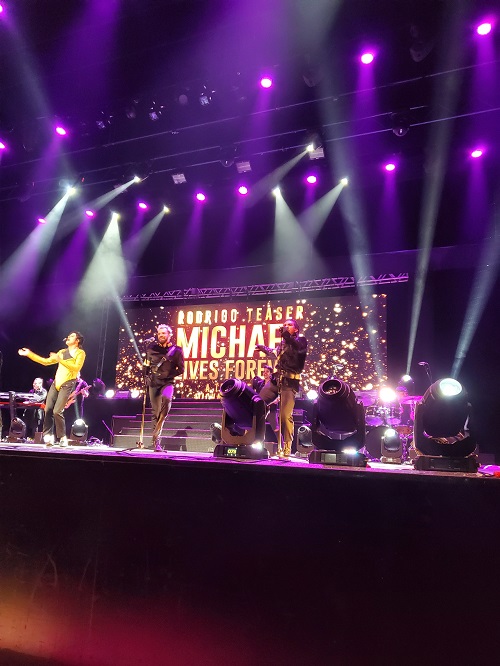 The concert was held in the smaller theater, which you enter in the back of the building.  Sure is a nice looking theater with a couple of concession stands for some theater popcorn, pretzels, candy, soda, beer and well drinks.  We took a couple of photos of  MJ fan.

There was also Rodrigo Teaser merchandise celebrating this first US tour. Rodrigo had his first US show in New York and then he went to Orlando Florida.  We were all so excited once the lights went off and on to let us know that the show was about to start.  We took our seats, which where front row to the right-hand side.  Great seats indeed. 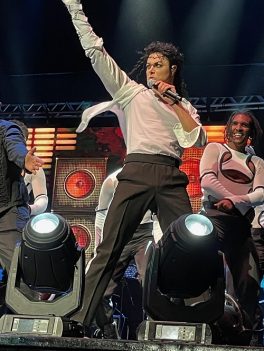 We were able to take great photos and let me tell you, Rodrigo Teaser did not let any of his fans or Michael Jackson fans down. He was amazing with his singing voice, that sounded just like MJ. His outfits were spot on and I have to say, his moves gave me goosebumps and brought tears to my eyes. It was like I was at a Michael Jackson concert.

Not only is this the first time Michael Lives Forever will be performed in the U.S., but it will also be the first time that Lavelle Smith, Kevin Dorsey, and Jennifer Batten have performed together since Michael’s passing in 2009. When asked about coming together with Jennifer and Lavelle, Kevin Dorsey said, “We’ve circled the globe together making history. I can’t think of another two that I would rather have my last dance with!” The  special reunion and tour kicked off in New York City on June 25th on the 13 year anniversary of Michael’s passing. 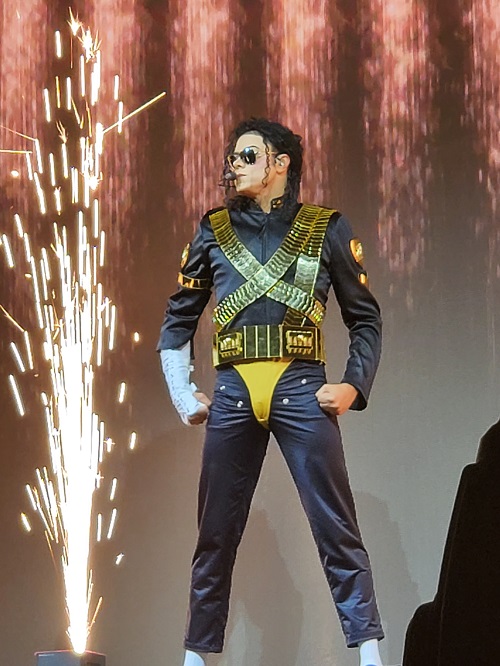 Rodrigo Teaser on stage as Michael Jackson at the Wiltern TheatreOne of my favorite songs of Michael Jackson is “Thriller” and Rodrigo did not disappoint me or the audience.  Loved the Zoombies too!

When Rodrigo performed “Heal The World” his production team brought up some kids from the audience. It was a great touch.

More photos of Rodrigo Teaser as Michael Jackson performing many of MJ’s hits.

Here are some videos.

Here is list of songs that Rodrigo performed that night.

Rodrigo Teaser first started imitating Michael Jackson at the age of 9 competing on local TV shows in Brazil. In 2005 Rodrigo was selected to be highlighted on Michael’s website as one of his top imitators and was asked to perform at a celebration party following his court case. He was then invited to New York City to perform at “30 Years of Magic” an event that highlighted imitators from Latin America. While back in Brazil Rodrigo was already starting to develop a name for himself as Michael Jackson impersonator sharing the start with some of the country’s top artists. Following Michael’s passing in 2009 Rodrigo had the idea to put together a mega tribute show. This wasn’t going to just be him performing the songs and doing the dance moves, Rodrigo wanted to go all out, to replicate Michael’s live show using a live band, dancers, costumes, special effects, scenic lifts, LED screen and more! Rodrigo even enlisted the help of Michael’s longtime choreographer Lavelle Smith, who came down to Brazil to help put the finishing touches on the Michael Lives Forever performance. In 2017 Michael Lives Forever was selected to perform at one of the world’s largest music festivals “Rock In Rio” where Rodrigo performed alongside artists like Justin Timberlake and Lady Gaga. In 2019 Michael Lives Forever made its European debut to a sold out crowd of over 15,000 people in the Czech Republic.