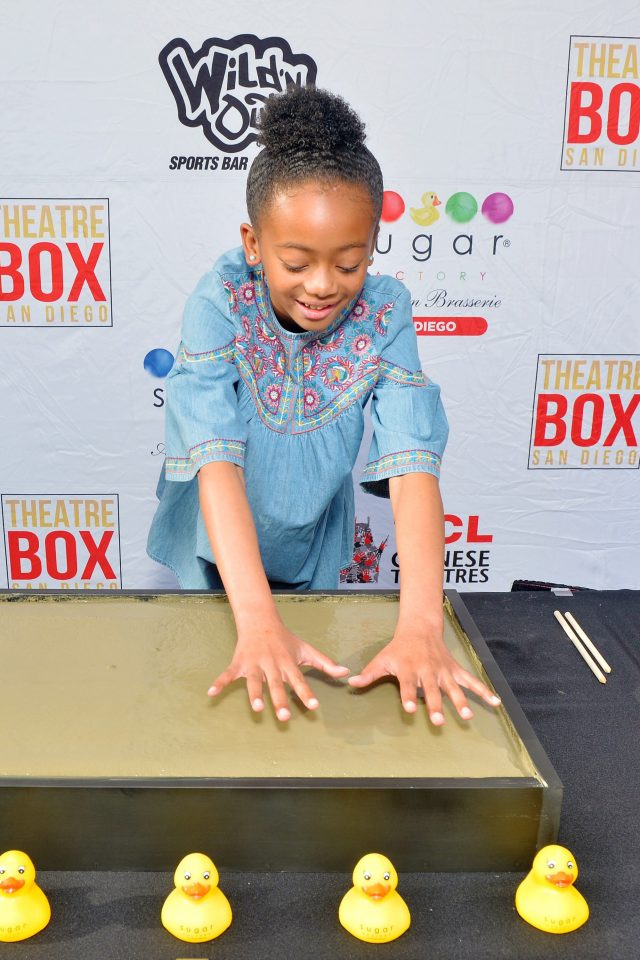 Actor and San Diego native, Faithe Herman, known for her roles in the award-winning “This Is Us” and the recently released film, “Shazam!,” was honored with a handprint ceremony in the longstanding tradition of TCL Chinese Theatres at Theatre Box®, the new luxury theatre, dining and entertainment complex located at 701 Fifth Ave. in the Gaslamp Quarter.

Herman’s “This Is Us” cast mates Mackenzie Hancsicsak, Lonnie Chavis and Lyric Ross also attended the event on Friday, April 5 to support Herman and celebrate the release of the superhero film.

The ceremony was emceed by Derrick Malbrough, known as D-Rock on Jammin’ z90’s Morton in the Morning radio show.

Herman and her “This Is Us” castmates were in high spirits as they posed for photographs on the red carpet before filling up signature theatre boxes full of their favorite candies inside Sugar Factory at Theatre Box.

Since 1927, TCL Chinese Theatre IMAX has been a home to some of the most important, star-studded, red-carpet movie premieres and special events, attracting Hollywood’s biggest and brightest talent to come watch their movies. The internationally-renowned theatre is recognized for its unique forecourt of the stars, featuring cement hand and footprints of Hollywood actors and actresses throughout the decades, from Marilyn Monroe and Brad Pitt to Tom Cruise and Sandra Bullock. In 2013, the main theatre relaunched to become the world’s largest IMAX® theatre. Every year, more than six million people visit the site, marking TCL Chinese Theatre as one of the world’s most popular tourist destinations. More information is available on the website at www.tclchinesetheatres.com, and on Facebook at www.facebook.com/TCLChineseTheatres, and Twitter and Instagram at @ChineseTheatres.

Sugar Factory offers a sweet escape with locations throughout the United States, including the newest locations outside of the Fashion Show Mall in Las Vegas and in New York City on Broadway, a goblet bar and retail locations at the Miracle Mile Shops inside Planet Hollywood Resort & Casino in Las Vegas, retail stores at the Barclays Center in Brooklyn, TCL Theatres in Hollywood, Union Square in Washington, D.C. and at McCarran International Airport at the D Gates. Additionally, Sugar Factory American Brasserie, complete with retail and the brand’s popular restaurant, can be found in New York City, Chicago, Pentagon City, Connecticut at Foxwoods Resort Casino, Orlando and South Beach Miami. The brand will expand into new domestic markets this year with a planned opening in Seattle and two Artisanal Doughnut and Coffee Bars in New York. The brand expanded internationally with its first retail store overseas in Bahrain and restaurants at Festival City Mall and CityWalk in Dubai and in Manila, Philippines. Additionally, Sugar Factory NYC was listed “The Most Instagrammed Restaurant in the United States” in 2016 and Sugar Factory Ocean Drive was also the only Florida restaurant to make the list.