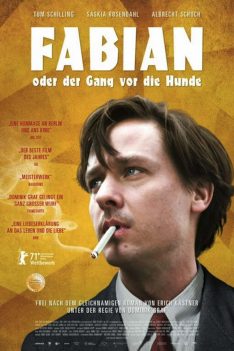 Los Angeles, CA (The Hollywood Times) 10/25/21 – On Sunday at the Aero Theatre in West L.A., was a screening of Dominik Graf’s Fabian: Going to the Dogs (Fabian, oder Der Gang vor die Hunde, Germany, 2020), based on the 1931 novel of Erich Kästner – Fabian: The Story of a Moralist. Originally published in German in 1931 and in an expurgated English translation in 1932, this novel is the tale of Jacob Fabian, a Berlin advertising copywriter doomed in the context of economic, ethical, and political collapse by his characteristic mixture of detachment and decency. Fabian is a middle-of-the-road liberal, an Enlightenment rationalist, a believer that the public condition reflects prevailing private moralities, and a skeptic toward all ideological nostrums. Richly detailed and vividly plotted, Fabian remains an unparalleled personalization of the collapse of the Weimar Republic. Fabian was the closing night film of German Currents this year, a program co-sponsored by the Goethe Institute and the American Cinematheque.

As the film opens, Graf takes the viewer down a set of stairs into a Berlin subway station, across the platform where passengers dressed in modern clothing disembark the train, and out into the light of day where it’s now 1931 and posters touting the Third Reich can be seen plastered across the city’s concrete walls. Based on the novel by Erich Kästner, Fabian or Going to the Dogs freely adapts the German author’s Weimar Republic-set romance in a way distinct to Graf’s unbound, kinetic style, in which eras of cultural and cinematic history are made to mix uninhibitedly and without recourse to any one tradition. German writer Erich Kästner (1899-1974) first gained popularity in the 1920s as a political satirist. He was one of the most successful left-liberal authors of the Weimar Republic. Through his writings and lectures, Kästner stressed the brutality of World War I (and we see glimpses of maimed and wounded veterans in the shadows of this film as well). He was also the author of a number of popular children’s books, especially Emil and the Detectives. At the famous book burning of 1933 by the Nazis, Kästner’s books were thrown into the fire.

Graf applies his flair for dynamic storytelling and dazzling set pieces to Kästner’s uniquely autobiographical, character-driven novel, which follows a young copywriter named Jakob Fabian (played in the film by Tom Schilling) who’s abandoned the literary prospects promised by higher education for a life of social and sexual freedom. Unlike his best friend Stephan Labude (Albrecht Schuch), a zealous but troubled socialist, Fabian is mostly content to indulge the pleasures of Berlin’s nightlife rather than engage with the era’s burgeoning political turmoil. When one night Fabian meets Cornelia (Saskia Rosendahl), an aspiring actress who works the till at a tawdry cabaret, he’s drawn to the young woman’s candor and cosmopolitan worldview.

Jakob Fabian (Tom Schilling) is actually a shell-shocked war veteran with a literature degree who’s settled for work as an advertising copywriter, in the midst of a raucous night out. Fabian goes home with an older woman (Meret Becker) only to discover that he needs to sign a contract with her husband in order to sleep with her, and may even be entitled to compensation for doing so. Disturbed by the cynical mixture of decadence and businesslike procedure that underlies his diverting Berlin nightlife, he flees back into the night.

Here and elsewhere, Fabian is unable to cope with the ethos of the times, the desperation-fueled abandonment of human relations that determines the life path of nearly everybody he comes across. An incompetent co-worker steals his idea for an ad campaign and he ends up jobless, and soon after meeting and falling in love with Cornelia (Saskia Rosendahl), an aspiring actress who coincidentally lives in his building, Fabian is forced to accept that she’s become the mistress of a film producer in order to get a foothold in the movies.

The upper-class Labude (Albrecht Schuch), a colleague from Fabian’s PhD program, represents an exception to the insidious cynicism of society at large. Profoundly anxious over his postdoctoral thesis on the Enlightenment playwright Lessing, Labude is also an active social-democratic rabble-rouser and an agitator for the principles of reason and justice. With his ideals, the man, like the commuters waiting on the train platform at the start of the film, seems to have come temporally unstuck, his thoughts not suited to the times – which is perhaps why the more disaffected Fabian always seems to have the final word in their conversations. At one point, when Fabian defends himself for merely observing rather than acting, Labude asks, “Whom does that help?” Fabian’s defeatist reply, “Who is to be helped?” casts a shadow over the whole film.

Across the film’s three hours, Fabian, Cornelia and Stephan’s relationships meet opposing fates as the trio’s individual ambitions and ideologies come up against various cultural and institutional pressures that together signal the rise of a wider authoritarian mentality that would soon reach across the whole of Europe. Graf uses these sociopolitical particulars as a backdrop to tell a more intimate tale of friendship and tragic romance. Following an energetic opening act in which the story and its three characters are introduced in a furious montage of sexual imagery, Super 8 archival footage, flashbacks, voiceover narration and split-screen visuals, the film settles into a largely romantic register that Fabian and Cornelia’s differing aspirations will slowly work to disrupt as the latter’s desire to become an actress forces the former to question his lover’s motivations, as well as his own feelings about the nature of romance. (“I think I’m waiting for a chance to be faithful,” he tells Cornelia at one point.) Meanwhile, Stephan, sensing an inability to bring about any real social change, falls into a pit of sex, drugs and mental anguish.

With its sweeping narrative scope and themes of doomed love and nascent socialism, Fabian or Going to the Dog resembles at times a hedonistic and freewheeling social satire. Graf seems more interested in depicting how his characters’ shared sense of fatalism and powerlessness embodies a generation lost to encroaching fascism, and how those ideas in turn have brought about new forms of oppression. The film ends on an image of a glowing red fire accompanied by newsreel audio announcing the Nazi campaign against the Jews – the sparks, as one character calls it, of “an eternal postwar chaos” that in many ways rages on to this day. Kästner’s darkly satirical book turns a rather sober glance toward a society in which its author was embedded, while the film, with its bricolage of images and the dream logic of its temporally dislocated places and grotesque caricatures, conjures a shared nightmare of the past.