Los Angeles, CA (The Hollywood Times) 11/5/20 – A couple-three things. First, I have to start off with a tremendous thank you to Chad Rubel and CBS for authorizing this interview. Second, there’s an adorable little anecdote no one asked for that I’m gonna add in here just so that I never forget it.

I sent my questions to Chad’s email as directed, and I received a response almost immediately. Here it is: 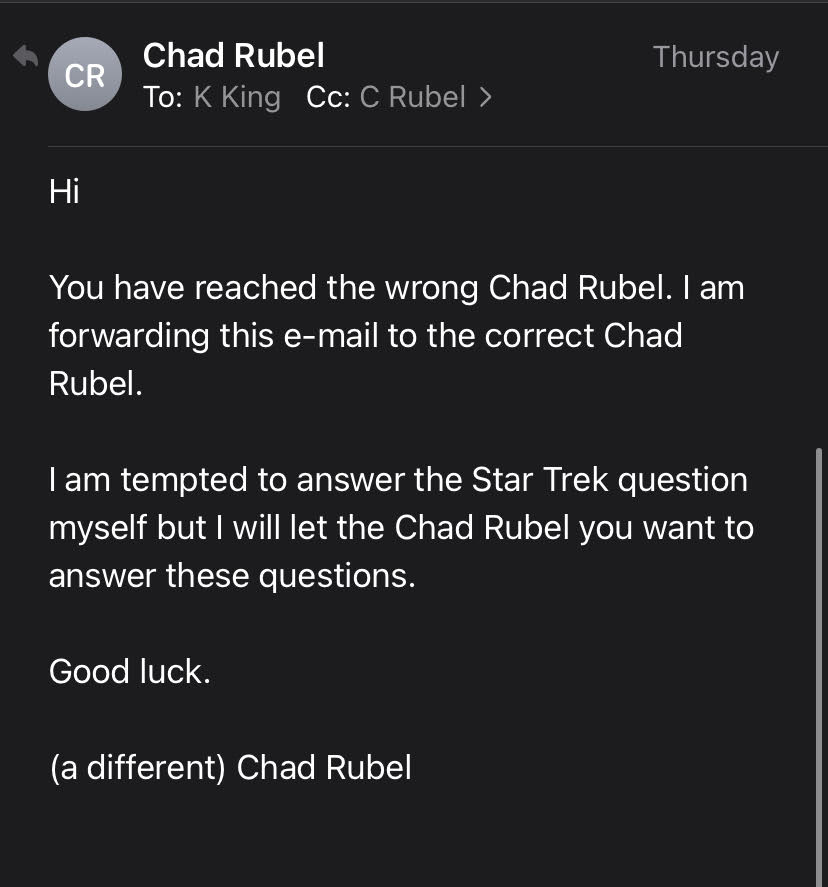 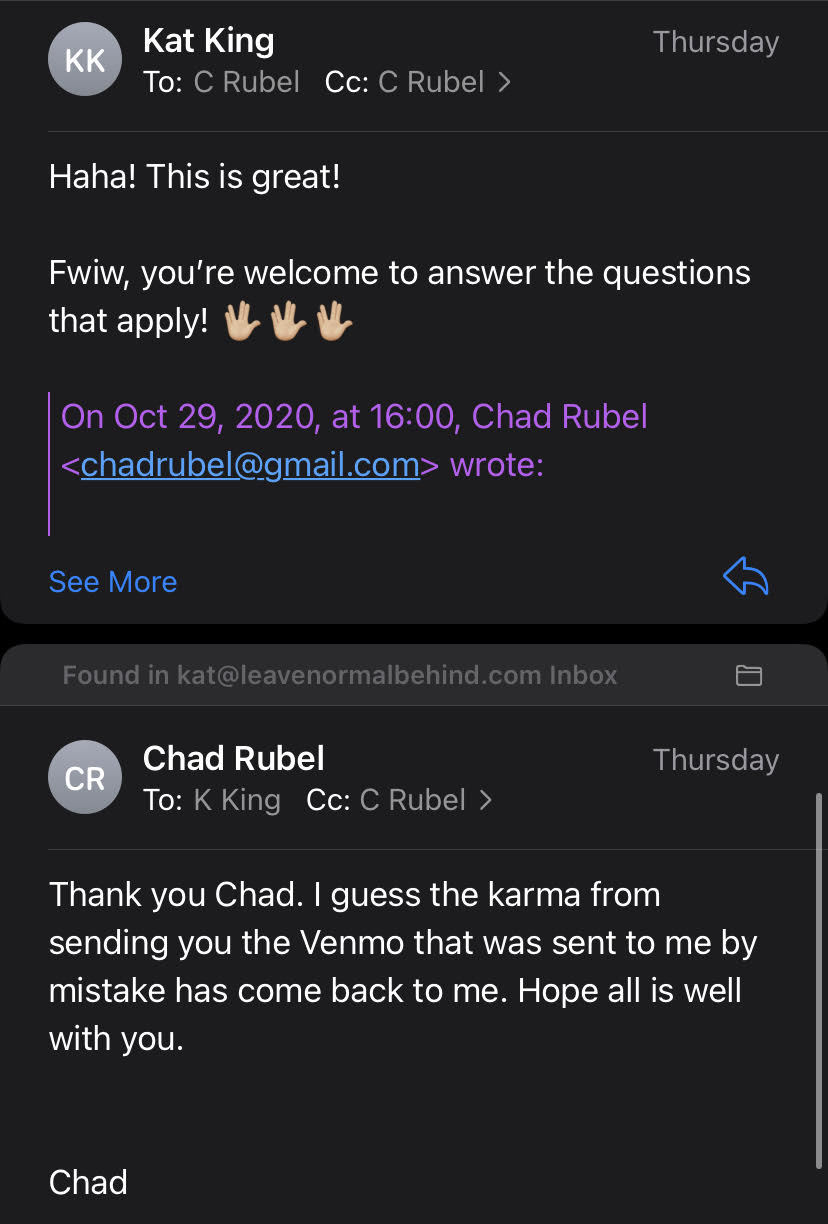 I just love it when fun little mishaps like this happen, don’t you? P. S. Still waiting on Different (possibly Mirror Universe?! Gasp!) Chad Rubel’s responses to my “fave Star Trek character” questions!  You’re not off the hook yet, mister!

And now for a bit of biographical info about OUR Chad, the real Chad! Our Man Chad Rubel, Patron Saint of Editors Working From Home, in his own words:

“I did a semester in Los Angeles with Ithaca College in the Fall of 2000, graduated college early and never left LA. I am originally from New York. I am a father of two boys, 8 and 6 years old.”

Amazing! So glad to have this time with a fellow editor to dig deep into the process of making Season 3, um, well, happen. Without editors, we’d essentially be watching a play. The art of editing lies in both the eye and heart of the Editor. Its power cannot be overstated. The Editor controls the emotional current, the plot and the pace in ways no other member of the team can—not even the director. Of course, a unique symbiosis between the two can result in extraordinary art that not only reaches the viewer but keeps them “in the story”, as it were. There’s nothing more than most Trekkies want than for Star Trek to be real, or to feel immersed in the world of the Trekverse, and I have to say the Disco team is simply nailing it on VFX.

So let’s get to our Q & A, shall we? This information comes directly from a member of the “Star Trek: Discovery” editing team and has been shared exclusively with me at the express approval of CBS, so it’s legit nerdy, which makes it eyegasm-inducing editor-porn for Techies like me. Yes, I said it.

For your convenience, I’ve placed Chad’s amazing responses to my questions in bold.

Kat: What was the biggest challenge for you as an editor, given the pandemic forced your whole team into working from home?

Chad: The biggest challenge as far as the pandemic was just getting everything set up to work in my house. We were inventing new workflows on the fly, so the first week was quite rough. Our Avid rental company, PacPost, came up with a way to stream my cuts in real-time to producers. I was able to get notes and make the changes on the fly. It worked great. I locked my last two episodes(309 & 312) during this Work From Home period. Everyone was understanding and patient cause we were figuring things out as we went.

I was blown away by the other Post Departments and what they have done Working From Home. Once we figured out streaming my cut from home, my job was back to normal besides the personal interactions. I still can’t believe how well Music did, having to score separately from home. Or how we got everyone to do ADR. To keep the quality of our VFX is truly amazing. It is really a credit to how well this Department is run.

Kat: What would you say is your proudest moment, maybe a specific choice, as an editor, for you in this week’s episode?

CR: I love it when I can set things up early in an episode to help the payoff later on. An example of this is when the Discovery arrives on earth, I am using the reactions of the crew members who you see at the tree at the end of the episode. Since we are less connected to Nilsson and Bryce, I want the viewer to connect to them a little better and earlier in the episode.

It’s those editing choices that read on a subconscious level that helps pay off later. On all the Bridge scenes, I tried to sprinkle in more reactions from the cast from the last scene in “People of Earth”. There is a beautiful rack-focus between Nilsson and Bryce when Saru gets in the captain’s chair. I couldn’t have added that beautiful shot without the Director, Jonathan Frankes, and DP, Crescenzo Notarile, creating that moment for me.

In regards to Saru getting promoted to Captain, I felt like I have been sitting on a secret for a long time. It is so great to have that out and the fan’s reaction.

KK: What does Star Trek mean to you, personally, and how has your life changed since joining the Disco team? Is this “just another gig” or is there special meaning attached to this project for you (as it relates to the franchises 55-yearlong legacy and over-arching themes)?

CR: I love getting to be a small part of the Star Trek family and legacy. I grew up watching TNG and have very fond memories. This is the first show that I have gotten to connect with fans who have treated me with such kindness. It’s also nice to have your friends and family already watching your show without me asking them.

My father-in-law was a huge Trek fan and even was invited to see the set of TOS in the late ’60s. He passed away before I met my wife, but in some weird cosmic way, when I got this job I felt like I finally got his blessing to marry his daughter.

KK: In what other ways has COVID impacted your life?

CR: As crazy as COVID was for my life and my family, I keep telling myself that we are the lucky ones. My heart goes out to everyone cause even if you don’t catch it, we are still dealing with its ramifications on a mental level.

On the flip side, Working From Home has caused my wife to be in charge of my meals instead of my poor choices in the office. So I am eating much better and I have replaced my commute with a morning walk. I am the healthiest I have ever been to. I have always tried to be a cup half full person. That’s how I relate to Star Trek’s optimism.

KK: How did you discover your calling as an editor, or is there another aspect of production you’d like to explore someday?

CR: My first exposure to editing was at my high school that had its own TV studio. Editing was something that I immediately gravitated towards. Something about being on my own and being able to create something really appealed to me.

It would be great to get to direct someday. A lot of Editors find a path to directing on TV. This season, one of our Editors is directing their first episode of Star Trek Discovery and he did an amazing job. For now, I want to focus on my editing work and the opportunity will come when it comes.

KK: Are there any other projects you’d like/are able to discuss with us that we can share out so that folks can see more of your work? 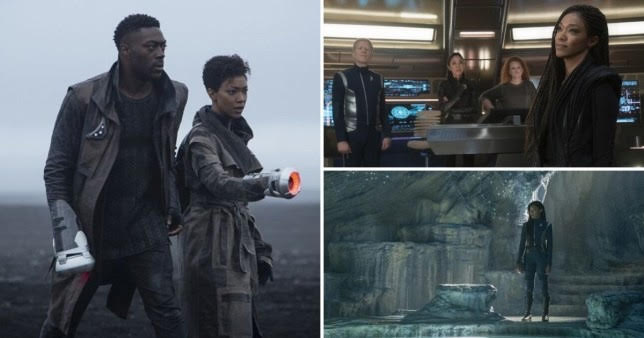 CR: I tend to work on VFX heavy shows, even though no show I have ever worked on before is even close to the amount of VFX work that Discovery has. The first show I got promoted to a full-time editor was Zoo on CBS. That was a fun show to work on the cause when it was working, it was a mix of bat-shit crazy and a lot of heart. It was one of those shows that if you were all in on it, it was a lot of fun.

KK: Here it comes. The obligatory “Have you got a favorite Star Trek character, or a few you really admire/enjoy?” question…ready?

CR: Before starting this season on Discovery, I would say that Tilly was my favorite character. After living with these characters and performances, I have really connected with Stamets. There is something about his wit that makes me laugh. “There is no one like me.” I am always glad when I get a scene with him to cut.

Key Takeaway: We’re the lucky ones.