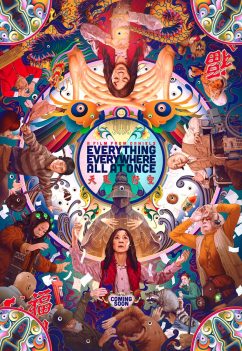 Los Angeles, CA (The Hollywood Times) 4/18/22 – Currently screening at CineLounge in Hollywood and selected theatres in Los Angeles is the latest film from Daniel Kwan and Daniel Scheinert – Everything Everywhere All At Once (2022). The directors collectively known as DANIELS are the driving force behind this seemingly bonkers about a frazzled, overworked Chinese immigrant woman named Evelyn Wang (Michelle Yeoh), who is put through an existential ringer in her own life and in a series of connecting universes into other lives in other worlds. Everywhere All at Once is a metaphysical martial arts epic that thrusts the viewer through physical space with hysterical speed. Both directors come from a background of making music videos and perhaps that explains in part the hyperactive imagery. In a recent interview, director Daniel Kwan offered the additional insight that this film is a reflection of the experiences of people (like himself) who are ADHD. I wish to thank CineLounge and their publicist Philip Sokoloff in arranging for me to see the film at their fine theatre venue in Hollywood.

Everything Everywhere All at Once dwells in a very wondrous, chaotic world, one that is bound by thin rules and occasionally zany nonsense. It makes the film incredibly fun and wholly unpredictable, which is to its benefit. At its center, however, is a very grounded story, bolstered by a moving performance by Michelle Yeoh. She is the beating heart of the film, imbuing Evelyn with anxious tendencies, unbridled energy, and a desperate need to throw everything away and save it all at once. Yeoh conveys the strength, apprehension, and earnestness required to make Evelyn’s emotions feel as deep as they do and her nuanced performance delivers.

First, we will see Evelyn (Michelle Yeoh) as she really is, and in what may be the ultimate realm of the mundane, sitting in an Internal Revenue Service office. This exhausted Chinese American businesswoman has been called in for an audit of her Sitting across from Evelyn is Deirdre Beaubeirdra (Jamie Lee Curtis), a straight-laced I.R.S. agent who explains to her in punishingly exacting detail what’s wrong with the documents that she’s submitted with her taxes.

Evelyn is followed by disappointment and carries the weight of the world on her shoulders. Her ailing father, Gong Gong (James Hong), who forbade her from emigrating to America, sees her as a failure. Her marriage to the amicable but dull Waymond (Ke Huy Quan) is on the brink of collapse, as is their laundromat business. And her fractured relationship with her daughter, Joy (Stephanie Hsu), is seemingly beyond repair, as signaled by her inability to introduce Joy’s lesbian partner, Becky (Tallie Medel), to her father as anything more than a “good friend.”

Such quotidian struggles may be common to immigrant stories, but Everything Everywhere All at Once is no common immigrant story. When Waymond – or rather, a Waymond from another universe – contacts Evelyn, telling her that he needs her help to defeat the evil Jobu Tupaki, a woman seeking to destroy the multiverse, the film explodes into a kaleidoscopic cornucopia of visual delights, full of increasingly bizarre narrative diversions. And much of this takes place within the corridors and cubicles of the I.R.S. office, which functions as a surrealistic battleground in which Kwan and Scheinert stage a series of innovative action scenes that rivals anything in the Marvel Cinematic Universe. Evelyn is fated to save the universe because she’s the least successful of all the multiverse Evelyns. She is the least likely, and therefore the one that is perfect. The least likely actions are also what allows her to access the skills from the other Evelyns.

As Evelyn learns how to access the skills and talents of her other selves from throughout the multiverse – using a technique called “verse-jumping” – the directors’ feverish mélange of ideas, genres, tones, and emotions pushes the boundaries of mainstream filmmaking. As one may expect from these directors of the recent Swiss Army Man (2016), Everything Everywhere All at Once doesn’t lack for absurdity, which extends to everything from the verse-jumping, which requires increasingly silly acts to initiate, to the film’s numerous fight scenes.

An early scene where Waymond wields his fanny pack against an onslaught of I.R.S. security guards is an unexpected display of martial arts moves but pales in comparison with Evelyn later taking on a pants-less villain wearing a butt plug or fighting another baddie, Big Nose (Jenny Slate), whose savage use of her leashed Pomeranian is definitely beyond belief.

This only scratches the surface of the boldly imaginative twists and turns that Everything Everywhere All at Once takes throughout its runtime may indicate that this is an unwieldy film interested far less in its characters than in throwing an array of stunts, jokes, and ideas at the wall and seeing what sticks. Fortunately, there’s a method to the directors’ madness, even if it takes a while for that to become clear. And thanks to a truly remarkable turn from Yeoh, who rises to the challenge of constantly switching emotional registers on a dime, the filmmakers construct a rich emotional tapestry from deep within the fray.

Ke Huy Quan is a particular standout here, tasked with playing a very confident version of Waymond, a regretful optimist, and Evelyn’s often exasperated husband. More than anyone in the film, Waymond is the glue that holds it all together and the actor’s portrayal is a memorable one. Stephanie Hsu as the daughter Joy bares her soul and the emotions she conveys – anger, frustration, love – are raw and heartbreaking.

For all its chaotic collages of images and ideas, Everything Everywhere All at Once is, at its core, a coherent depiction of a family learning to stay whole in an overstimulated, hyperactive world that traffics in distractions far more effectively than it invites love and understanding. In yet another delightfully ludicrous turn, an everything bagel – in this case, “everything” in the truly literal sense – is revealed to be a portal into oblivion, which the miserable daughter Joy sees as the only escape from her relentless anxiety and depression.

The fixation on alternate timelines ultimately comes from a timely-ish anxiety that we’re now in the darkest one, evident in a vague line about how no one These Days knows their neighbors. The bagel of doom and its tightening grip on Evelyn’s Gen Z daughter lend themselves to the climactic declaration that there’s nothing worse than submitting to the nihilism so trendy with the next generation. Our lone hope of recourse is to embrace all the love and beauty surrounding us, if only we’re present enough to see it.

The film ponders the world and whether anything really matters. Is anything worth fighting for when the chaos of living in a social media-connected world, where everyone is constantly splitting their attention and energy between a constant and devastating news cycle, their own life struggles, and whatever hot button issue is at the forefront? Everything matters and nothing does. Everything Everywhere All at Once sorts through the disarray, allowing Evelyn a chance to understand exactly what the perceived villain Jobu Tupaki (Hsu) feels while simultaneously pushing her to fight for something, anything, even if it all seems hopeless. To that end, the film, even in all of its multiversal action, is endearing and hopeful.