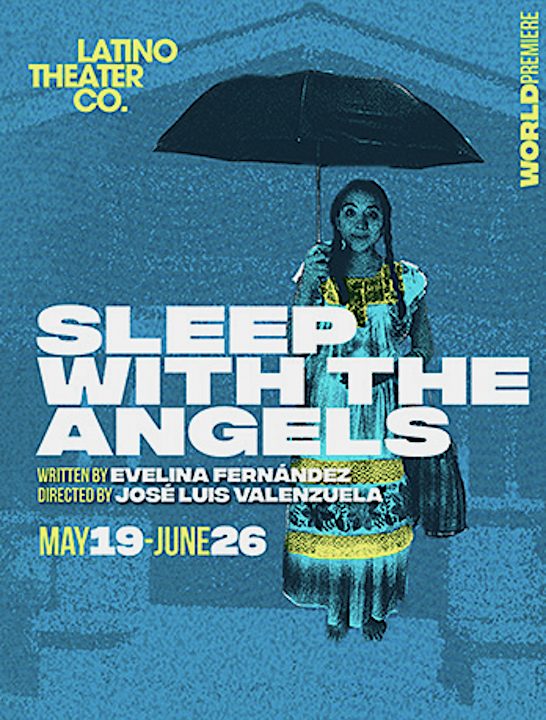 Los Angeles, CA (The Hollywood Times) 5/28/22 – Friday, May 27, was the opening night of a new play Sleep With the Angels, written by resident playwright Evelina Fernández with the Latino Theatre Company. Directed by LTC artistic director José Luis Valenzuela, last night’s performance at the Los Angeles Theatre Center in downtown L.A., was the world premiere on stage. Brilliantly staged, Sleep With the Angels is a story of two LatinX successful lawyers in Los Angeles and their complex lives which try to balance work and family, with challenging results. Molly (Elia Saldana) is a mother who works for a law firm where she is hoping to become a partner. She is quite busy and recently separated from her husband (Randy Vasquez), who is also a lawyer. The couple have two children: Alex (Saul Nieto), a 13-year-old gender-curious son, and a teenage angst-filled daughter named Cindy (Victoria Tamez). The gist of the play is the need for a reliable childcare provider at Molly’s home. As it turns out, a charming younger Mexican woman named Juana, suddenly arrives on the scene to fill the role.

At one level, Sleep With the Angels is a family domestic drama, but playwright Evelina Fernández has introduced an element of magical realism into the play, as Juana (Esperanza America) is “a sort of indigenous Mary Poppins,” who arrives in California from Mexico in a wind storm that somehow transported he across the border. Actually, Juana is the niece of the family’s gardener Pablo (Eduardo Roman) and, when Molly is pining over what to do about her need for a childcare person in the house to look after the kids when she is away on a business, Pablo just happens to have Juana in his truck ready to work in the house. Juana is full of stories and has a bit of the “curandera” in her, as she knows traditional Mexican folk medicine and uses her skills to mediate problems with this LatinX family.

The dynamics of this LatinX family are particularly interesting, and it was the intention of playwright Evelina Fernández to write a play about a family with a Mexican nanny, but a family that was not “white,” but successful Mexican-American Chicanos who don’t even understand Spanish anymore. The values of this Latin X family vacillate between feeling with the heart and understanding the law and its consequences. “Before we realize what’s happening, it has us thinking about serious issues: immigration, homophobia, parent-child relationships, marriage. The magical part is learning to be a real human being, and the complexity of that.”

As Fernández explains in a POD cast made during rehearsals in 2020, the central character is Molly (Elia Saldana), a lawyer and mother of two teenagers. Her two children tend to fight quite a bit. The daughter Cindy (Victoria Tamez) is a bit spiteful and considers herself to be unattractive. The 13-year-old son Alex (Saul Nieto) is seen from the start applying make-up and lipstick, as he is very interested in looking “pretty.” He is quite young and gender-fluid and we are sure he is “queer,” but he is unclear about his own gender identity. Cindy teases Alex about the make-up and charges him with stealing it from her and their mother.As a mother, Molly does not seem too concerned about Alex’s behavior, as she is much more focused on trying to get ahead in the law firm for which she is working. On the other hand, Alex’s absent father (Randy Vasquez), who has not been living at home with them for almost a year, vehemently disapproved of Alex’s seeming effeminate behavior and wearing make-up. Playwright Fernández explains that she got the inspiration for the character of Alex from her own daughter who is an actress but was working briefly as a nanny at one point for a Jewish family in West Los Angeles. The gender-fluid son grew up with nannies and spoke perfect Spanish and even had mariachis at his bar mitzvah. The views of the characters may not be shockingly new, but they are new to plays about Latinx families. Both Alex and his sister Cindy seem quite unhappy with their situation at home. But there comes a sudden change, when Molly’s gardener Pedro introduces his niece Juana into the equation.

Juana (Esperanza America) is the magical center of the play. Her arrival brings change to almost all the characters in the play. From the start, she solves the problem of Alex’s nervous hiccups and offers Cindy a way to get the attention of boy Zac in her high school class. Drawing on Mexican folklore and folk medicine, she can help Cindy find a missing earring by using her statue of St. Anthony and trying the “santo” of the baby Jesus to the back of a chair. She knows how to make a special kind of tea with herbs that will calm the emotions of angry adults and foster a sense of harmony. But her real gift is language and her ability to articulate the wisdom of a woman from another country with a far deeper understanding of human nature. Juana claims that she was transported from Jalisco in a giant wind storm but the metaphor carries other meanings beyond magical realism.

Eventually we come to understand that Juana too has a backstory and that her documents (which she bought in MacArthur Park) are not legitimate. She left Mexico for a reason that she eventually reveals and actually has a 7-year-old daughter that she was forced to leave behind. As Fernández has explained in a POD cast, Sleep With the Angels tells an important story about “the many women who leave all behind and raise other people’s children, when you have your own children in your home country.” The play is never preachy with these issues, as we are too caught up in the magic of Juana’s personality and her ability to reach out to others. She quickly endears herself to Cindy and Alex because she understands their issues with self-image. She tells Cindy that she is beautiful and “on fire.” She accepts Alex’s fascination with make-up and his sexual ambivalence, telling him about her own brother who was kicked out of the family home by her father because he dressed in women’s clothes and wore make-up. She is able to calm Alex’s anxieties about who he is and tucks him in bed like a real Mexican mother with the words “Duerme con los Angeles” (“Sleep with the Angels”).

The one who has the most to learn is perhaps Molly, the mother of Alex and Cindy. Her ambition to become a partner in her boss’ law firm has been determining her life and it is only when a crisis occurs with a disastrous dinner party that she will come to realize that her life needs a new direction. One of the most poignant moments in the play happens when Juana gives Molly one of her specially-prepared tea drinks and Molly breaks into song in Spanish joined by Juana – and later concedes that she does not even speak Spanish.

One of the charms of this fine play is the music and director José Luis Valenzuela insisted that the play incorporate music. Of course, the most musical voice is that of Juana, who sings Mexican ballads, the lyrics of which were written by Evelina Fernández herself with the music by her daughter. The music that floats plaintively through the play like a commentary on the feelings of the characters is accompanied by a man (Robert Revell) with his electric guitar. The impressive set and lighting were created by Emily MacDonald and Cameron Mock.