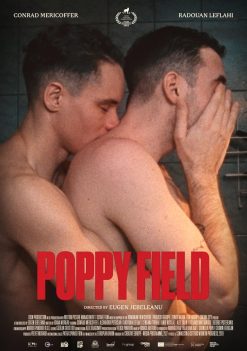 Los Angeles, CA (The Hollywood Times) 4/14/22 – Currently streaming online with Laemmle Virtual Cinema is a debut feature film from Romanian filmmaker Eugen Jebeleanu – Poppy Field (Camp de maci, 2020) and was picked up for distribution by Film Movement after being featured at least 20 different international film festivals. This is a rare queer drama from Romania and is only the second queer movie to come out of that county after Beyond the Hills (2013). Being gay in Romania in 2021 is not an easy matter and this film manages to tackle an explosive set of issues involving police, gays, and homophobes. The film portrays a day in the life of a fairly closeted cop at work. His workmate’s banter is unrelentingly homophobic; coming out is clearly not an option in this macho universe. Even his sister Catalina (Cedana Trifan) – the only member of his family we are introduced to – openly questions his life choices after barging in on him uninvited. The central character is Cristi (Conrad Mericoffer), a closeted policeman in the Bucharest police force who is in a long-term, long-distance relationships with a French-Algerian flight attendant named Hadi (Radouan Leflahi).

When Hadi comes to Bucharest for a weekend visit, Cristi is reluctant to agree to do any activity which involves going out in public with his boyfriend. Hadi was hoping for a romantic weekend in the mountains but Cristi avoids thinking about it, as Hadi will be flying off to Germany soon. A brief scene of Hadi doing the daily Muslim prayers of salat opens up the story to other queer contexts and worlds. The film begins as Hadi arrives to spend the weekend with Cristi, and the whole film takes place over the following twenty-four hours as Cristi’s public and private lives collide dramatically,

Leaving behind Hadi in the apartment, Cristi goes on duty. He is immediately sent on a call-out with his colleagues. Throughout a long scene of casual banter, gay men are the punchline of every joke. Cristi seems able to “pass” fairly easily as he recounts his latest breakup with his girlfriend and why she broke up with him. The other officers sympathize, suggesting he should really just choose someone and settle down.

When Cristi goes to work that night, his platoon is sent to a movie theater to sort out a disturbance.  There is a group of right-wing homophobes protesting the screening of a queer film. (This is actually based on a real live-event that actually did occur.) Whilst he is there with his platoon trying to deal with the situation, one of the queer audience members recognizes Cristi as someone who he had hooked up for sex before.  When the man confronts the embarrassed policeman, the air is rife with tension as Cristi will do absolutely anything to stop being “outed.”

His fear and confusion are mirrored cinematographically: as he wanders through the crowd, the camera follows him with dizzying movements. The cops quickly form a barrier between the groups, immediately brushing off their previous banter and assuming their professional roles. The police intervention remains stoically even-handed, a reaction that is met with loud protests from both sides. The man from the audience who has recognized Cristi is incensed that the police are not expelling the protestors, and in a dramatic escalation of tensions, threatens to out Cristi in front of his colleagues. The latter, feeling entrapped, starts hitting him, and eventually leaves him bleeding on the floor of the exit.

The film gradually reveals Cristi’s own internalized homophobia. The crude language he uses to describe the guy he beat up only reinforces this. Master of his own entrapment, he turns the rage he feels on himself. He also confounds sexual exhibitionism with sexual identity – a mainstay of homophobic preaching. He tells his fellow police officers a series of escalating lies which mirror the panic that he himself is feeling. First that “he was coming on to me,” then finally that he saw him “masturbating in the supply closet.” The other officers seem to accept this strange version of how things unfolded without question. The shouting of the protestors in the cinema hall mirrors this confusion: As one woman puts it, “I’m sick of you all rubbing it in our faces.”

But beyond mob mentality, there is a more subtle version of events. Cristi is told to stay out of sight, hidden away from the crowd in the empty cinema hall. Members of the police force come in to speak to him for various reasons, and their individual reactions vary greatly. This creates an interesting contrast with the mob scene outside, where no two members of the opposing sides will listen to each other. In the “theater” – indeed, this part of the film has a very theatrical quality to it, reflecting Jebeleanu’s theater background, the police officers Cristi talks to each reveal a bit of themselves, one saying that he would have beaten the guy up even worse, others accusing Cristi of being gay. Finally, another one Mircea (Alexandru Potocean), a fellow policeman and his friend tells Cristi a long, meandering story about a lost dog that he had found tied to a tree. Despite its piquant irrelevance, it shows that his friend is trying his best in a violent world. The film ends with Cristi, alone again, wandering through the empty streets and trying to come to terms with what happened.

This part of the film is reminiscent of the work of fellow Romanian directors Cristi Puiu and Radu Muntean. The muted self-expression of a main character struggling within the confines of a role that society has set for him, all against a simplified background that leaves the viewer feeling trapped and claustrophobic, are recognizable traits of this slightly older generation of Romanian filmmakers. This film is a dramatic illustration of how the worst forms of homophobia are often intertwined with (and partly caused by) deeply rooted fear. Although the camera is mostly focused on Cristi and his solitude, the link back to the protestors and their own solitude is clearly drawn. His frantic actions and his fear are mirrored in the angry and fearful actions taken by those who came all the way to the cinema just to prevent people from watching a film.

Poppy Field won the main prize at the Molodist Kyiv International Film Festival’s Sunny Bunny Competition. The program has been around since 2001, meaning that Ukraine has one of the oldest LGBTQ+ film programs in the world. Which isn’t to say that homosexuality is readily accepted in Ukraine. Several screenings of queer films have been interrupted by angry protesters over the past decade. When the notorious social experiment from Russia, in which a gay couple walked through the center of Moscow holding hands, was repeated in the center of the Ukrainian capital in 2015, it ended with the couple being kicked and pepper-sprayed by a group of young Neo-Nazis. In Romania too, screenings have been disrupted in the past few years. Several of these incidents happened during a single week in 2018, including one before a screening of the French film about the AIDS epidemic 120 battements par minute. The scriptwriter of Poppy Field, Ioana Moraru, was inspired by such events to write this film about the disruption of a screening and its aftermath.