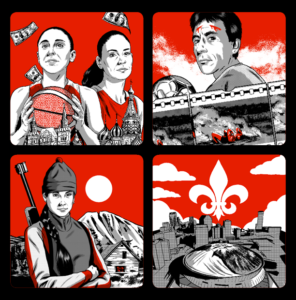 ESPN Films’ 30 for 30 Podcasts will return for a sixth season with four all-new audio documentaries. The first episode will debut on Tuesday, November 12, with the others premiering every Tuesday through December 3. The audio documentaries will tell a range of fascinating stories about kidnappings, scandal, and devastating natural disasters — while touching on themes of hope, community, and recovery — and span the globe from Moscow to Montana, Chile to New Orleans. Listen to the trailer at 30for30podcasts.com.

The season kicks off with a story about two of the most famous women in sports, Diana Taurasi and Sue Bird, who talk openly about their stranger-than-fiction experience with Shabtai Kalmanovich, former owner of their Russian basketball team and possible double agent. Additionally, ESPN’s Bonnie Ford lends her reporting skills and signature voice to the 30 for 30 Podcasts series in the episode titled “Out of the Woods.” Listen to the trailer and previous seasons now at 30for30podcasts.com, on the ESPN App, Apple Podcasts, iHeartRadio, Spotify, TuneIn and wherever podcasts are available.

The previous season of 30 for 30 Podcasts, “The Sterling Affairs,” reported on and hosted by ESPN Senior Writer Ramona Shelburne, saw huge success. The five-part series that examined the history and scandal surrounding former NBA owner Donald Sterling has been downloaded approximately two and a half million times.

For Diana Taurasi and Sue Bird, life in the WNBA paled in comparison to the lavish treatment they received in Russian professional basketball, courtesy of their team owner and benefactor, Shabtai Kalmanovich. Kalmanovich spoiled his stars, showering them with expensive gifts, luxury hotels, and private concerts, but he was a man with a complicated past. Taurasi and Bird had long heard stories about his history as a KGB spy and links to organized crime, but Kalmanovich’s murder in 2009 forced them to reckon with the complicated legacy of the man they had come to love.

In the 1980s, soccer and nationalism were closely linked throughout South America, and in Chile in particular, anything that could give the team an edge was condoned. The feeling was that the team needed to be “mas bandidos que los bandidos” (“more bandits than the bandits”) to win their matches. During qualifying for the 1990 World Cup, Chile’s national team, led by its captain and star goalie Roberto “El Condor” Rojas, was taken by a kind of “madness” that it could beat powerhouse Brazil. The matches between Chile and Brazil were full of fights, brutal play, and out of control fans. In the culminating moment, Rojas was seemingly hit and injured by a flare shot by a Brazilian fan. It was only after photographs of the incident were released did the truth come out — but by that point El Condor and his teammates had already pushed their madness over the brink.

Kari Swenson was on an afternoon trail run in the mountains near Big Sky, Montana in July 1984 when two men blocked her path and forever altered the trajectory of her life. Her rigorous training in the sport of biathlon – a hybrid of cross-country skiing and target shooting – helped her survive the next 18 hours, as she was kidnapped, shot through the chest and left bleeding in the forest near the body of a volunteer rescuer who they killed. The aftermath tested Kari in a different way. She made a comeback to competition while wrestling with post-traumatic stress and massive media coverage that often romanticized her captors. Thirty-five years later, Kari grants a rare interview to take charge of her own story of resilience and recovery, and offers a glimpse of what has sustained her over the long haul.

According to local legend, the Superdome was always a haunted place, built atop the abandoned Girod Street Cemetery, and from its beginning in 1975 there was trouble. First plagued by construction problems, then years of bad luck for the host Saints team –– by 2005 those Saints were prepared to abandon the stadium in favor of a dreaded move to San Antonio. Then Hurricane Katrina hit, and the iconic stadium became the scene for real and invented horror stories for the displaced New Orleanians who sheltered there. In a surprising turn, a decision to save the stadium turned it into a potent symbol of the rebirth of the city, a rebirth buoyed by a suddenly very good Saints team that would go on to win the Superbowl just a few years after their return to New Orleans in 2006.

30 for 30 Podcasts, from ESPN Films and ESPN Audio, are original audio documentaries from the makers of the acclaimed 30 for 30 film series. Telling sports stories like you’ve never heard before, through a combination of original reporting and archival sound, 30 for 30 Podcasts goes beyond the field to explore how sports, competition, athleticism and adventure affect our lives and our world. The series has been recognized by the NYF International Radio Awards, the Webby Awards, and the RTDNA Kaleidoscope Awards; as well as inclusion on numerous “best-of” lists from press outlets such as The Atlantic, Vulture, TIME and Entertainment Weekly. Episodes have been featured on NPR, 99% Invisible, Slate Podcasts and more. For more visit 30for30podcats.com.

Rosie Flores & The Talismen Get Inspiration from The Everly Brothers