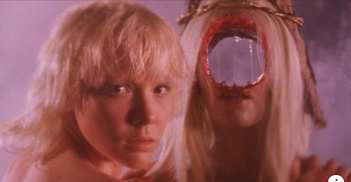 After Blue takes place sometime in the future when Earth has been abandoned and humanity has settled on After Blue. a planet that seems to be exclusively hospitable to women. When the notorious criminal Kate Bush is freed by Roxy, the teen daughter of the colony’s hairdresser Zora, the duo are exiled to the wilds in order to track down the criminal. Armed only with Gucci rifles and Paul Smith pistols, the mother-and-daughter will encounter alien sights they could never have dreamt of in their wildest fantasies. Here is the trailer: NSFW: AFTER BLUE (DIRTY PARADISE) | 2021 | Exclusive Teaser Trailer (with English Subtitles) HD  There is a fine review of After Blue on IndieWire by Jude Dry at: https://www.indiewire.com/2021/10/after-blue-review-lesbian-scifi-1234669878/?fbclid=IwAR3pVkS-BmITWnKsaU4mfHcc8HdnQxSpaVbzSdihBDiWxJqrmaVZm3yHyaE

A popular annual film festival in Los Angeles for many years, BeyondFest is put on in conjunction with the American Cinematheque. Since the American Cinematheque is no longer at the Egyptian Theatre, its primary location is the Los Feliz Theatres in Hollywood; the American Cinematheque still uses the MUBI Aero Theatre in West Los Angeles and also the Hollywood Legion Theater. This year’s line-up has already included Julia Ducournau’s Titane, with a Q&A with the director on September 29 and Vladimir Johannsson’s Lamb, with a Q&A with the director and lead actor Noomi Rapache on September 30. There are a number of West Coast premieres of new genre films included in this ongoing BeyondFest film festival. You should check out all the films being screened at this year’s 2021 BeyondFest.