AT THE 24 HOUR MUSICALS 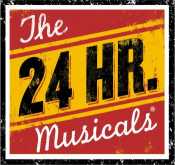 June 18, 2019 (New York, NY) — Favorites of stage and screen took to the Irene Diamond Stage at the Pershing Square Signature Center last night to help The 24 Hour Plays mark its 24th anniversary with an intimate production of The 24 Hour Musicals. Erich Bergen, Jessica Hecht, Alex Moffat, Bonnie Milligan and Anthony Rapp were just a few of the exceptional group of artists who joined forces to write, compose, direct and perform four original musicals within 24 hours.

The marathon process for The 24 Hour Musicals began at 9 PM the night before the performance. Writers, composers, directors, choreographers, actors, music directors, musicians and production staff—many of whom have never worked with or met each other before—gather for an orientation where they are asked to share one costume piece, one prop, a special skill, and to reveal something that they have always wanted to do on stage, as well as some singing and dancing. At 11 PM, the composers and writers get to work crafting 15-20 minute musicals overnight; at 9AM the next morning, the actors receive their roles and the directors, choreographers and musicians arrive to begin rehearsal. Less than 12 hours later, they must be ready to perform in front of a live audience.

The first musical of the evening was TREADING WATER, which follows three 16-year old lifeguards (Joel Marsh Garland, Anthony Rapp and Alex Moffat) ready for the best summer of their lives – until they meet their new no-nonsense boss, played by Montego Glover. The new head honcho is ready to make the lifeguards work harder than ever before, and reveal some deep secrets along the way.  TREADING WATER was written by Lily Houghton, with music and lyrics by Lauren Pritchard and directed by Sammi Cannold with music direction by Jane Cardona and choreography by Brad Landers.

Amber (Solea Pfeiffer) joined 126 extracurriculars and Cici (Sarah Steele) supported 47 humanitarian causes to gain admission to Magnus University – but somehow, they were WAITLISTED? The two friends decide that the only way to get off the waitlist for “the greatest university in the realm” is to eliminate the competition (Evan Hall, Kim Director and Clifton Duncan) one by one, using unconventional but deadly methods. WAITLISTED? was written by Dave Harris, with music and lyrics by Toshi Reagon and directed by Taylor Reynolds with music direction by Lena Gabrielle and choreography by Jenn Rapp.

Next up was IT’S LIKE, HELLO, set in a Hollywood meeting room where Aya (Aya Cash) is pitching producer Jessica (Jessica Hecht) and star Bonnie (Bonnie Milligan) a film about Eleanor of Aquitaine. Everyone’s ideas for the direction of the film are so vastly different that the ghost of Eleanor herself (Tamara Tunie) must step in to decide how the story should be told. IT’S LIKE, HELLO was written by Kristoffer Diaz, with music and lyrics by Mike Doughty and directed by Shira Milikowsky with music direction by Udi Gershuni and choreography by Brad Landers.

The final musical, A SONG OF LOVE, tells the story of Noah (Noah Galvin), who hopes to lose his virginity before he moves to New York City. With the help of his best friend, Dee (Dee Roscioli), Noah meets Erich (Erich Bergen) and steals him away from his heartbroken girlfriend (Isabelle Fuhrman), but eventually breaks things off. When he tries to win Erich back solely so he doesn’t have to move to New York a virgin, Dee uses the opportunity to point Noah in another direction and teach him how to be vulnerable with someone new (Micah Stock). A SONG OF LOVE was written by Christopher Oscar Peña, with music and lyrics by Nellie McKay and directed by Oliver Butler with music direction by Matt Aument and choreography by Jenn Rapp.

Throughout the evening, a dynamic six-piece band led by The 24 Hour Musicals longtime music supervisor Zac Zinger carried off each musical with precision and panache.

ABOUT THE 24 HOUR PLAYS®