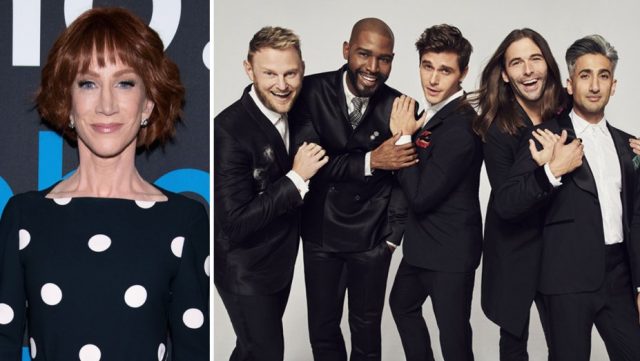 Los Angeles, CA (The Hollywood Times) 10/3/18 – When Lance Bass introduced Kathy Griffin to her Equality Awards crowd Saturday night, he may already have been prepared for her next move: brandishing the Griffin middle-finger, which, flown properly, looks astonishingly like an American flag.  The unapologetic comedian, activist, and advocate brought them to their feet.  She is, truly, a platinum-status survivor.

“We are now the majority,” she said.  “And what’s so ironic is that ‘the others’ is the makeup of America.  And I couldn’t be prouder to be in a diverse America.”

Griffin has spoken openly about the Trump administration’s attempt to “break” her following her controversial photo shoot last year with Tyler Shields.  She rose, spectacularly, and now not only stands as an icon for LGBTQ rights, but also an icon of strength and renewal.  She is Hollywood’s phoenix rising. “The LGBT Community stuck with me through thick and thin,” she said.

Her acceptance of the Ally Leadership Award sealed that status and cemented a new era for both Griffin and LGBTQ equality.  Her activism has been expansive and impressive.  It includes her campaign against Prop 8 (The Marriage Protection Act); raising nearly $5 million for queer civil rights organizations and HIV/AIDS prevention; and helping work to repeal the “Don’t Ask, Don’t Tell” military policy.  She’s become an undisputed hero of the movement, and in a room where “Trump” is a dirty word, she’s nearly a god.

Another powerhouse in the LGBTQ community, Queer Eye, was honored with The Equality Visibility Award, accepted by Karamo Brown.  Brown noted that a political discussion is not something that should divide, but “bring us together.”

Businesswoman, activist, healer, and subject of the documentary Jewel’s Catch One, Jewel Thais Williams was honored with The Community Leadership Award.  “It’s imperative for all of us to keep our gayness, our greatness and our creativity alive,” she said.

The supervillain of the night was, without a doubt, Brett Kavanaugh—nearly everyone who took the stage took a shot at the aspiring Supreme Court Justice.  Just two days past his testimony over the allegations that he sexually assaulted Christine Blasey Ford, he made the perfect target for a largely liberal audience.

The hilarious Dana Goldberg hosted, Thelma Houston performed “Don’t Leave Me This Way,” and Brandon Stensell performed, all before guests were ushered into the lobby for a late-night after-party.

It was a vibrant celebration of the fact that Equality California continues to blaze trails—those who attended were simply witnessing history in the making.