Advertisement
Home #Hwoodtimes EPIX Premiered Carnival Films’ BELGRAVIA last night
Facebook
Twitter
Pinterest
ReddIt
Email
By Valerie Milano
Pasadena, CA (The Hollywood Times) 4/12/20 – Julian Fellowes’ 2017 novel BELGRAVIA (Orion Publishing) is set amongst the upper echelon of London society in the 19th century.  The now legendary ball hosted by the Duchess of Richmond for the Duke of Wellington in Brussels on the eve of the fateful Battle of Waterloo sets in motion a series of events that will have consequences for decades to come. 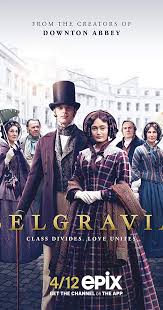 Secrets of all kinds unravel behind the great doors of London’s grandest neighborhood–Belgravia.  When the future is at stake, the past can change everything!
The Battle of Waterloo was fought on Sunday, June 18th, 1815 near Waterloo in Belgium.  Waterloo was part of the United Kingdom of the Netherlands at the time.
Napoleon Bonaparte and his troops were famously defeated by armies uniting forces from the United Kingdom, the Netherlands, the German Legion, Hanover, Brunswick, and Nassau under the command of the Duke of Wellington.
The Napoleonic Wars and Napoleon’s rule as Emperor of the French ended after he “met his Waterloo”, signaling the beginning of the new era depicted in BELGRAVIA.  Napoleon’s dramatic defeat represented a milestone between several serial European wars and decades of relative peace sometimes referred to as the Pax Britannica.

Belgravia takes its name from one of the Duke of Westminster’s subsidiary titles, Viscount Belgrave, which is in turn derived from Belgrave, Cheshire, a village on land belonging to the Duke.  The region remains an affluent district of Central London to the present day.

Julian Fellowes has adapted BELGRAVIA for an all-new series which Epix will launch on Sunday, April 12th, 2020 at 9 p.m.  The production reunites the award-winning creative team behind DOWNTON ABBEY.  Julian Fellowes, Liz Trubridge, Gareth Neame, and Nigel Marchant are the executive producers and Colin Wratten is the producer.  John Alexander directs all episodes.
As BELGRAVIA opens, James and Anne Trenchard (Philip Glenister and Tamsin Greig) notice that their beautiful daughter Sophia (Emily Reid) has caught the eye of Lord Edmund Bellasis (Jeremy Neumark Jones), the son and heir of one of Britain’s most prominent families. 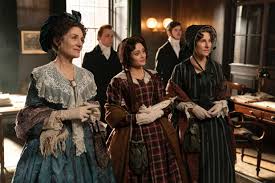 The Trenchards have made their money in trade, sowing the seeds for many delicious class struggles and family scandals.  Veteran British actors Harriet Walter and Tom Wilkinson portray Lord Edmund’s august parents, Lady Brockenhurst and the Earl of Brockenhurst.
The burning question for many DOWNTON ABBEY fans will be how BELGRAVIA stacks up.  “There’s bound to be similarities, because they’re written by the same guy!” quipped Julian Fellowes when he spoke on a Winter 2020 TCA Press Tour taking place on Saturday, January 18th at the Langham Huntington Hotel in Pasadena.  Fellowes was joined by executive producer Gareth Neames and cast members Tamsin Greig, Philip Glenister, Alice Eve, and Ella Purnell.

The superb writing, stellar cast, and stunning period costumes and settings should in themselves be enough for BELGRAVIA to find its own devoted audience.  BELGRAVIA is a Carnival Films co-production with EPIX for ITV and is distributed by NBCUniversal International Distribution.  The series has been commissioned for ITV by Head of Drama, Polly Hill.