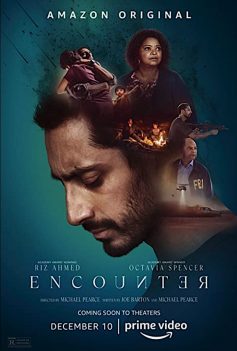 Los Angeles, CA (The Hollywood Times) 12/7/21 – Just opening on December 3 at selected theatres in Los Angeles is a quasi-science fiction film Encounter (2021), starring Riz Ahmed as a beleaguered father who embarks on a journey with his two sons in an effort to protect them from a perceived alien threat. Riz Ahmed is on a hot streak, earning an Oscar nomination for Sound of Metal (2019) and raves for his work in Mogul Mowgli (2020). To say that Michael Pearce’s Encounter is an unfortunate blip along the way is probably true. However, Ahmed is the best thing in this frustrating film about mental illness and children in peril. In fact, there are times when Ahmed feels like he’s in an entirely different film than the rest of the cast or even the one that Pearce sometimes feels like he’s trying to make. To say he elevates a mediocre script would be a massive understatement, and his work alone almost makes this worth seeing, but only to imagine the better movie that could have contained it. Encounter will be available for screening online December 10 on Amazon Video.

Ahmed plays Malik Khan, a decorated marine with clear mental illness. His condition doesn’t seem that dissimilar to the protagonist of William Friedkin’s Bug (2006) in that he’s convinced little, evil parasites are everywhere – in the walls, in the air, in the eyes of his enemy. Clearly unhinged, Khan goes to the home of his estranged wife (Janina Gavakar) and kidnaps his two children Jay (Lucian-River Chauhan) and Bobby (Aditya Geddada), taking them on the road in an attempt to save them from a nonexistent threat. Malik Khan (Riz Ahmed) believes that he has uncovered top-secret information that an alien threat has invaded Earth, with non-terrestrial microorganisms infecting up to half of the human population. With the US government covering up the threat, Malik takes it upon himself to rescue his two sons Jay and Bobby from his ex-wife Piya (Janina Gavankar) who he believes is already and potentially contagious. His journey leads him across a dusty landscape, and the tension comes from being entirely uncertain of where he’s going or what he’s going to do when he gets there.

Around halfway through, Pearce completely derails this tension by introducing Malik’s parole officer Hattie (Octavia Spencer), who works with the authorities to save Malik’s sons from their father. A G-man played by Rory Cochrane is convinced that Malik is what’s called a “family annihilator,” which is the term for someone who kills their children and themselves. After all, he didn’t pack any clothes or supplies. Hattie is convinced that Malik honestly thinks he’s trying to protect his kids and wouldn’t hurt them. This half of the film is stubbornly generic, playing off child-in-peril clichés and hackneyed dialogue. It’s like Ahmed is doing a character study on mental illness and PTSD while Spencer is doing an original Netflix thriller that gets no advance press and manipulates the audience by presenting children in peril. Only one of these is worth seeing.

Tonally the film does feel mismatched, as Encounter evolves more into a heartwarming and eventually complex study of the relationship between a father and his sons. The best part of the film is watching Riz Ahmed’s range as an actor, as he sympathetically peels back the layers of Malik, ranging from the heroic father figure at the start, to a tortured soul haunted by his demons in the emotional and heart-wrenching finale. Octavia Spencer also shows up in a minor supporting role as Hattie, a mediator between the veteran and the authorities, linked to Malik’s tragic past. Unfortunately, the ever-talented Spencer is terribly underused.

Especially of note is the conclusion, shot on wide-open desert plains of Nevada and an eerily empty mining community (familiar to viewers of Nomadland), all of which amplifies the apocalyptic struggle occurring inside a man’s mind. But it’s difficult to ignore the film’s troublingly naïve take on Malik’s mental trauma, which is presented as both serious enough to endanger even the people he loves but also relatively simple to resolve. The film also stumbles with a climax involving a hostage negotiation, a trope so tired at this point that it might have been better to just let Malik finish out the story by actually fighting some aliens.