Pasadena, CA (The Hollywood Times) 5/3/19 – If you grew up in the 80’s, the inescapable influences of Gloria and Emilio Estefan are simply inescapable. Now, for the first time in history, a couple–a hispanic couple, no less–are being honored for their indelible cultural contributions to the landscape of American music, with the Library of Congress Gershwin Prize.  The PBS special will air on PBS Friday, May 3rd, at 9 PM ET. It’s a chance to revisit this astoundingly accomplished duo of musicians. And maybe even do a little dancing.

Estefan and  sat down with Tim Swift, the producer of the program, to discuss the prize, the television special, and their unique musical history in front of an audience for a panel discussion. The original event took place and was taped in Washington, D.C. in March. 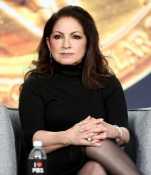 In spite of their largely parallel career paths, it turns out the two aren’t altogether identical; although their similarities have made them strong.  “I’m very different from Emilio, personality wise,” said Estefan. “But when it comes to  priorities and values, and the things that come first, we are very much on the same page. I think I sang since I talked. My mom actually won a contest in Cuba when she was a child to come to Hollywood and dub the movies.”

Estefan is anything but a typical stage siren. Having come from a highly educated home–her mother had a PhD in education–she chose to study psychology, French, and communications at the University of Miami. She graduated in three years. “Music was always my catharsis, but I didn’t plan on doing it as, you know, a business,” she said.  “We needed to feed our family and make sure we had jobs.”

Still, she had a grandmother who encouraged her to utilize her musical gifts. And she did. She met , and the two began performing together. “It was a very natural process,” she said of their rise to stardom.

For Emilio, it was something like love at first sight. “I saw her, and I loved her voice,” he said. “We’ve been married 40 years. So, you know it was a great thing.” The two have transcended marriage, and are now widely accepted as an institution.  The infectious performances in March are a testament to that fact. They still sound as fresh as they did decades ago.

Emilio joked that the secret to their success as a couple was to simply be a “yes” man.  “But I think it’s love,” he said, with much more gravity. “Love and respect. Something we was taught since immigrants, you know, came with a lot of dreams, no money, and we was fighting for our dreams, and we achieved so many incredible things that, you know, makes us proud.”

The award of national prominence, it turns out, is just icing on the cake for these two veterans of music, and love. And it represents a much greater hope, and an American ideal.

“Getting this award is incredible,” said . “I wish my mom and my dad could be alive to be there with me that day, because we at least can bring so much hope for minorities not only for Latinos for minorities.”

The PBS special includes celebrity performances by powerhouses including Cyndi Lauper, Patti LaBelle, Andy Garcia, Rita Moreno, and the cast of On Your Feet. Aside from being a great trip down memory lane, it’s also a moving tribute to monumentally influential singers. Latin music in America truly would not be the same without them.

To learn more about the program, or hear the interview, check your local listings, and visit: