Los Angeles, CA (The Hollywood Times) 6/27/22 – Emergency is one of the newest comedy-dramas streaming on Netflix. The shorter version of the film debuted in 2018 and won multiple awards at Sundance and South By Southwest. It has been expanded into a feature film, following the lives of two college seniors Kunle (Donald Elise Watkins) and his best friend Sean (RJ Cyler). The two plan to embark on an epic night of spring break parties, which they call “Legendary Tour.” Returning to their apartment to pregame, they find their front door open and, upon entering, discover a semi-conscious white female lying on the floor. Their roommate Carlos (Sebastian Chacon) is oblivious to the situation, and Kunle thinks it would be a good idea to call the police, but Sean opposes bringing up the fact that they are Black and Latino with a white woman passed out in their home. They decided it would be in their best interest to drop her off somewhere safe, but things get chaotic when Emma’s drunk sister and friends begin their search by tracking Emma’s phone location.

The commentary in this film is centered around showing the audience specific racial dynamics and how they affect POC’s decision-making, especially concerning Law Enforcement. In addition, it’s social satirical approach is sure to keep viewers interested.

The film was written by K.D. Davila and directed by Carey Williams. Click on the link below to watch the trailer. 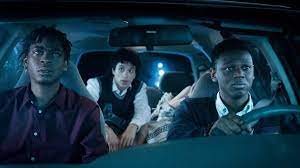