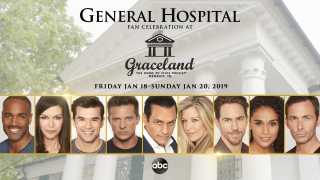 For the first time ever, Elvis Presley’s Graceland will host a special “General Hospital”-themed fan celebration. The event, which kicks off Friday, Jan. 18, will include numerous exclusive events held in various locations throughout the Graceland Campus; including Elvis Presley’s Memphis entertainment and exhibit complex, and the AAA-rated Four Diamond luxury resort, The Guest House at Graceland.

Fans can now log on to Graceland.com/GeneralHospital and purchase tickets for a rare opportunity to attend intimate “General Hospital”-themed parties, such as “The Live Nurses Ball” and the “Metro Court Hotel Lounge Party, ” as well as catch screenings of classic episodes, blooper reels and never-before-seen content.

“I’m excited to meet with the fans and have them spend the weekend with the extremely talented cast of ‘General Hospital.’ It’s a once-in-a-lifetime opportunity in a historic location,” shared Frank Valentini, executive producer, “General Hospital.”

In addition to all the “General Hospital”-themed events, attendees will have the opportunity to tour Graceland. Fans will be invited to visit the iconic mansion that Elvis called home; Elvis Presley’s Memphis – a 200,000 square foot entertainment complex filled with museum exhibits, shops and restaurants; and Elvis’ custom jets. Guests in attendance will also have the option to purchase exclusive “General Hospital” merchandise only available to attendees.

Elvis Presley’s Graceland, in Memphis, is music’s most important and beloved landmark, with hundreds of thousands of fans from around the world visiting the historic home each year. Elvis Presley Enterprises, Inc. (EPE) manages the operations of Graceland and its related properties, including Elvis Presley’s Memphis, Graceland’s new entertainment and exhibition complex over 200,000 square feet in size; the AAA Four-Diamond Guest House at Graceland 450-room resort hotel; and the Graceland Archives, featuring thousands of artifacts from Elvis’ home and career. EPE also produces and licenses Elvis-themed live events, tours, and attractions worldwide. Graceland Holdings LLC, led by managing partner Joel Weinshanker, is the majority owner of EPE. Graceland is the only attraction worldwide to ever receive four USA Today 10Best Readers’ Choice Awards: in 2018, it was voted Best Tennessee Attraction, in 2015 voted the world’s Best Musical Attraction and Best Historic Southern Attraction, and in 2013 voted the No. 1 Iconic American Attraction. In 2018, TripAdvisor Travelers’ Choice Awards named Graceland one of the top 25 landmarks in the world. For more information on EPE and Graceland, visit www.graceland.com.

*COPYRIGHT ©2018 American Broadcasting Companies, Inc. All photography is copyrighted material and is for editorial use only. Images are not to be archived, altered, duplicated, resold, retransmitted or used for any other purposes without written permission of ABC. Images are distributed to the press in order to publicize current programming. Any other usage must be licensed. Photos posted for Web use must be at the low resolution of 72dpi, no larger than 2×3 in size.