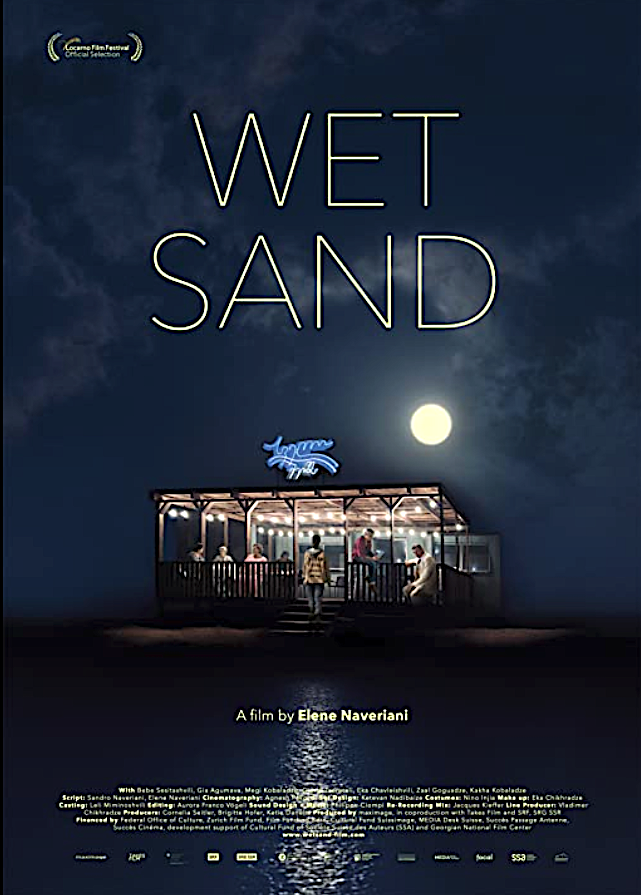 Los Angeles, CA (The Hollywood Times) 3/22/22 – One of the films gracing the Locarno in L.A. Film Festival this past weekend is Elene Naveriani’s Wet Sand (Republic of Georgia, 2021), a poignant fiction film that is a melancholy hymn to sexual identity in a country with a heavily homophobic culture. A village on the Black Sea in Georgia, populated by seemingly cordial and united people who enjoy a tranquil existence beyond the chaos of the city, is the setting for Naveriani’s second feature. But one day, Eliko, “the strange one,” a man who always cherished his private life, is found hanged. His granddaughter Moe (played majestically by Bebe Sesitashvili), a mysterious and determined girl who has made a life for herself in the city of Tbilisi, returns to the seaside village to organize his funeral. The Locarno in L.A. Film Festival is a curated selection of films from the August 2021 Locarno Film Festival in Switzerland; here hosted by Acropolis Cinema and MUBI at the 2020 Arts & Archive Cultural Center on Beverly Boulevard in Los Angeles.

Although aware of the decidedly non-progressive air hovering over the community, Moe is nonetheless surprised to find herself faced with a complicated web of lies and betrayals, characterized by the brutal intolerance and cruel rejection of a kind of “difference” which is considered an unacceptable defect to be shaken off at all costs. Eliko (the man found hanged in his house) was forced to base his life around a lie, a secret which burned inside him. His secret lover, with whom he shared the past twenty-two years of his life, is called Amnon (a moving Gia Agumava) and he is the owner of the only bar in the area and it’s named “Wet Sand.” The bar is also the workplace of Fleshka, the other “strange person” in the village (a soul stirring Megi Kobaladze).

Though Eliko has settled in the village a few decades before, he is viewed as an outsider. In fact, they grumble about taking care of his funeral. Fleshka and Amnon are also misfits in the village, particularly Fleshka who wants to leave the village and is often seen wearing a jacket that states, “Follow your fucking dreams.” When the villagers quarrel about how to bury Eliko, it is Amnon who steps up to take care of the funeral arrangements. Eliko has a daughter and a granddaughter, but they haven’t visited him for decades. Amnon, however, contacts Eliko’s granddaughter Moe (Bebe Sesitashvili) and she arrives from the Capital city Tbilisi. Lean, tall with a crew cut hairstyle, Moe warms up to Fleshka, Amnon and also gets acquainted with a benevolent old fisherman named Spero (Kakha Kobaladze). Of course, it is the arrival of Eliko’s granddaughter Moe that sets in motion the actions that will reveal truth about the village’s dislike for Eliko.

In one nuanced emotional moment, Moe understands the nature of the relationship that existed between Amnon and Eliko for more than two decades. Writers Elene and Sandro Naeveriani occasionally use newsreels to emphasize the rampant sociopolitical and environmental issues plaguing the small nation of Georgia that lies on the coast of the Black Sea. Fleshka bafflingly looks at the news of the moderate celebration of Family Day due to the ongoing COVID Pandemic. Family Day in Georgia was a creation of ultra-nationalist groups and the Orthodox Church to oppose The International Day against Homophobia and Transphobia (on May 17th). In fact, press reports from the country indicate severe oppression of the rights of the LGBT community for the past decade.

Moe is confronted with a web of lies and the tragic consequences of Eliko’s hidden love life with Amnon, which lasted 22 years. The truth however frees Moe’s capability to love and forces the villagers to take a stand. Director Elene Naveriani treats the small world in her narrative as a microcosm of the Georgian national reality. Amnon and Eliko had to share their love for each other, hiding from the prying eyes of the locals. Gradually, we also get to know the painful truths behind Eliko’s estrangement from his daughter and his eventual suicide. Nevertheless, there’s hope for Fleshka and Moe who has learned to express their desires, to assert their identity, and most importantly to tackle the bigotries and discrimination.

Wet Sand teaches us that the truth comes at a high cost; a price which must be paid if we want to free ourselves from the shackles of a suffocating conformism which silences identities falling outside of the norm. Because of the repressive nature of life in this seaside village, there is no tolerance for any inkling of same-sex relationships. As the story unfolds, we come to understand the death of Eliko is directly linked to the life of Amnon, the owner of the “Wet Sand” bar. Eliko is an old man and supposedly dying of cancer, so it is assumed that his death due to hanging was an attempt to escape the pain of the cancer. But we soon learn the situation is much more complicated than that. Amnon knows much more about Eliko that he lets on. Thanks to the sacrifice made by Eliko and Amnon, Moe learns to really love: unconditionally, and perhaps for the very first time.

Accompanied by a great soundtrack, featuring a cameo by experimental, dark rock band Swans (“Our Love Lies”), Wet Sand is “a tribute to the forgotten ones, a fight against bigotry, an act of empowerment for the new generations who are wrestling with identity-related issues; to provide them with a story through which they can imagine their lives in the future”, explains the director. What’s especially moving is the force with which Elene Naveriani makes a personal story universal, a private revolution which resonates with each of us, reminding us of the extent to which feelings -– real ones, burning with truth – can become powerful weapons to wield against a conformism which thinks it can despotically dictate the rules.

The film’s elegant and poetic photography by Agnesh Pakozdi seems to transpose the inner world of its heroes and heroines into images. The stirring shots of seaside scenery aren’t simply treated as a backdrop. The camera often positioned at a distance from the characters shows their existence in relation to their immediate environment and social surroundings. Landscape asserts its presence prominently in some of the film, in a way similar to what we find in films of Andrey Tarkovsky, Terrence Malick, or Andrey Zvyagintsev.

Naveriani offers up a cathartic melodrama which never slides into emotional overload. Feelings are expressed sincerely and with measure; a measure which isn’t synonymous with censorship but with veracity and poetry. Along the lines of a Pedro Almodóvar film, both heartbreaking and brave, Naveriani’s second feature film pulls at our heartstrings, confronting us with a Georgian society (although sadly the film’s discourse could also be applied to other parts of the world) which scoffs at human rights, especially in relation to the LGBTIQ+ community. Wet Sand is a necessary film which lends a voice to “the forgotten ones”, to all those who have had to give up on living love with pride on account of a society which sees them as “monsters.” Through Naveriani’s brave and majestic approach, these monsters are transformed into giants, heroes who are fighting for a freedom which is already theirs by rights.