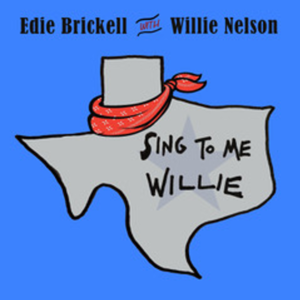 Renowned singer and songwriter Edie Brickell pays tribute to her friend, legendary musician and activist Willie Nelson, with new duet, “Sing To Me, Willie,” debuting today in celebration of Nelson’s 87th birthday. Listen/share HERE. All proceeds from the song will benefit MusiCares’ COVID-19 Relief Fund. In support of this initiative, Play MPE will be servicing the song free of charge.

Brickell, who was born and raised in Texas, opens the song with the line, “We played your music / At my daddy’s funeral / And the pastor was amused,” before sharing a sentiment familiar to generations of Willie Nelson fans—“Your voice reminds me of my home / Take me to Texas with a song.”

Of the idea behind “Sing To Me, Willie,” Brickell shares, “On Christmas Day, 2018, Willie asked me to write a song for us to sing together. What a gift! My father and Texas are my biggest connections to Willie. I never hear his voice without loving memories of people and places back home. If only my dad could have heard this song.”

The finished piece of music, released today, features a poetic duet between Brickell and Nelson, as they trade verses in the vivid style for which they are each uniquely known. “There are some places you recall forever / And some people you can’t forget,” they sing in harmony.

In addition to an award-winning musician, Brickell has also become known as a playwright since the debut of her Tony-nominated Broadway musical, Bright Star, which she co-wrote with Steve Martin. The celebrated pair has collaborated on several additional projects including their studio album, Love Has Come For You, whose title track won Best American Roots Song at the 2014 Grammy Awards.

Since her debut in 1988, Brickell has released twelve albums including her latest, Rocket, with Edie Brickell & New Bohemians in 2018—the band’s first new release in over a decade. Of the album, Associated Press declared, “a triumphant return for an artist who never really left…Brickell’s effervescent vocals never sounded better” while NPR’s “World Café” praised, “an explosively joyful album.” In addition to her work with New Bohemians, Brickell has also released music as a solo artist and as part of the groups The Gaddabouts and The Heavy Circles.