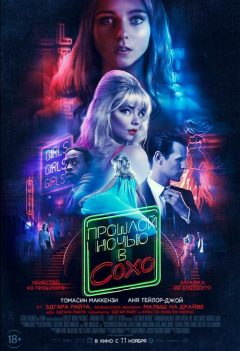 Los Angeles, CA (The Hollywood Times) 10/29/21 – Edgar Wright’s Last Night in Soho opens Friday, October 29 in theatres around town.  In the swinging 60s, Soho was the place to be with mod fashion and trendy pop music in London.  However, the glamour is not all it appears to be, and the dreams of the past start to crack and splinter into something far darker. Last Night in Soho is several movies at once: a stylish appreciation for life in the big city and a repudiation of its dark history, a cautionary coming-of-age tale, and an unsettling ghost story. Those layers reflect the director’s own evolving relationship to material, and its capacity to use slick, absorbing genre tropes to dig deep on London’s history of sexual assault in show business. Many of Wright’s previous films have focused on male slackers but finally he has a film with a female protagonist and two female leads. This evening’s screening of Last Night in Soho at the Harmony Gold Preview House was made possible by Film Independent and after the screening, there was a most informative Zoom Q&A conducted by Allison Anders with director Edgar Wright and co-writer Krysty Wilson-Cairms.

The movie follows fashion student Ellie (Thomasin McKenzie), who finds herself haunted by the plight of Sandie (Anya Taylor-Joy), a 1960s-era singer whose aspirations are derailed by abusive men who claim they can open doors for her only to shut them. Sandie’s tragic story enlightens Ellie to the stories of countless women in show business whose big dreams met a harsh reality, an experience that mirrors Wright’s own wakeup call several years ago.

“The bleak truth of it is that those stories were out there but they hadn’t been heard firsthand,” Wright said. “At worst they were malicious gossip in the way that a lot of stories about show biz aren’t the victims themselves telling their side of the story. I think the sadder thing is obviously some of those stories from the 60s will never be heard because some of those people are no longer with us.” Soho is the lively central London neighborhood better known for the birth of mod fashion than the sexism surrounding it, and many of the would-be talents whose lives were destroyed by an unseemly sex industry.

In Wright’s case, the seeds for Last Night in Soho were first planted over a decade ago, when someone gifted him the book Hammer Glamour: Classic Images from the Archive of Hammer Films. The book showcased lavish images of the horror studio’s central women, from Ingrid Pitt to Raquel Welch, along with biographical details. “I was really struck by the fact that a quarter of the bios ended in tragedy and careers cut short,” Wright said. “It was completely dissonant from this glossy kind of coffee table book.”

The script for Last Night in Soho grew out of Wright’s desire to work with Anja Taylor-Joy, who has starred in Robert Eggers’ The Witch. Wright eventually joined forces with screenwriter Krysty Wilson-Cairns, who had written the script for 1971.The pair met up in Soho, where Wilson-Cairns used to work as a barmaid at the Toucan Pub, which features prominently in the movie. Like Ellie, Wilson-Cairns lived adjacent to a strip club, Sunset Strip, and constantly witnessed the misogyny that lived alongside the flashiness of the neighborhood. Her own experiences merged with the countless others that Pardee had gathered for Wright earlier, as well as stories that Wright’s own mother shared about lecherous men from the time as well as her belief in ghosts.

Thomasin McKenzie was eventually cast as Eloise (or Ellie). In the film, her father left years ago, and her schizophrenic mother killed herself, but Ellie had a happy upbringing in rural Cornwall, where her grandmother (Rita Tushingham) taught her to adore the music and the style of London in the swinging Sixties. When she is admitted to a central London fashion school, it’s a dream come true. Not only can she design ’60s-inspired dresses, but she also can do it on the sacred ground once trod by Petula Clark, The Kinks, and her other 60s pop stars.

Soon Ellie learns that “London is a lot,” to quote one of the film’s catchphrases. The streets aren’t paved with gold; they’re paved with leeches and snobs, many of whom share Ellie’s student halls of residence. (As the condescending Jocasta, Synnove Karlsen gets the best, i.e., bitchiest, lines.) Ellie decides to move into an upstairs room in a creaky house owned by the stern Ms. Collins (Diana Rigg), mainly because it hasn’t been redecorated in decades. In fact, the room is so redolent of days gone by that whenever Ellie falls asleep, she seems to be in Sixties Soho.

Alas, “London is a lot,” to quote one of the film’s catchphrases. The streets aren’t paved with gold; they’re paved with leeches and snobs, many of whom share Ellie’s student halls of residence. (As the condescending Jocasta, Synnove Karlsen gets the best, i.e., bitchiest, lines.) Ellie decides to move into an upstairs room in a creaky house owned by the stern Ms. Collins (Diana Rigg), mainly because it hasn’t been redecorated in decades. In fact, the room is so redolent of days gone by that whenever Ellie falls asleep, she seems to be in Sixties Soho.

Wright and his team produce a marvelous re-creation of Soho – not as the groovy, brightly colored shopping destination, but as an overwhelming, neon-lit playground of thrillingly sleazy nightlife. One of its key locations is The Toucan, a pub just off Soho Square that most London-based film critics walk past (or into) several times a month. In the darkened alleys and bars of Soho, Ellie keeps seeing an old man who seems uncannily disturbing in his demeanor and his words – played by Terence Stamp.

When she is dreaming, Ellie has visions of the past, that of the swinging 60s. Ellie’s visions revolve around Sandie (Anya-Taylor Joy), a confident, Bardot-ish blonde who has come to London to make it as a singer, and who is spotted by a sharp-suited, wolfish entrepreneur (Smith). The time travel is handled with magical, dream-like fluidity: sometimes Ellie watches Sandie from across the room; sometimes she is Ellie’s reflection in the mirror; sometimes she takes Sandie’s place. Maybe it’s not time travel at all, but a symptom of schizophrenia. Ellie is not sure if she is really experiencing all these visions or not.

Whatever is going on, her trips provide an escape from present-day pressures along with an abundance of fashion ideas. However, she notices that being a beautiful young woman on the bottom rung of the showbiz ladder in the 1960s might not have been as glamorous as she imagined. It might even have been downright disturbing. Now that Ellie has been drawn into Sandie’s life, will she be able to get out? Go and see the movie and find out for yourself.