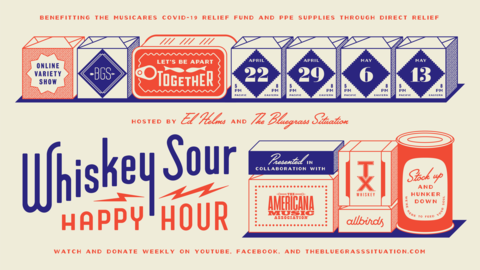 Ed Helms And The Bluegrass Situation Announce Whiskey Sour Happy Hour – A weekly variety show presented in part by TX Whiskey, Allbirds, and the Americana Music Association benefitting MusiCares’ COVID-19 Relief Fund and Direct Relief
April 15, 2020 – Los Angeles, CA – The Bluegrass Situation, along with its co-founder, actor/comedian/musician Ed Helms, have just announced Whiskey Sour Happy Hour, a 21st-century online variety show to benefit MusiCares’ COVID-19 Relief Fund and Direct Relief, debuting on April 22nd at 5 pm Pacific, 8 pm Eastern. With Helms serving as host of the series, Whiskey Sour Happy Hour will draw on his long-running Whiskey Sour Radio Hour shows at LA’s Largo to bring world-class music, comedy, and interviews directly into homes across the country and world. April 22nd’s edition of Whiskey Sour Happy Hour will feature music from Lee Ann Womack, Aubrie Sellers, Billy Strings, and Madison Cunningham—plus more surprise guests. Whiskey Sour Happy Hour can be streamed at thebluegrasssituation.com, YouTube, and Facebook. Watch Helms’ Whiskey Sour Happy Hour announcement here and visit DonorBox to start donating now!
After Whiskey Sour Happy Hour premieres on April 22nd, new shows will be broadcast every Wednesday for the following three weeks—April 29, May 6, and May 13. Confirmed guests for the series include Chris Thile, Yola, Sarah Jarosz, Rhiannon Giddens & Francesco Turrisi, Rodney Crowell, Aoife O’Donovan, Robert Ellis, and Watkins Family Hour, to name a few. Additional guests will be announced in the coming weeks.
“As soon as we realized the severity of the current crisis, Ed and I both knew we had to do something to support both our musical and medical community—and not just a one-time thing, but something that could promote more sustained giving through multiple shows,” says BGS Co-Founder and Executive Director, Amy Reitnouer Jacobs. “In a short amount of time, our BGS family of artists have come together in such a big way to make this happen. It makes us feel like even though we’re all separated right now, we’re closer than ever before.” Fans will be able to donate to MusiCares and Direct Relief via DonorBox during the live stream.
In addition to supporting Whiskey Sour Happy Hour, Ft. Worth’s craft whiskey brand TX Whiskey has already stepped up their efforts to combat the COVID-19 pandemic, shifting 100% of their production to making hand sanitizer. As of March 31st, the TX team has produced 800 gallons of hand sanitizer for government agencies. With more raw materials inbound, TX Whiskey is currently positioned to make and bottle 5000 more gallons of sanitizer. On top of that, TX Whiskey continues to support local musicians by giving them an online stage and revenue generator through their Straight From the Couch Sessions—streaming every Friday night in April on IGTV.
Also a presenting sponsor for Whiskey Sour Happy Hour, Allbirds  have been working hard to lift up the healthcare community responding to COVID-19, having already donated $500,000 dollars worth of shoes to healthcare workers nationwide. While supplies last, customers are able to bundle any shoe purchase with a donation to immediately supply a pair of Wool Runners to a healthcare professional who’s already reached out to Allbirds for support. Don’t need a new pair yourself, but still want to help? That’s an option, too. 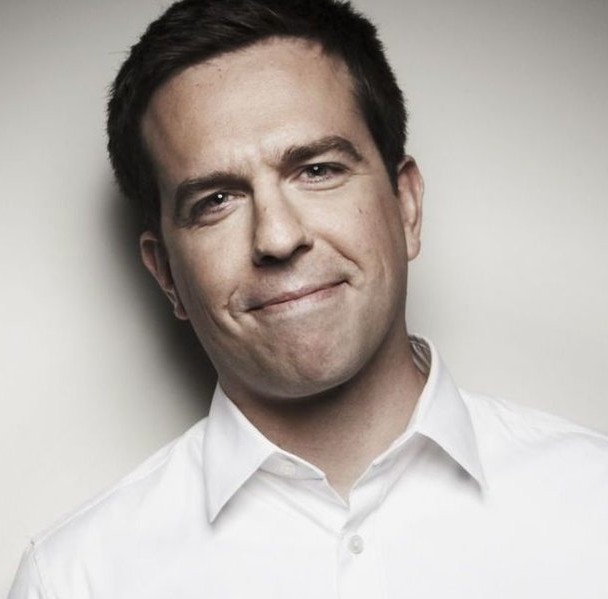 More About Ed Helms: Helms can currently be seen in Netflix’s comedy film Coffee & Kareem opposite Taraji P. Henson. Upcoming, he is set to write, co-executive produce, and star in Mike Schur’s Rutherford Falls for NBCU’s new streaming service, Peacock. He is also slated to host and executive produce NBCU’s hybrid television comedy True Story alongside Randall Park and has completed production on Nicole Beckwith’s comedy film, Togetherish. In 2012, Helms and Mike Falbo co-founded the production company Pacific Electric Picture Co., which currently has several TV projects in the works at various networks including Netflix, Fx, and Apple, and previously produced Helms’ Comedy Central special, “The Fake News with Ted Nelms,” which was honored with the Writers Guild of America Award for the Best Comedy/Variety Special. Among his diverse list of credits, Helms is best known for his tenure on NBC’s award-winning comedy series, The Office, and the box office smash hit film trilogy, The Hangover.
More About BGS: The Bluegrass Situation is the world’s largest community for American roots music, culture, and lifestyle. What began as a blog for like-minded Los Angelenos pining for bluegrass in Southern California has morphed and grown over the greater part of a decade to become a national and international standard-bearer for all of the things we love about bluegrass within every branch and offshoot of the roots music family tree—from vibey pop-folk to ravishing alt-country; plus blues, singer/songwriter, Americana, old-time, and everything else above, below, and in between. The Bluegrass Situation proudly represents a unique gathering place that supports the rich and varied history of these musics, while looking ahead for ways to transform traditions into a carefully curated, 21st-century lifestyle.
More About the Americana Music Association: The Americana Music Association is a professional not-for-profit trade organization whose mission is to advocate for the authentic voice of American roots music around the world. The Association produces events throughout the year; including AMERICANAFEST and the critically acclaimed Americana Honors & Awards program.