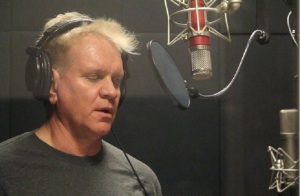 Los Angeles, CA. November 28, 2016 — As the contentious election of 2016 wore on and tensions increased, Los Angeles-based singer-songwriter Johnny Schaefer decided it was time to immerse himself in the joys of creating by combining two of his greatest loves: music and Christmas. The result is a musical journey that begins in the season of advent and proceeds through Christmas Eve, Christmas Day, and on to Epiphany, which completes the 12 Days of Christmas.

In From Here to Nativity, Schaefer carefully blends seven traditional songs and seven original tunes into a seamless experience that explores many of the moods and themes of the holiday season. There are contemplative ballads, folksy tunes, jazz, pop, and even a 50s rock-and-roll song about a kid who thinks he got stiffed by Santa Claus. “It was the happiest project of my life” Schaefer said, joyfully.

Schaefer’s lifetime of singing in churches (his first solo in church was when he was four years old and he has been a cantor at Blessed Sacrament Church in Hollywood, CA since 1981,) is evident in his selection of songs that predominantly focus on the spiritual aspect of the season, hence the name From Here to Nativity.

“I really wanted the album to be fresh,” Schaefer added.. For example, Schaefer didn’t plan on singing O, Holy Night because it has been done so beautifully so many times by others. But after much encouragement. Schaefer teamed with Grammy-nominated harpist Carol Robbins to produce a jazzy waltz version of this classic.

Original songs on the album include Joseph’s Prayer. “There were many songs about Mary, but not much about Joseph, so I put myself in his shoes,” Schaefer said.  He worked with Stephan Oberhoff, who currently is co-producing with Grammy award-winner Quincy Jones and has been music director for Melissa Manchester and Brenda Russell for many years.. During the recording, Oberhoff said he “looked forward to taking the song to where the creator wants it to be.”

On the opposite end of the spectrum, Schaefer wanted a confection on the album that hinted at the novelty songs that become so popular at the holidays. He wrote a 50s-style doo-wop song called Oh Golly, Lookie and enlisted three singer/actress friends to form a backup trio similar to the famous chorus in Little Shop of Horrors.

For one of the two Epiphany songs on the album, Schaefer drew on a tradition in his Hispanic neighborhood of Mt. Washington to create the Carlos Santana-influenced The Baby in the Cake. The song tells the story of the Rosca de Reyes, or Kings Cake consumed on Epiphany (January 6). A plastic baby Jesus is baked into a large round fruitcake symbolizing a crown and the fruit pieces are the gems. The person who gets the baby “wins” and is to throw a party on February 2 with lots of tamales.

Schaefer also began writing with others for the first time, including film composer Lynn Kowal on Shepherd’s Light, a lyrical song that is destined to become a classic. Other songs on this album include a mash up of The Friendly Beasts, and Away in a Manger, also O Come, O Come, Emmanuel, which features Schaefer’s niece, Ellie Schaefer, a college freshman with a gorgeous alto voice.

From Here to Nativity is available on www.hearjohnny.com. Or search for the album title followed by Spotify, Amazon, iTunes, Google Play, YouTube.

Johnny Schaefer has a BA in Music Voice and Composition from California State University, Fullerton. He has been a cantor and soloist at Blessed Sacrament Church in Hollywood, CA since 1981. He has sung backup for Josh Groban, Melissa Manchester, Diahann Carroll, and Sarah Vaughan. He has performed with author and lecturer Marianne Williamson and is an Orange County Musical Arts Society Award Winner, as well as a winner in a Melissa Manchester cover contest.