Interview and photography by Jimmy Steinfeldt

Jimmy Steinfeldt: When did you start with Leica? 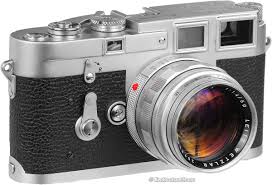 Ebi Kuehne: In 1965. In Germany they have apprenticeships and that’s how I started. My dad had been with Leica. He worked on equipment and brought it home and I liked it. He said if I liked it I should do the three year apprenticeship. It started with learning the different materials. That was three months and then you go into production groups to see how the products are made. At that time we still had measuring instruments, microscopes, etc. A month or two in each department. The last year I went into administration (invoicing, accounting, etc.)

I always wanted to go to the States. That was my dream. When I finished my apprenticeship I asked if there was a possibility to go to the States. They said no but there is something open in Canada. So I moved to Canada and stayed there for seven years. I started by selling microscopes in the eastern provinces and then there was an opening in Winnipeg. That was a hard lesson to learn because it was so cold and isolated but still it was fun. The people there were so helpful and they stick together. This attitude made it possible for everyone to overcome the weather.  I sold microscopes and cameras.

Then I was transferred to Montreal. That was at a time when everything changed from English speaking to French speaking. The English institutions didn’t get funding and everything went to French speaking institutions. So there were no funds to purchase our products. I called Leica in Germany and said I’ll have to find another job. They said there was another opening in Toronto in the photo department. I stayed in Toronto till 1977 and then moved back to Germany where I ran the Leica Akademie.

I wanted to travel and I asked Leica for some opportunity. They said how about export manager? I said yes and began to handle the U.S. and all of Asia including Australia. I enjoyed that a lot. I finally got the offer to come to the U.S. I was here for a year then back to Germany in the export department for about fifteen years. This included going to Asia about once a month. I really liked dealing with the Asians. It was a close friendship. I enjoyed it but with the jet lag it was tough.

Also during this time I met my wife. She came to Germany from the U.S. for Leica training. We had known each other from the Leica dealers in the U.S. Over time we became closer and next year we will have been married for thirty years. At first we were in charge of the Los Angeles area. Leica then changed their structure. They have Leica galleries and stores. We take care of all the galleries and stores, including the non-Leica owned stores and dealers on the west coast.

Leica is truly special for many reasons. It feels like a big family. There’s the company, the dealers, and the photographers. Everyone feels close and connected because we don’t sell huge numbers of cameras like Canon or Nikon. I’ve been with Leica so long because I really like the product. I never have to make up any story about our products in order to sell them because I know it’s the best. Also I always had good bosses. They always supported me. It’s important to have support from management. 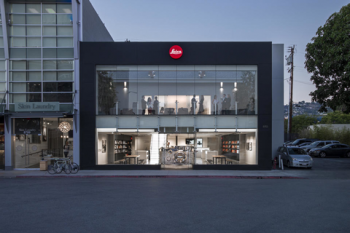 Link to the fabulous Leica store in W. Hollywood where we did the interview and Ebi often works and where I spend a lot of time too. https://us.leica-camera.com/Stores-Dealers/Leica-Stores-Worldwide/Leica-Store-Los-Angeles

Jimmy Steinfeldt: Tell me about the opening of the Leica store we are in today here on Beverly Blvd in W. Hollywood, CA.

Ebi Kuehne: The first Leica store was in Washington D.C. We opened this (the second store) about five years ago. It took us quite a while to find this location. The Leica marketing guy came to L.A. and he and I traveled around looking for a good location. The marketing guy had consulted with a real estate agent. One of the locations we looked at was on Rodeo Dr. in Beverly Hills but the rents were very very high. Around the end of the day we drove by this location and the marketing guy said this would be a great location. Unfortunately it was not available. But a few weeks later it became available. It had been a restaurant but Leica’s design team came in and changed it completely. It was fun to see the new employees come in and I trained them.

Mr. Kaufmann the owner of Leica wanted to counteract the iPhone. He decided we needed to have a gallery where we could show that great photographs are forever unlike an iPhone where after a while you delete photos.

I’m now the link between the staff of the Leica stores and boutiques to Leica management in New Jersey. Also it’s great after all these years to be so close to the people at the factory in Germany. If I need to get something important done I have the contacts.

Jimmy Steinfeldt: What was your first Leica camera?

Ebi Kuehne: It was a screw mount IIIF that my dad had.

Jimmy Steinfeldt: What Leica do you use today?

Ebi Kuehne: I’m not a professional photographer. I learn a lot by going out with groups of photographers. I like the M camera and I love the new Q2. Fortunately I have all the Leica cameras as my samples. It’s fun to handle them and send them to the customers. Next year we are going to do one of our trips. We will bring people to Germany. First to the factory, then stay at the Leitz hotel, then pick up the cameras, and then do a Porsche trip. Porsche brings cars to the factory and then we do a four to five day driving tour through the Swiss and Austrian alps.

Ebi Kuehne: Tibor was something very special in the photo industry. He was very sharp and knew the product to the last detail. I once asked him how he always knew what he had in stock even after he took his two days off. He said when he got back to work he would scan all his stock so he would know exactly what he had. He never wanted to tell a customer about an item, then have the customer say I’ll take it and then find out he was out of stock. He would see previous customers from years ago and remember their name and what they bought. He was Mr. Leica in my mind and with his passing I think an era ended at Samy’s Camera.

He had a special way with customers and not everyone  understood his openness. Once a customer came to the store and said they wanted to buy a Leica M camera. Tibor asked “What do you know about the camera?” They replied “Oh, it’s the best.” Tibor said “Is that all you know about it? I’m not going to sell it to you.” They said “I have a black American Express card.” Tibor said “Money doesn’t impress me, people impress me. You have to have more information before I will sell it to you.” They went to other sales people in the store and asked to buy the camera and they said if Tibor says no then it’s no. Two weeks later the customer came back and said “I’m back and I studied about the camera and I know all about it.” Tibor said “Thank you and now I’ll sell it to you.” Tibor didn’t sell just to make a sale he was standing behind Leica.