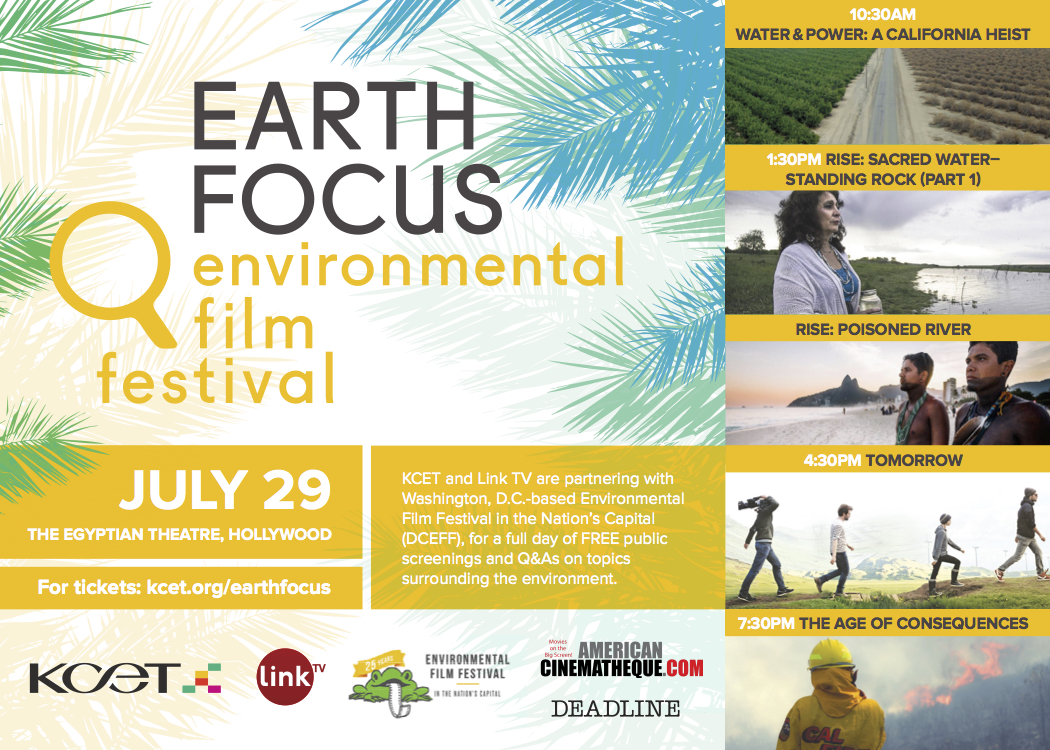 Los Angeles, California (The Hollywood Times) 7/20/17 – “KCET is creating the first earth focused environmental film festival in Los Angeles, which is hard to believe there wasn’t one already in Los Angeles.”  “This is a part of KCET’s commitment to the environment and I know they are doing a large series of programming across all sorts of different outlets via the web and television programming.”  Celebrity Activists Raphael Sbarge told The Hollywood Times today.  More of the interview can been read below, don’t miss it (about 8 paragraphs down).

Link TV nationwide, will launch the EARTH FOCUS ENVIRONMENTAL FILM FESTIVAL in Los Angeles on July 27 with a private opening night reception and screening of the upcoming much-buzzed about Al Gore documentary  An Inconvenient Sequel: Truth to Power from Paramount Pictures and Participant Media.  The screening will be introduced by environmental activist / actress Kristin Davis (Sex and the City) at Paramount’s Sherry Lansing Theatre. A post-screening Q&A will follow with filmmakers Bonni Cohen and Jon Shenk moderated by KCET MUST SEE MOVIES host and Deadline chief film critic Pete Hammond.

Partnering closely on the event is the Washington, D.C.-based (http://dceff.org) Environmental Film Festival in the Nation’s Capital (DCEFF), which for over 25 years has been the world’s premier showcase of environmentally themed films. The Earth Focus Environmental Film Festival is also in partnership with (http://www.americancinematheque.com) American Cinematheque and sponsors that include (http://www.greenwish.com) Green Wish, a grassroots nonprofit that helps other local nonprofit green organizations fund projects for their communities, and (http://www.deadline.com) Deadline.com, the media sponsor for the festival.

KCETLink’s EARTH FOCUS ENVIRONMENTAL FILM FESTIVAL kicks off on July 27 with an opening night advance screening of  An Inconvenient Sequel: Truth to Power,  directed by Bonni Cohen (Audrie & Daisy, The Rape of Europa) and Jon Shenk (Star Wars: Episode I – The Phantom Menace, Audrie & Daisy). A decade after An Inconvenient Truth brought climate change into the heart of popular culture, comes the riveting and rousing follow-up that shows just how close we are to a real energy revolution. Vice President Al Gore continues his tireless fight traveling around the world training an army of climate champions and influencing international climate policy. Cameras follow him behind the scenes — in moments private and public, funny and poignant — as he pursues the inspirational idea that while the stakes have never been higher, the perils of climate change can be overcome with human ingenuity and passion. Cohen and Shenk will discuss the film at a post-screening panel moderated by film expert Hammond.

An active philanthropist, actress Kristin Davis has had the honor of dedicating her time and efforts to serving as a Patron to the David Sheldrick Wildlife Trust since 2009 and is also a Goodwill Ambassador for UNHCR, the UN Refugee Agency. Pairing her passions for philanthropy and film, and with the goal of sharing what she has been lucky enough to witness first-hand, Davis executive produced the 2015 documentary Gardeners of Eden which shows the operations of the David Sheldrick Wildlife Trust from the front lines of the elephant poaching crisis. Davis screened the film for the US State Department and on Capitol Hill to give lawmakers a greater understanding of the need to ban ivory within the United States to prevent elephant extinction. The film was nominated for an EMA Award for Documentary Film and was a finalist for the prestigious Peabody Award. Gardeners of Eden is currently available on iTunes. Davis is best known in her professional career for her award-winning role as Charlotte on Sex and the City.

Five pair of tickets will be given away to the opening night screening event  An Inconvenient Sequel: Truth to Power  via (https://www.facebook.com/kcet28) facebook.com/kcet28. Go to http://www.kcet.org/earthfocus for details.

Raphael Sbarge went on to say that he is so excited to be part of the screening of Al Gore’s documentary “An Inconvenient Sequel: Truth to Power.” He is an actor, an environmentalist and a filmmaker, which he has been involved with KCET and films that he has made that they have acquired and he is currently working on a six part series for them, which are all environmentally based.

“What ‘Inconvenient Truth’ did when it came out 20 years ago, was sort of our cold shower “wake up” call of horrifying images and things that set the stage for a conversation about climate change.  We have not heard much of that idea and at this point, here we are, without talking about our political situation, (laughter), it certainly seems warmer to me, both New York and Los Angeles.  I travel a lot and everyone talks about the seems to be weather changes.”  What I’m excited about this movie, in what I am hearing, this is really his follow up that shows how close we are to a real energy revolution.  I believe we need to wake people up and let them know how urgent this is.  Some people feel, despite what all the scientist say, that it is a Chinese hoax, or whatever, but the rest of the world, other than a few in the United States now that is real and it is important to spread the word.”

“What is also important is to encourage progress.  That is to not get people too frightened, perhaps or so overwhelmed with the bad news, that they just go to apathy and just say “to heck with it, why do anything, because we’re all going to burn up in fiery ball!”  It appears that Al Gore’s movie is going to put focus  on the climate champions, who are really certainly making a difference, sort of in this case the ‘Good News’ about what’s going on out there. I’m really excited about that.”  Raphael Sbarge said.

Make your plans today and keep cool in a beautiful theatre in Hollywood, by coming out this Saturday for this FREE film festival to learn more about our environment and all the organizations that help make it a better place to live in and to show support to KCET.

Take a selfie with it and make sure to tag #MotevLA and #KCETgreen. More information on The Egyptian Theatre and American Cinematheque can be found at (http://www.americancinematheque.com)

The schedule (subject to change) is as follows:

Sacred Water examines the Standing Rock Sioux Reservation’s resistance to the Dakota Access Pipeline, which became worldwide news as the largest gathering of indigenous people in more than a century who came together to protect the area’s water. While Poisoned River follows Brazil’s Krenak People who are struggling to survive in the wake of a massive toxic spill that has contaminated their drinking water, hunting grounds and culture.

Not just a film, but the beginning of a movement seeking to encourage local communities around the world to change the way they live for the sake of our planet.

This documentary film investigates the impact of climate change on increased resource scarcity, migration and conflict through the lens of national security and global stability. Interviews with distinguished admirals, generals and military veterans reveal how climate change stressors water and food shortages, drought, extreme weather and sea level rise  function as catalysts for conflict in volatile parts of the world.

Each of the films included in the film festival will be augmented by original content published on KCET and Link TV’s web sites at (http://www.kcet.org/earthfocus). Additionally, visitors to the websites will be given the opportunity to participate in Los Angeles Mayor Eric Garcetti’s Sustainable City pLAn which was announced on April 8th, 2015. The pLAn sets forth a path to transform Los Angeles by creating a cleaner environment and stronger economy, while ensuring equity for all Angelenos, and outlines actions within various categories ranging from local water and carbon and climate leadership to preparedness and resiliency and environmental justice. To reach the targets in the pLAn, the Mayor is calling upon organizations, universities, neighborhood councils, community groups, businesses, and individual Angelenos to commit to  (http://plan.lamayor.org/get-involved/adopt-the-plan/ ]Adopt the pLAn  into action. Since the release of the pLAn over 60 organizations, companies and individuals have made commitments to  Adopt the pLAn  into action.’

The EARTH FOCUS ENVIRONMENTAL FILM FESTIVAL is part of KCET’s  Summer of the Environment,  which offers a robust library of content on multiple platforms intended to ignite compassion and action for helping to save and heal the planet.  Join the conversation on social media using #EarthFocus, #KCETgreen and #DCEFF.

KCETLink Media Group is a national independent, nonprofit, digital and broadcast network that provides high-quality, culturally diverse programming designed to engage the public in innovative, entertaining and transformative ways. With a commitment to >independent perspectives, smart global entertainment, local communities, and opportunities for engagement and social action, KCETLink depicts people and the world through a lens unavailable elsewhere in U.S. media. A viewer-supported 501(c)(3) organization, KCETLink content is distributed nationally via satellite on Link TV – DIRECTV channel 375 and DISH Network channel 9410 – and on KCET in Southern and Central California via broadcast and cable, as well as through various digital delivery systems. For additional information about KCET and Link TV productions, web-exclusive content, programming schedules and community events, please visit kcet.org or linktv.org. Select programming from KCET and Link TV is also available for streaming on Hulu, Apple TV and Roku platforms.

ABOUT THE ENVIRONMENTAL FILM FESTIVAL IN THE NATION’S CAPITAL

The Environmental Film Festival in the Nation’s Capital (DCEFF) is the world’s premier showcase of environmentally themed films. Since 1993 our mission has been to celebrate Earth and inspire understanding and stewardship of the environment through the power of film.

Each March in Washington DC, we present 100+ films to audiences of more than 30,000. Filmmaker and topical discussions are an important part of our events, which happen at museums, embassies, libraries, universities and local theaters throughout the city. We also present a year-round screening series and community events.

Many of our screenings are free, and our Washington, DC location offers the unique opportunity for films and filmmakers to reach national and international lawmakers and decision-makers. Our impact continues to grow both in DC and beyond.

DCEFF is the largest green film festival in the world; the longest-running in the United States.  To learn more, visit (http://dceff.org/)