The Hollywood Times was honored to have covered the past two Earth Focus Environmental Film Festival and we can truly say that it is so worth the money and your time to watch all the films being offered.  Because, the past two film festivals screened life-changing films indeed! This years Earth Focus Environmental Film Festival will not be an in-person event, but don’t miss the opportunity to be part of the Virtual one this year.

Check out our article from 2017: https://thehollywoodtimes.today/its-a-wrap-kcet-inaugural-earth-focus-environmental-film-festival/

Check out our article from 2018: https://thehollywoodtimes.today/kcet-earth-focus-environmental-film-festival-its-a-wrap/

The West Coast premiere of “Playing With Sharks,” acquired by National Geographic Documentary Films at the 2021 Sundance Film Festival, will kick off the lineup as the Opening Night film on Monday, April 12 at 7 p.m. A post-screening panel discussion with writer/director Sally Aitken (The Week The Women Went, The Pacific: In the Wake of Captain Cook), creator/producer Bettina Dalton (Big Red: The Kangaroo King, Borneo’s Secret Kingdom) and the subject of the film, Australian pioneering marine conservationist, cinematographer and renowned shark expert Valerie Taylor will be moderated by KCET CINEMA SERIES host and Deadline chief film critic Pete Hammond.

General admission tickets for the EARTH FOCUS ENVIRONMENTAL FILM FESTIVAL are available starting today. Ticket options include a $45 all-access pass to attend all nine of the virtual film screenings and post screening discussions taking place on the Eventive platform (the three-part, Earth Day April 22nd PBS special GRETA THUNBERG: A YEAR TO CHANGE THE WORLD is available on-air on PBS SoCal locally as well as streaming live online at pbs.org and on the free PBS App). Alternatively, $10 individual screenings can be purchased on any of the three websites at pbssocal.org/efeff, kcet.org/efeff and linktv.org/efeff.

Notable guests and films featured in this year’s slate of environmental-themed documentaries include Patagonia Films’ “Public Trust: The Fight for America’s Public Lands” on Thurs., April 15, from executive producers Yvon Chouinard and actor-turned-environmental activist Robert Redford, which investigates impending threats on America’s public lands. The film will also air locally as part of EARTH FOCUS PRESENTS on Wed., April 21 at 9 p.m. on Link TV and Sun., April 25 at 5 p.m. on KCET. Director David Garrett Byars and Producer Jeremy Rubingh will join the virtual panel discussion. The Closing Night film on Fri., April 23 is the California Premiere of the 90-minute 2020 Swedish film “Citizen Nobel” that follows Chemistry Nobel Prize recipient Jacques Dubochet and how he, as a ‘noble citizen,’ should fulfill his responsibility as a researcher and as a human being. A panel will follow with both Dubochet and director Stéphane Goël.

The EARTH FOCUS ENVIRONMENTAL FILM FESTIVAL encourages better understanding of and dialogue on environmental issues, and motivates audiences to create positive change in their own community. The festival extends public media’s mission of strengthening communities through education. The virtual event engages members, viewers of all ages, influencers and media while raising funds to support public media’s future environmental programming.

Original content related to Earth Month programming on related topics ranging from environmental justice to climate activism will be available on the PBS SoCal, KCET and Link TV websites. Contributors will include veteran environmental journalists and other experts. Additionally, website visitors will be treated to multimedia features as well as trailers to the films in the EARTH FOCUS ENVIRONMENTAL FILM FESTIVAL.

Festival schedule is as follows (*subject to change):

The extraordinary life story of pioneering scuba diver Valerie Taylor, a fearless marine maverick whose passion for sharks knows no bounds – even when there should be. Taylor has dedicated her life to exposing the myth surrounding the fear of sharks. Featuring Q&A Guests: Writer/Director Sally Aitken Creator/Producer Bettina Dalton and the subject of the film, Australian pioneering marine conservationist, cinematographer and renowned shark expert Valerie Taylor. Moderated by KCET CINEMA SERIES Host and  Deadline chief film critic Pete Hammond.

An intimate portrait of the growing movement amongst Native Americans to reclaim their spiritual, political and cultural identities through food sovereignty, while battling the trauma of centuries of genocide. Featuring Q&A Guests: Director Sanjay Rawal, Producer Tanya Mellier and Founder of the Native American Culinary Association Nephi Craig. Moderated by DeLanna Studi (Artistic Director, Native Voices at the Autry, Autry Museum of the American West). 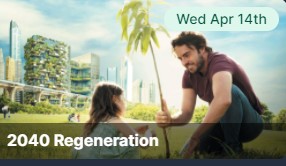 Embark on a journey to explore what the future could look like by the year 2040 if we simply embraced the best solutions already available to us to improve our planet and shifted them rapidly into the mainstream. Structured as a visual letter to his 4-year-old daughter, the film blends traditional documentary with dramatized sequences and high-end visual effects to create a vision board of how solutions could regenerate the world for future generations. Featuring Q&A Guests: Award-winning Director Damon Gameau (That Sugar Film). Moderated by TBA 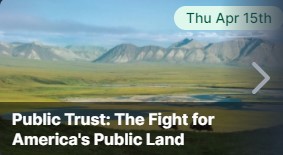 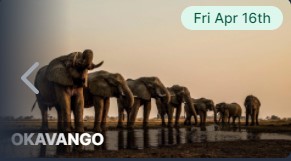 F. Murray Abraham (Amadeus, The Grand Budapest Hotel, Homeland) narrates the wild experience of the Okavango Delta, an unlikely oasis and lush paradise in Southern Africa that connects and supports a wide array of creatures. In episode one of this three-part series that premiered as episodes of NOVA, viewers explore the landscape and wildlife of the Upper Okavango River. A lioness severely injured by a buffalo is left for dead by her pride. Now handicapped, she has to survive in the swamp alone, hunting to feed her cubs. Featuring Q&A Guests: Directors Dereck and Beverly Joubert (Eternal Enemies, Eye of the Leopard, Last Lions, Reflections on Elephants). Moderated by TBA.

EARTH FOCUS: The New West and the Politics of the Environment – Mon., April 19 at 7 p.m. 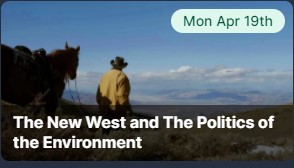 Iconic Nevada Senator Harry Reid set the foundations for a green new deal in the state using power in new ways to settle water wars with respect for Native Americans, protect endangered species and usher in a just transition to renewable energy. Reid forged allegiances between unlikely allies and crafted policy to grow the economy of his home state while protecting its wilderness and in the process, redefined the future of the West. The conversation immediately following the screening is courtesy of the Environmental Film Festival in the Nation’s Capital (DCEFF). Featuring Q&A Guests: U.S. Senator Harry Reid, Author Adam Jentleson (Kill Switch: The Rise of the Modern Senate and the Crippling of American Democracy) and Senior Field Director of the Conservation Lands Foundation Jocelyn Torres. Moderated by Executive Producer Jon Christensen. 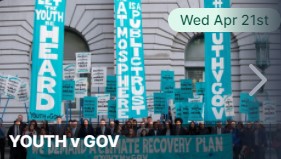 Since 2015, twenty-one plaintiffs, now ages 13 to 24, have been suing the U.S. government for violating their constitutional rights to life, liberty, personal safety and property through their willful actions in creating the climate crisis they will inherit. Featuring Q&A Guests: Filmmaker & Scientist Christi Cooper, Co-Lead Counsel Phil Gregory, Alaskan Federal Plaintiff Nathan Baring. Moderated by the Director of Programming for the Environmental Film Festival in the Nation’s Capital (DCEFF) Brad Forder. 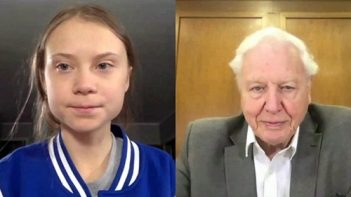 Travel with Greta Thunberg as she takes her fight to a global stage in this three-part, on-air event. In Part One she sees impacts of climate change at three locations: melting glaciers and dying trees in Canada, and fire devastation in California. And when a UN conference moves to Madrid, she sails across the ocean during life-threatening storms. Part Two follows Greta’s journey from the World Economic Forum in Davos, Switzerland, to Poland, where she speaks with miners who have lost their jobs. She also visits the UK, where she meets with one of her inspirations — Sir David Attenborough. Part Three takes Greta to Switzerland and Denmark to investigate potential solutions to limit climate change and looks for lessons from the world’s response to COVID-19.

When Jacques Dubochet receives the 2017 Nobel Prize for Chemistry, his life changes. Out of the shadows and into the light, he is suddenly contacted from all sides. What can he do with his voice, which is now heard by everyone? How should he, as a ‘noble citizen’, fulfill his responsibility as a researcher and human being? A speech by Greta Thunberg turns everything upside down. Featuring Q&A Guests: Director Stéphane Goël and Nobel Prize Winner and subject of the film Jacques Dubochet. Moderated by KCET MUST SEE MOVIES host and Deadline chief film critic Pete Hammond.

PBS SoCal and KCET are both part of the donor-supported community institution, the Public Media Group of Southern California. PBS SoCal is the flagship PBS station for diverse people across California and delivers content and experiences that inspire, inform and educate. PBS SoCal offers the full slate of beloved PBS programs including MASTERPIECE, NOVA, PBS NewsHour, FRONTLINE, and a broad library of documentary films with works from Ken Burns; as well as educational content including PBS KIDS programs like DANIEL TIGER’S NEIGHBORHOOD and CURIOUS GEORGE.

KCET is on-air, online and in the community, and plays a vital role in the cultural enrichment of Southern California. KCET offers a wide range of award-winning local programming as well as the finest public television programs from around the world. Throughout its history, KCET has won hundreds of major awards for its local and regional news and public affairs programming, its national drama and documentary productions and its website, kcet.org. For additional information about both KCET and PBS SoCal productions, web-exclusive content, programming schedules and community events, please visit kcet.org and pbssocal.org KCET Originals and PBS programming are available to stream on the FREE PBS App on iOS and Android devices, Roku, Amazon Fire TV, Apple TV, Android TV, Samsung Smart TV, and Chromecast. KCET is also available to watch live on YouTube TV.

Founded in 1999, Link TV is an independent viewer-supported media organization dedicated to providing programs that engage and inform its audiences with unique perspectives, and empower them to become involved in the world.  Reaching more than 21 million U.S. satellite households nationally (DIRECTV channel 375 and DISH Network channel 9410), Link TV connects American viewers with people at the heart of breaking events, organizations at the forefront of social change and the vibrant cultures of an increasingly global community. Select programming from Link TV is also available for streaming on Apple TV, YouTube and Roku platforms. For additional information about Link TV productions, web-exclusive content and program schedules, please visit linktv.org.