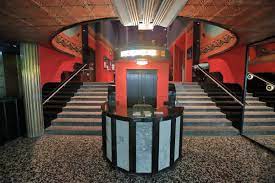 We are still moving forward but will be opening in early 2022. You will be amazed and feel like you are back in the 1930’s glorious glamour days. We also believe that the opening of the Earl Carroll will be a major Entertainment Complex leading the way to bring Hollywood back to be Glamourdaze!  The glamorous 1930s supper club will reopen as an entertainment venue

The long-anticipated restoration of the 1930s-era Earl Carroll Theatre on Sunset Boulevard is picking up steam, and is set to reopen as a 38,000-square-foot entertainment venue.

One of the former owners of the nearby music venue The Fonda Theater, announced today that he and his business partner have signed a 10-year lease with options to renew to “take over and revitalize” the landmarked Streamline Moderne theater in Hollywood.

The theater is expected to host an array of events, including stage shows, concerts, movie premieres, and special events. The theater will also be available for community meetings.

“We’re thrilled to be revitalizing the theatre, returning it to its original Streamline Moderne design, and bringing all kinds of wonderful entertainment experiences to locals and visitors alike,” said Thaddeus Hunter Smith, one of a trio of owners who revamped the Fonda in the mid-2000s. Smith is partnering with real estate investor Brian Levian on the Earl Carroll.

The supper club and theater was designed in 1938 by architect Gordon B. Kaufmann, architect of the Greystone Mansion and the Santa Anita Racetrack. Named for theater producer and director Earl Carroll, the theater’s facade featured a 20-foot-tall neon sign depicting the face of Carroll’s girlfriend Beryl Wallace over the entrance. Inside, the venue held a 60-foot rotating stage, oodles of neon, Art Deco details, and lavish stage shows.

As part of the revamp, the signature sign will be recreated and returned to its spot over the entrance. Many original elements of the theater that still remain—including 6,200 feet of blue and gold neon tubing and 30-foot-tall light columns on either side of the stage—will also be restored as part of the new venue.

“We believe it will spur the revitalization of the entire area which, ultimately, is our dream,” Smith said.

Some of the restoration work has already started, a spokesperson for Smith and Levian said. The redone theater is expected to open in late 2020.

The Earl Carroll’s restoration was forecast as part of a 200-apartment mixed-use development next door called Essex Hollywood.

The developer, Essex Property Trust, owns the theater and was the applicant who nominated it for historic-cultural landmark status. Plans for the Essex had always called for revitalizing the theater, though the uses have shifted.

Originally, Essex planned to have the theater be used as office space or studio uses, though preservationists had wanted the space to be reactivated as a venue or something closer to its original uses. (The theater was last used as offices for Nickelodeon Studios.)

The complex will also feature a new paseo running between the Essex and the Earl Carroll, allowing for pedestrians to move between Sunset Boulevard and Leland Avenue.