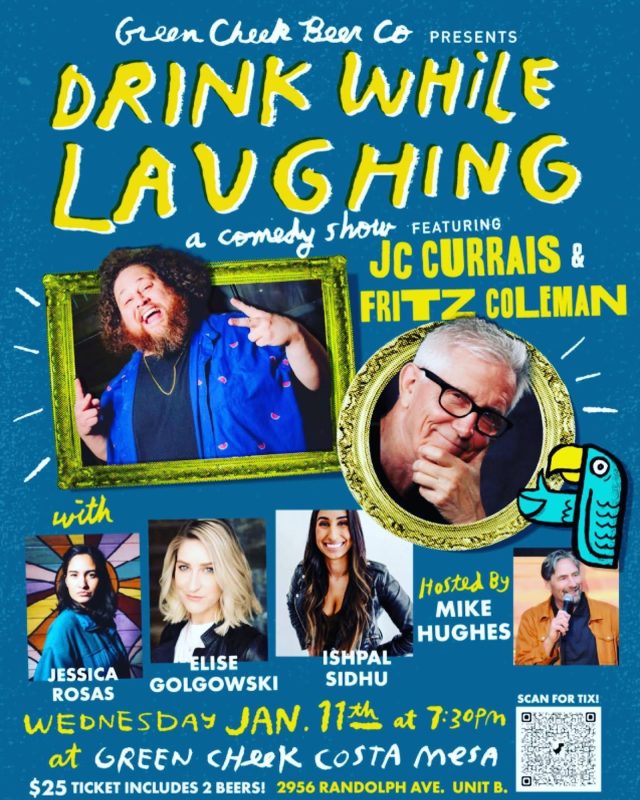 Costa Mesa, CA (The Hollywood Times) 1/21/23 – There is a thriving comedy scene 7 nights a week in Orange County. Comic/Show Booker Mike Hughes organizes a great comedy show every other month in the brewery room at Green Cheek Beer Brewery on Randolph Avenue in Costa Mesa just south of the 405 freeway a mile from South Coast Plaza. The enclosed room of 30 round tables has a multi glass window view of the main bar and merchandise area. It is located in the hipster area adjacent to The Camp and the Anti Lab off Bristol.

A recent cold night had a sold-out audience outfitted in their winter gear, which is usually a rarity, but this has been a cold winter in the southland. Pre-sale tickets were $25 which included 2 beers. I had the delicious Irish by Marriage red ale which is appropriate for me as I have checked that box. Promoter/comic Ohio native @MikeHughes34 had the audience in stitches between the 5 comics sets. Also, Mike handed out various Brewery merchandise items throughout the night.
Opening the show is Florida Funny Girl Elise Golgowski  who has a podcast called “Sunshine State Stories” with Chris Cope. Elise recounts with funny audible sounds her past encounters on the dating scene. Some listeners might get uptight with her “wedgie” tales, yet it is all in good fun, yet you might leave with a new perspective of “sweaty palms”. 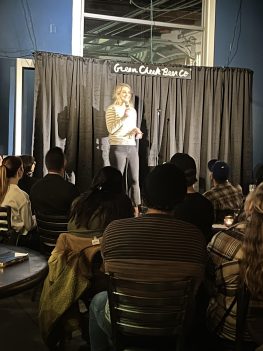 Next up is comic Ms. Jesse Rosas who shares quips about her mixed heritage and her Panda Express experience. True to her message onstage, @HeyJessicaRosas aka Jesse does pass out her cute “Friends” style business card which is a great promo idea. The third female on these five comic lineups is Ishpal Sidhu who shares about being the favorite Aunt in lieu of motherhood. As a recent Norte Dame law school grad who doesn’t understand how people think all Indians know each other. It was impressive to see 3 females on the comic lineup as it is not always that way. 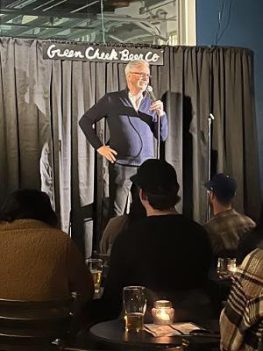 Next up was legendary comic weatherman Fritz Coleman who has been known as the unofficial mayor of Burbank during his decades covering the weather including the 11 pm news at NBC channel 4. Fritz bounces the quick wit like multiple lightning bolts across the sea of laughing comic fans. Considering the audience was all ages yet mainly those in their 20s and 30s, Fritz was very popular with the whole room, and he received several rounds of applause at various points in his set. Probably most of the audience attentively watched his weather reports as kids to know if their soccer game was on or if El Niño weather was causing floods to close school for the day. Fritz shared his personal relationship with Pfizer products and binge-watching shows. 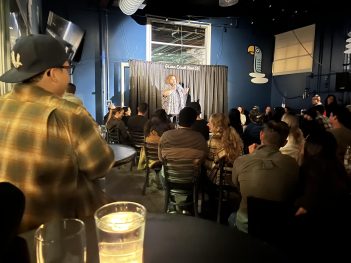 The final comic of the evening was JC Currais in his favorite Hawaiian shirt for the occasion. JC gave insight into his recent gf breakup with his girlfriend and other funny stories. JC works in the Shaggy song ‘It wasn’t Me’ in the set. JC has a part in the recent movie Babylon. After the show JC had merchandise for sale of White Claw thin cozies and Fanny packs. At the end of the night, a truck load of fans blasted the Shaggy tune “It Wasn’t Me” which JC got a kick out of. The next Drink While Laughing show will be in March. Green Cheek Beer Co. Brewery won the “Small Brewery of the Year” award last year.