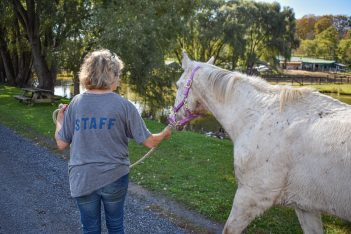 Just as she was about to accept a job as the principal of a new high school after ten years in the classroom, Stevens realized that combining her passion for teaching and learning with her love of animals would be “an even more meaningful way to spend the next 25 years,” she told The Hollywood Times in an exclusive interview. 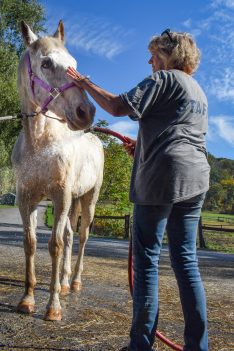 So in 2001, Stevens launched the Catskill Animal Sanctuary in Saugerties, New York–today, it’s one of the leading sanctuaries for farmed animals in the world.

“I still draw on what I learned in the classroom as we educate and hopefully inspire our followers about all the reasons to begin or hasten their journey to plant-based living,” said Stevens, a tireless animal and vegan advocate.

The Sanctuary rescues 9 species of animals: cows, chickens, pigs, sheep, goats, turkeys, ducks, geese, and rabbits, in addition to potbelly pigs and horses. In their 20th year, they’re gratified to have saved more than 5,000 farmed animals through direct rescue, and are currently home to around 250, a number that often balloons to as many as 400, when they’re involved in large emergency rescues. 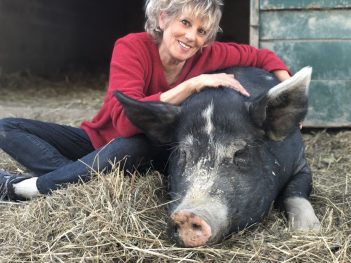 “They’ve changed my life,” Stevens acknowledged. “I know beyond the shadow of a doubt that in the ways that truly matter, we are all the same. Every animal wants the same things I do: Safety. Good food. Comfort. Freedom to make choices about how to spend their time. Friendship.”

As with every non-profit, the pandemic has severely impacted Stevens’ beloved sanctuary. 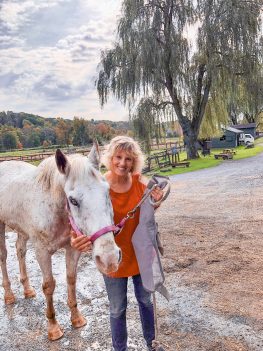 “We’ve had to work around all kinds of challenges—both those we anticipated, like the closure of our bed and breakfast, the cancellation of tours and events—and those we couldn’t foresee…like the loss of a major donor who could no longer support our work because family members lost jobs.”

Nevertheless, Stevens doesn’t let anything hold her back for too long.  “We pivoted on a dime like everyone else did, taking our programming online. Our vet bill alone exceeds $100,000 per year…there’s no such thing as “time off,” she enthused.

This is when the Sanctuary created Animals on Call, a virtual tour in which attendees get a ‘nose-to-screen’ experience with soulful sheep, mischievous goats, deeply affectionate cows and turkeys, and others. “We continue that program today, with content tailored to all ages so that groups of all kinds can book a tour!” 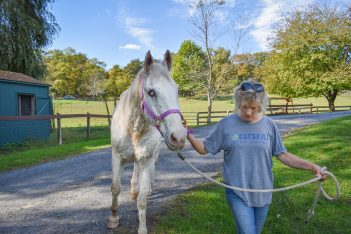 The Sanctuary’s vegan chef (WHO?) began hosting her award-winning cooking classes virtually, featuring recipes from their culinary program’s cookbook: Compassionate Cuisine: 125 Plant-Based Recipes From Our Vegan Kitchen. The book’s uniqueness lies in the fact that stories and photos of Sanctuary residents are interspersed throughout.

In May 2021, Stevens launched a podcast, Herd Around the Barn, that’s already reaching thousands of listeners in 85 countries around the world, and features some of the world’s leading experts in “all fields related to farmed animals, our treatment of them, and its impact on our world.”

Stevens and her team also had to rethink how they brought in the funds to care for hundreds of animals and run multiple educational programs.

“Rather than our normal on-site summer fundraiser or our annual Manhattan gala, Cocktails and CowTales, we hosted The Goat Games, a virtual nationwide event that raised funds for 10 sanctuaries throughout the country,” said Stevens. “The collective effort of 10 farmed animal sanctuaries, 150 athletes and 1,500 supporters raised $217,170.81 for farmed animals across the US—that felt pretty good for a pilot effort!”

She continued: “Did these things combined make up for the sudden loss of 30% of our income? Nope. We’re still climbing out and like so many others, still need help.”

If you’re an animal lover who’d like to help Catskill Animal Sanctuary continue its work on behalf of farmed animals, consider giving the gift of animal sponsorship for the holidays, a birthday, or other special occasion.

“You can sponsor an animal on a loved one’s behalf and provide love and care to an animal in need,” explained Stevens. “Sponsorships help provide nutritious food, warm bedding, and outstanding medical care to one lucky being—the sponsor, in turn, gains a friend for life and some other nice perks.”

The Sanctuary’s staff remain passionately dedicated to the animals most of humanity never considers.

“The animals most of us consider food want their lives as much as we want ours, they feel every emotion we do, and they’re every bit as individual as our dogs, our cats, or our kids,” Stevens stated. “It’s incumbent on all of us to make different choices.”

For folks eager to align their lifestyles with their values,, Stevens had invaluable advice to go vegan.

“Be gentle with yourself. It’s perfectly okay to be an ‘almost-always vegan’ or a ‘vegan except when I visit my parents’ or ‘vegan except on Saturday night’ than to be someone who’s not even trying. In the process of making choices that are kinder to the animals and the planet, don’t beat yourself up when you fall short: have the intention to make kind –vegan–choices, do your absolute best, and be proud of yourself. When you’re ready to go all in, it will be an easy shift!”

Thanks to a few of the sanctuary’s most devoted supporters, an online match is going on through midnight, December 31. All gifts up to $150,000 will be matched!