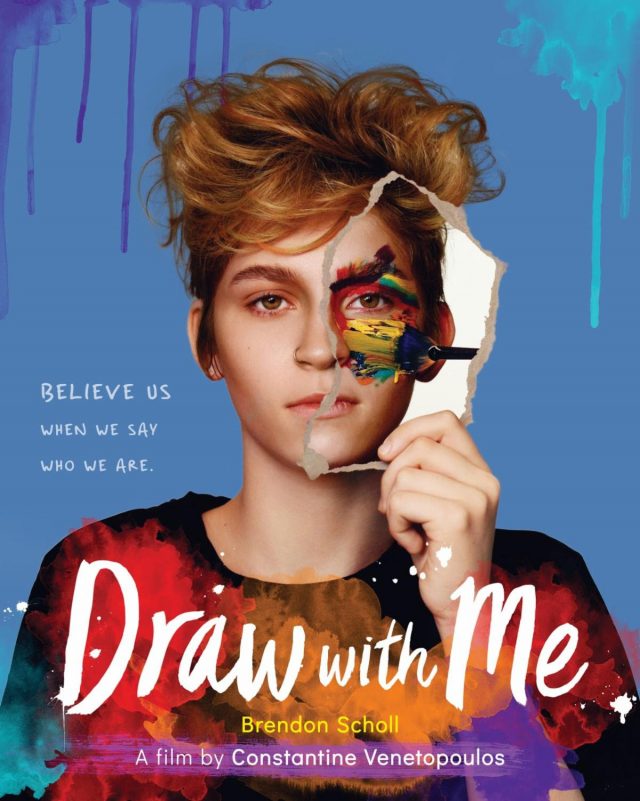 Los Angeles, California (The Hollywood Times) 1/27/2021 –  DRAW WITH ME, about the journey of trans youth – Brendon Scholl – who uses their art as an important outlet while navigating life’s challenges with their family, featuring a special introduction by their aunt Jennifer Lopez. The film runs theatrically now at ArenaScreen through Feb. 9th. The Hollywood Times spoke to Director, Constantine Venetopoulous.

Your new film, “DRAW WITH ME” is very powerful. You said, “Although I knew that telling this story came with a lot of responsibility, I felt ready and the family truly made me feel safe and comfortable in doing so.” Tell us more.

Thank you for your kind words. Coming from the world of fiction film and suddenly having found me in the space of the documentary world for the first time through a serendipitous and organic series of events I will admit I felt somewhat outside of my safe zone. I was now not the creator of a fantasy or an imaginary world, but the voice of truth. And the truth is much richer than fiction, it has a life of its own; you cannot control it, package it, or sugarcoat it. Although I was the one to ignite the film and the project, once I had done that I will admit I felt cold feet. I realized that this was bigger than I had imagined and that it carried a massive amount of weight impact-wise especially when it comes to the LGBTQIA+ community, which need voices such as Brendon’s the most. So, I had a small pause, a moment of doubt. But it was Leslie Ann at that point that pushed me. She may not know it, it was something subtle like “you got this Constantine” that gave me the courage that I lacked at that moment. It had that motherly tone that is confident yet soft at the same time. It was at that moment that I never looked back and I have only moved forward with each growing step of DRAW WITH ME.

What surprised you the most?

What surprised me the most is how much I have learned from this entire experience, and how much I have grown from being a part of telling this story. Not only did I learn so much from a part of the LGBTQIA+ community that I didn’t know that much about (the trans community) but I watched society and the people around me evolve through the film. From my family to friends and people I met in screenings, to Brendon’s family… it truly feels like this film has a way of connecting people. It brings people together. It’s hard to explain, it is almost as if it breaks the barriers between people. Perhaps because it is a sensitive subject and it is something which not so many people have a wide level of education about, so it gives them the courage to ask the questions that they were afraid to ask. They’re like okay now I understand something, let me find out more. The impact the film has had has also surpassed all my expectations. From screenings to panels and beyond it has truly made its way through so many avenues. On January 21st, 2021, the White House adjusted its contact forms to include non-binary pronouns such as THEY/THEM/THEIRS in their listing. I felt as if we have come full circle and whatever role (even as minor a role) the film played in that, it was an important milestone in my life and the film’s life. The support of President Biden of the film through the Revry Visibility Awards continues to shine its light and I cannot wait to see how the LGBTQIA+ community will continue to find a safe home, made safer day-by-day.

The film was created in partnership with The Trevor Project. Why was this an important element?

It was a crucial element in many ways. I have been a volunteer of the Trevor Project for over a decade supporting youth and learning about their struggles and how they overcome them, so as a “teacher” the Trevor Project has been essential in helping me identify what questions to ask and how to be there for Brendon as they so bravely opened up about their most personal moments. Brendon had reached out to the Trevor Project themselves during one of their darkest times, so it immediately became something over which we connected. I am proud that the film has become a support tool for The Trevor Project because the film has a funny way of “being there” for the youth that is not ready to open up about what they are feeling, as they don’t feel ready to face something that they may feel about themselves or do not feel trust with someone around them to share what they are experiencing. So a film about the things they may have questions about is a safe way for them to learn, and feel less alone. I truly love the Trevor Project and always say I wish there was something like the Trevor Project for me when I was in the closet as a youth struggling with my sexual orientation in a small suburb in Greece. It is important to mention that THE TREVOR PROJECT was created about 21 years ago following a short film entitled TREVOR that had won the oscar at the time about a coming of age story of gay youth. Seeing the vast impact that the film had brought to life such an impactful organization, I can only imagine the positive impact this could have as we race for the short documentary OSCAR.

What do you want people to learn from the film?

I think learning can be a tricky thing. So I would say it’s not what specific piece of information I would like them to learn. Of course, there are educational elements such as trans identity matters, preferred pronouns, etc. that one can learn about by watching the film… but what I would like them to feel is open. I would like the audience to learn that it’s okay to not know everything about another person or community but to be open to learning more, to be open to asking the right questions, and more importantly to listen and try to understand the other person. DRAW WITH ME is somewhat of a pioneer in its subject. It was one of the first documentaries to screen at the Trevor project, one of the first films to be used as an educational resource by the New York Department of Education, and it was the first film to be the subject of a panel at the UNITED NATIONS as part of the 50th anniversary of the StoneWall riots. So it is somewhat of a conversation starter. It gets the subject out and then it asks for society to talk about it, and expand the conversation.

It’s hard to pick a favorite scene as they all somewhat serve one another. It’s a puzzle of a story that comes together as one. But if I had to pick a moment, I would say it is the ending of the first part where Brendon talks about being who they are, and if someone does not accept them, then that’s their loss. I find a very grounded confidence in that, that we can all aspire to, not only in terms of our sexuality but in terms of who we are. It can sound like a utopian sentiment at times, but it is something we can strive for.

Is this film a conduit into a bigger conversation?

I would hope so. It is definitely not a conclusion but more of a conversation starter. It has set the stage for a much wider conversation that is already happening. From Jennifer Lopez awarding Brendon with the Revry Visibility Award to President Joe Biden (President-elect at the time) speaking up about LGBTQ+ rights in conjunction with the award show, to the New York Department of Education using the film as an educational resource and the UNITED NATIONS taking lead with the film… the possibilities are endless, and we cannot wait to expand the conversation and push the envelope until acceptance of all-embracing our differences is the reality we live in. I do hope the film does well with the academy as it would truly help provide a continued platform for the film to find its way on the screens of so many youths that could benefit from knowing that they are not alone in what they may be going through.

Our trailer can be found at https://vimeo.com/450714908 our social media @ithakafilms our site is www.ithakafilms.com