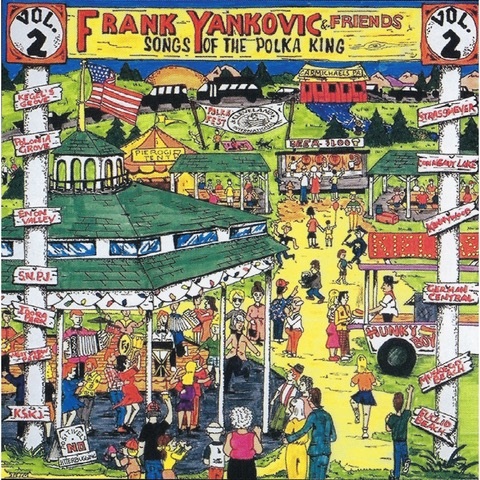 Songs of the Polka King Volumes 1 and 2 from Cleveland International Records features Grammy-nominated collaborations between Frank Yankovic (1915 – 1998) a/k/a “America’s Polka King” and numerous artists recorded in the mid-1990s.  One of those who joined forces with Yankovic was Don Everly who passed away just last week.  An updated and expanded version of the albums, Songs of the Polka King – The Ultimate Collection  has been newly repackaged and digitally remastered is coming November 12 and available on CD and as a 2 LP set.

The original albums were conceived by Cleveland International’s late founder Steve Popovich who had been appointed Senior Vice President of Polygram Nashville in 1986. At the time, the Everly Brothers were under contract there as were the Statler Brothers, Tom T. Hall, Johnny Cash, Kathy Mattea, Kris Kristofferson, Johnny Paycheck and others. Popovich’s relationship with Don Everly was cemented by the fact that “Born Yesterday,” a Don Everly-penned song recorded by the Everly Brothers hit the country charts with Popovich’s support. Later, Popovich had The Everly Brothers join with Johnny Cash and daughter Roseanne Cash for new versions of Johnny Cash’s earlier songs, “Ballad of A Teenage Queen” with “Get Rhythm” on the flip side; this became The Everly Brothers final charting single.

Popovich brought on Joey Miskulin, a native Clevelander and accordionist for Riders In The Sky, to co-produce Yankovic’s albums.  He was a logical choice as many years before, Miskulin had been taken under Yankovic’s wing as a teenage prodigy.   When Miskulin spoke to Don Everly he was put at ease when Everly told him he was not only well familiar with Yankovic but also that Ike Everly, his dad, had an accordionist in his band.  They chose a piece of repertoire that was an echo of Everly history: “That Silver Haired Daddy of Mine.”  Originally a hit for Gene Autry in 1932, The Everly Brothers included it on Songs Our Daddy Taught Us, their 1958 album.

Don Everly arrived at Joey Miskulin’s home studio in Nashville the day after he was approached and recorded the song right then and there.  “Don absolutely nailed it – one take!,” Miskulin recalls of that brief session that took place 27 years ago.

Songs of the Polka King – The Ultimate Collection  with contributions from Cowboy Jack Clement, Drew Carey, Chet Atkins, Gary Chapman, David Allan Coe, Weird Al Yankovic (no relation), Riders In The Sky and others, will be released November 12.  More details about the release are forthcoming shortly.

Launched in 1977 by record mogul and beloved music industry executive Steve Popovich, the label’s first single release was “Say Goodbye To Hollywood” by Ronnie Spector and The E Street Band. Shortly thereafter, Popovich signed an unknown singer named Meat Loaf whose Bat Out Of Hell album would go on to become one of the top selling records in history. The label’s catalog has sold in excess of 50 million albums worldwide, one of the first independent labels to achieve that milestone.  Following the passing of its founder, Cleveland International was relaunched in 2019 with Steve Popovich Jr. at the helm, putting out new music as well as curated catalog items that bridge the generational divide. Cleveland International releases are distributed globally by BFD/Orchard.