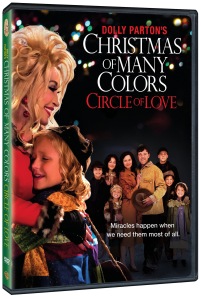 NBC is set to re-air their blockbuster special: “Dolly Parton’s Christmas of Many Colors: Circle of Love” starring Jennifer Nettles, Ricky Schroder, and Gerald McCraney. The 2-hour special will air again on Friday, December 23 at 9 p.m. ET/PT. The DVD of the movie, which also features a guest appearance by Dolly Parton, is available today at retailers nationwide.

“Dolly Parton’s Christmas of Many Colors: Circle of Love” tells the story of when the Partons, a family of humble means living in the mountains of Tennessee, face a devastating event that challenges their will. But when they experience a bewildering Christmas miracle, the Partons are drawn closer together than ever — with deepened faith and love for one another.

Don’t forget to gather the family around the TV tomorrow night to watch this wonderful, heartfelt movie about true love, family and faith.  This movie is truly one movie you do not want to miss and order a copy of it for your family and your friends.

Or you can use this link that takes you directly to the proper place at each retailer:

Dolly Parton is the most honored female country performer of all time. Achieving 25 RIAA certified gold, platinum and multi-platinum awards, she has had 25 songs reach #1 on the Billboard Country charts, a record for a female artist. She has 41 career top 10 country albums, a record for any artist, and she has 110 career-charted singles over the past 40 years. All-inclusive sales of singles, albums, hits collections, paid digital downloads and compilation usage during her Hall of Fame career have reportedly topped a staggering 100 million records.

In 1999 Parton was inducted as a member of the Country Music Hall of Fame. She has her own star on the Hollywood Walk of Fame and became a member of the National Academy of Popular Music Songwriters Hall of Fame in 2001. Broadcast Music honored Parton with their Icon Award in 2003, and in 2004 the U.S. Library of Congress presented her with their Living Legend Award for her contribution to the cultural heritage of the United States. This was followed in 2005 with the National Medal of Arts, the highest honor given by the U.S. government for excellence in the arts.