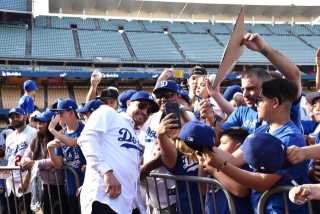 Los Angeles, CA, (The Hollywood Times) 1/28/2019–“ One of my favorite things about being a Dodger and being here in LA is there is no offseason. You drive around town and you see Dodger jerseys and Kershaw jerseys… and it doesn’t matter whether it’s August or November, December you guys represent for us all year long and we love that. That’s why you guys are the best fans.” Justin Turner, Dodgers’ player

The Los Angeles Dodgers hosted FanFest this weekend at Dodger Stadium presented by Coca-Cola and San Manuel Casino. With baseball’s regular season two months away, Dodgers’ fans were able to get up close and personal with former, current and new players. The offseason celebration brought out thousands of “True Blue” fans.

Fans had the opportunity to take selfies in front of selfie banners, player cutouts and the new Dodger slogan, LA Bleeds Blue. Multiple fans were able to get a selfie with several players as they hurried from one station to another.

The Dodgers used FanFest as the official platform to announce AJ Pollock’s signing. The 31-year-old played centerfield for the Arizona Diamondbacks and when the 2018 season ended, he became a free agent. Pollock said it has been his goal to play in Los Angeles as a Dodger. Fans greeted Pollock as he took the main stage at FanFest with chants of, “ AJ. AJ. AJ. AJ.” which caused him to smile.

Pollock answered the question, “What’s it going to be like playing centerfield in front of a full house every night here at Dodger Stadium?”

“I’m excited. Hopefully not getting heckled as much (chuckles). You guys really wore me out over the years.”

“It’s all in good fun… I’m looking forward to coming here. These guys have been to the World Series for the past two years and they have a great winning culture here. I’m just excited to be apart of it and hopefully a lot of wins in the future.”

“I’ve played against them for the last seven years and I saw a transition, these guys went from trying to win to, these guys EXPECT to win. …There aren’t a lot of teams out there like that. These guys obviously expect to be in the World Series and to win the World Series. I can’t really have a better situation for me personally and my family. We are just super excited to be here.”

Pollock signed a four-year deal with the Dodgers and will face his former teammates during the Dodgers’ home opener on March 28 at 1:10 p.m at Dodger Stadium.

Five year Dodger player Justin Turner attended the event sporting a new haircut and a trimmed beard. He was well welcomed by fans as he shared his thoughts on last season, the upcoming season, the Dodgers giving back, and his and his wife’s passion to serve others.

“We get out there and get into hospitals, get over to schools and visit veterans and try to help them get off the street. Whatever we can do to give back to you guys (the fans). You guys come out to support us all year long. You guys are the best fans in baseball. It’s the least that we can do to get out and give back to all of you guys. It’s nice seeing you out in the community and letting you know we are real people just like you are. That’s the whole goal.”

Fans received updates on closer Kenley Jansen and shortstop Cory Seager’s health. Seager who tore a ligament in his elbow shortly after the 2018 season began and had to undergo Tommy John’s surgery also had hip surgery as he was going through recovery.

Seager is expected to be ready to go on Opening Day of the Boys in Blue 2019 season.

Jansen, who had corrective heart surgery in November of 2018, is doing well and is pumped about the start of the season and his part in it. He spoke about the team’s run for the World Series Championship.

Diehard Dodgers’ fans talked with us about their FanFest experience, posed for photos, got autographs and took selfies with current and new players.

We asked Jamie and Michelle, true blue lovers of the boys in blue, especially Austin Barnes a few questions about their time at FanFest. This was their fourth year attending the event.

THT: You said this is your fourth year attending FanFest. What was the first year like compared to this year?

Jamie, “Oh, yeah. A lot more. After the World Series, it got really packed. Before, it was pretty empty and we had the freedom to roam around and do “whatever” we wanted but now we have to be in a designated spot (if you want to get a photo or an autograph) because it’s a lot more packed. But it’s still worth coming.”

THT: Would you recommend that other fans come to FanFest?

Jamie, “Honestly, I would recommend that they come, the bigger the fan base the better, obviously. Of course, for personal, selfish reasons the emptier the better so we get more opportunities (to connect with the players).” Both ladies laugh.

Ask most people to stop for a picture at an event and they are always happy to pose for a photo and these Dodgers’ fans were no different.

Dodgers’ blue fans called out to Chris Taylor for an autograph as he was walking towards the VIP autograph area and he was more than happy to stop for a while and sign a few items.

Fans had the opportunity to purchase the VIP experience they wanted or to choose an All Access Pass to experience a day of unlimited activities.

Activities to choose from included: