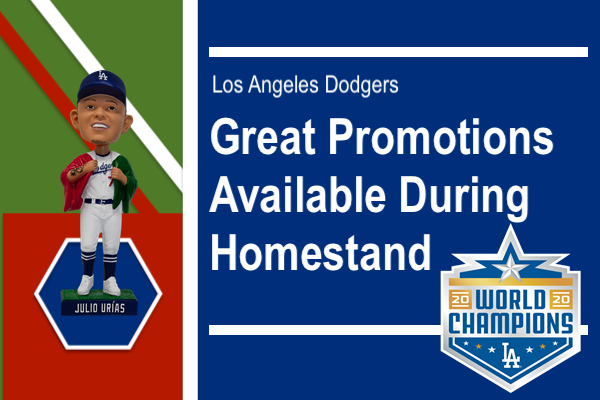 Los Angeles, CA (The Hollywood Times) 9/28/2021–With five games remaining in the regular season, the Los Angeles Dodgers, who have already earned a postseason place and trail the San Francisco Giants currently by 1.5 games in the NL West, have returned home for their last homestand of the season.

The Dodgers will celebrate Korean Heritage Night on Wednesday and Da de Los Dodgers on Friday, both events will include themed pregame rituals and a unique giveaway for those who purchase the special event ticket pack at Dodgers.com/events. On Sunday, a large number of Pups at the Park presented by Lucy Pets will be welcomed to Dodger Stadium (for more information, see Dodgers.com/Pups).

The Dodgers will wear their Los Dodgers Nike City Connect uniforms on Tuesday and Friday, as part of their Hispanic Heritage Month celebration presented by UCLA Health, and will host La Gran Fiesta Viva Los Dodgers presented by Spectrum, Coca-Cola, and Budweiser prior to Saturday’s game.

At the 76® Station in Lot 6, La Gran Fiesta begins at 3 p.m. and continues until game time, with player stage appearances, music, and live entertainment.

Tickets remain available at Dodgers.com/tickets for the Dodgers’ final regular-season games of the season against the San Diego Padres (Wednesday -Thursday) and Milwaukee Brewers (Friday-Sunday).

The Health Protocol is Still in Force
All individuals ages two and older, regardless of vaccination status, are required to wear a mask or an appropriate face covering at all times at Dodger Stadium, except when actively eating or drinking in their ticketed seat or when seated at a table, according to a Los Angeles County Department of Public Health (LACDPH) order (effective Aug. 19, 2021).

Following is a complete schedule as well as additional information about the end of the regular-season homestand.

• Pups at the Park presented by Lucy Pets. Ticket information can be found at Dodgers.com/Pups.