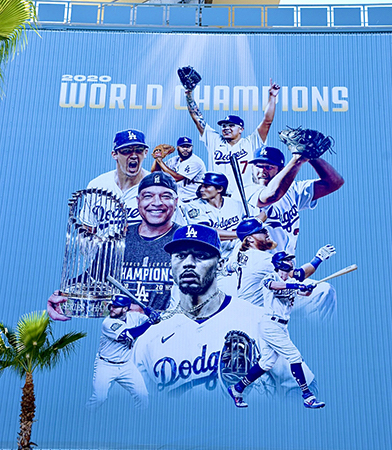 Los Angeles, CA, (The Hollywood Times) 4/7/2021–“Welcome to Dodger Stadium which is not just the most beautiful place ever built, to play or to watch the game of baseball, it’s also a world-famous COVID testing center, voting center, and vaccination center and an occasional outdoor concert venue. And as you will see later a full-time open-air baseball history museum. That’s what we have here at Dodger Stadium and we couldn’t be prouder of all of that.” Stan Kasten, Dodgers President, and CEO

The 2021 season is off to a great start for the 2020 World Series Champions, The Los Angeles Dodgers. They’ve won 5 of their 7 games since opening day against the Colorado Rockies on April 1, 2021. Fans are eager to get back into the swing of things and attend games in person.

The Dodgers’ first home game is this Friday, April 9 at 1:10 p.m. With that in mind and the improving COVID conditions, the Dodger organization invited the media to get a first-hand look at the recently remolded Dodger Stadium. If you recall, Dodger Stadium was set to do a big reveal last year when all heck broke loose – A WORLDWIDE PANDEMIC HIT! Not only was life brought to a screeching halt but so was the highly anticipated Stadium renovation presentation.

Now that health and life are returning to normal, all signs point to a very special day at the Park, as the hometown boys in blue will not only be able to play in front of their fans, but they will also be able to lift the 2020 World Series Championship Banner and collect their well-deserved Championship rings. All this will be done in front of LIVE – in-person loyal Dodger fans.

With over 15,000 fans expected at the Stadium on Friday, there will be some restrictions.
Everyone in the Dodgers organization is looking forward to seeing each of the fans.
Fans will not be able to see many of the updates right away, but they will be able to see them shortly.

Stan Kasten, the Dodgers’ President and CEO, and Janet Marie Smith, the Dodgers’ Executive Vice President of Planning and Development, welcomed the media.
They expressed their delight at the prospect of fans returning to Dodger Stadium and being able to enjoy all the stadium has to offer, despite the fact that access to certain areas will be restricted for the time being.

“I’ve been waiting for this day not just for one year but for two years. Since we showed you all that video when we made that announcement of what we were going to do here. We have delivered everything we were hoping to deliver and we couldn’t be prouder.
You will get to see most everything here today. Fans won’t be able to see that, just yet. The fans that will be coming here on Friday will be able to walk through there (the centerfield gate) and get to their seats. But most of these areas will be closed off to fans. We are hoping sometime between May 1 and June 15, according to the Governor (Newson), we should be open 100%. That’s the day we are all looking for and you will see why we are so excited for that day to happen. You will see it all today, said Kasten.”

Janet Marie Smith, Dodger Executive Vice President, Planning and Development led our tour of the Stadium and said, “These plazas (at Dodger Stadium) are knitted together by stairs, bridges, escalators, and elevators. So for the first time in sixty years, fans can surf and navigate Dodger Stadium and really take in all of its beautiful views and wonderful offerings. The 2020 World Series Trophy will be displayed in the Gold Glove Bar here in the left-field pavilion.”

There is so much to see and experience at the newly renovated Dodger Stadium that it will have to be experienced in person to take it all in but we will do our best to share with you the highlights of the Stadium.

Memorabilia is displayed throughout the Dodger Stadium and will change year to year. This year the LaSorda family has loaned the Dodgers’ organization many items which are on display located in the 1962 lockers in the right-field pavilion.

All will seem normal when sitting in the bowl at the game, but one major exception that spectators will find is the home run seats.
Drink rails and padded bar stools are included in the modern seats, which are situated just outside the outfield wall.
Additionally, using bridges, elevators, and escalators, it is now easier to stretch your legs and take a stroll around the entire Stadium. Truly a 360-degree experience.
“All-access” has been granted.

A large portion of the stadium is covered in historical and artistic exhibits. Bring your camera with you.

There are three distinct kids’ areas in the Centerfield plaza area to give families with young ones a safe place to release some of their energy. And there are multiple viewing monitors all around the Stadium to ensure fans don’t miss any of the action taking place on the field during the game.

Fans can also go to the batting cages in the Centerfield plaza and take a few swings or throw some strikeout pitches if they want to get some ball practice in.

Awesome! A state-of-the-art screen is located near the Centerfield plaza and fans will be able to sit in front of it and take a virtual picture with Dodgers players.

LED boards can be found in the ballpark, as well as prominently displayed in the Gold Glove Bar.
It’s yet another perfect spot to enjoy a game day at the stadium.
It has the feel of a sports bar and is decorated with golden gloves worn by specific Dodgers, as well as an 82-foot LED display that will broadcast all of the league’s games happening on that day, making the experience much more authentic.

Jackie Robinson statue at the Centerfield entrance with plans to erect a Sandy Koufax statue in the plaza opening as well.

Fans will have plenty to choose from when they’re ready to eat, with over 50 new points for sale for food and beverages – not to mention the food trucks, the Dodgers retro fire truck, and vintage ice cream truck.

There will definitely be a need to use the restroom with all of the food and beverages available. Just saying. Dodgers have doubled the restrooms in Centerfield and around the park. Remember to social distance.

As the tour came to an end, it was great to get a firsthand look at what Blue Fans can expect when they return to Dodger Stadium.

Here are a few more images from the tour.

Baseball and the Dodgers are always worth celebrating.