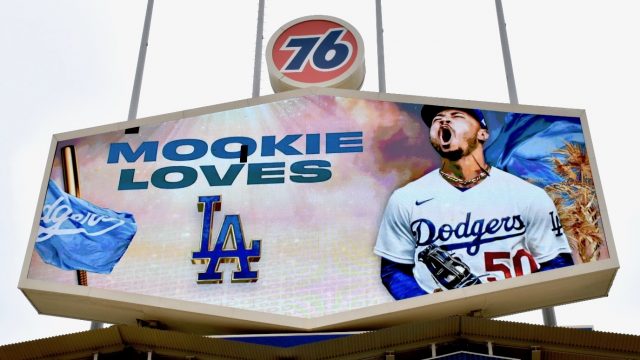 Los Angeles, CA, (The Hollywood Times) 5/10/2020–“It’s crazy. When I used to play 2K, baseball had 2K a long time ago, I was probably 10, 12, 13 somewhere in there and I would always create a player and he would always be on the Dodgers. I just loved the uniforms. And so, growing up I would always have my creative player on the Dodgers. I never really dreamed about playing for the Dodgers but I guess that was my sub-conscience dreaming about it because I always put myself on the Dodgers. If I didn’t, I would trade myself to get to the Dodgers and so I think maybe it was a sub-conscience thing that I always wanted to play for them. I’ve always had Dodgers around without me thinking about it. So now, it’s here to stay.” Mookie Betts, Dodgers outfielder on if he ever thought of being a Dodger when he was starting out.

Mookie Betts, the Dodgers’ talented outfielder, and a group of young people from around Los Angeles came together virtually today, May 11th, at 11:00 a.m. for a special Dodgers Love LA Community Tour event.

The Los Angeles Dodgers are no strangers to displaying community support.
The organization is always looking for new ways to communicate and interact with Angelenos.
This year’s Dodgers Love LA Community Tour, sponsored by Bank of America, will continue throughout the month of May.

Spreading Dodger Blue love today were Naomi Rodriguez, the Dodgers’ Vice President of External Affairs and Community Relations, and Mookie Betts, the Dodgers’ outfielder, as they hosted another leg of the tour at Dodger Stadium, welcoming young participants from all over the city to meet and greet Betts.

Rodriguez began the meet and greet by giving a shout-out to the local schools in attendance and asked them to raise their hand or display an emoji when their school name was called out.

“Welcome, welcome, welcome. Welcome to the Dodgers Love LA Community Tour. Today we are going to get to know our star player, our special guest, Mookie Betts. I know you are all excited to hear from him. And to kick it off we have a video.”

Betts was seated in centerfield, facing the DodgerVision boards, and during the 45-minute session, he happily answered questions from the young participants and shared a bit about himself in an attempt to bring the Dodgers organization, himself, and the Los Angeles group of young Dodger fans closer together.
As a show of support for the Dodgers, the majority of young zoom guests and participants wore Dodger Blue gear.

“Thank you guys for joining,” Betts said at the end of the video introduction.
I know it’s a little early for everyone, so thank you for coming on, and I can’t wait to meet you guys one day.
I know the COVID stuff is messing everything up, but hopefully, hopefully, here soon I get to meet everyone and shake everyone’s hand. Thank you.”

Maximo Chavez from Roosevelt High School (in the ninth grade): “My question to you is, when you are in a position where you’re under pressure, what do you do or what do you think about to like overcome it and be able to feel empowered and not be under pressure as much?”

Betts: “That’s a great question. For me, I just really try and breathe. I know it seems really simple but just collecting your thoughts, breathing, taking some nice long deep breaths defiantly calms me down. And then I just think about my family. I know my family’s going to be there for me no matter how successful (I am) or if I fail or whatever goes on, my family is always going to be there and is always going to love me. I just try and think about my family and that usually calms me down and I’m able to play under pressure.”

Betts: ”That’s another great question. I think multiple things motivate me, but I’d say that the most is to one day have a Hall of Fame speech. You can’t take games off. You can’t take years off. You know, it’s gotta be consistent throughout your whole career. I know it’s kind of a selfish thing, but I think doing that makes me play to the best of my ability each and every day, and obviously, to help the team win. So I think in doing those types of things, maybe one day I’ll be able to have the hall of fame speech.”

Student from Monrovia (no name given): “Since you are new to Los Angeles, what are some of the best discoveries you’ve made? Favorite places to visit or eat?”

Betts: “Since I’ve been here in LA, I have not gotten to do anything because of COVID. I haven’t really been out to eat really at all because everything’s been closed. We went to Nobu once, but I know there are a whole lot of new restaurants that are really nice. I haven’t really gotten to say what my favorite is just yet.”

Host Rodriquez: “Are you In and Out… well, you don’t eat meat though, right?”
Betts: “ Yeah, that’s the thing, when I went to Nobu, I was, but I made the switch over to vegan so now I have to try and find some vegan restaurants.”
Host Rodriquez: “The In and Out fries are really good!”
Betts: Laughing, ”Yeah, they are really good, but I’m not going to go just for fries.”

Jaime C.: “Hello. How do you stay strong and believe in your swing when you are slumping, both mentally and physically?”
Betts: “That’s a really good question. I can’t say you always do. Many times you kind of doubt yourself and I think that’s when things kind of get worse. So, it really just goes back to just putting in the work and just finding a way to compete against the pitcher instead of competing against yourself. I know that’s kind of weird to say, but when you focus on you not feeling good or you slumping, then you forget the competition of the game. It’s just important to refocus and focus on just beating the pitcher instead of worrying about your mechanics or worrying about you not getting hits your last however many at-bats.”

The meet and greet was a great success and the young participants asked really good and thought-provoking questions. All are eager to get back to the stadium and see the Dodgers play in person, especially Mookie Betts. 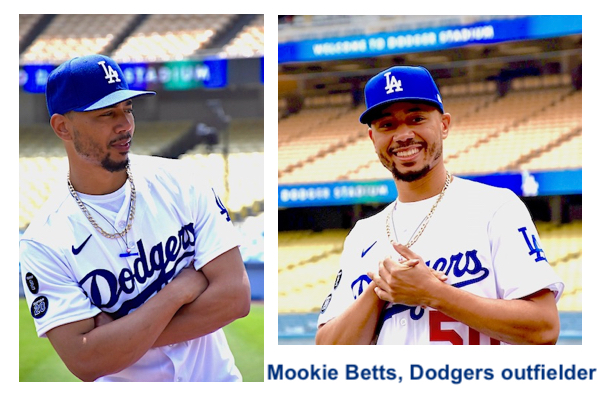