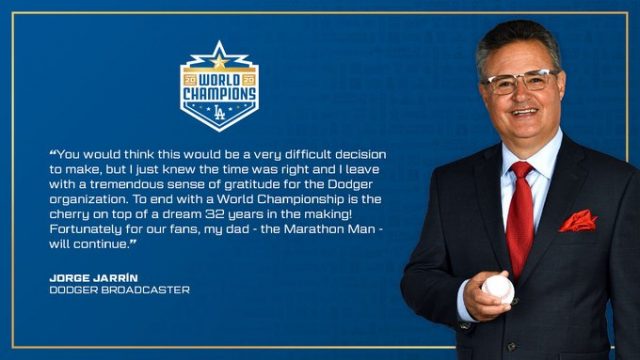 This post brings two recent stories from the Dodgers organization

Los Angeles, CA, (The Hollywood Times) 2/5/2021–“ You would think this would be a very difficult decision to make, but I just knew the time was right and I leave with a tremendous sense of gratitude for the Dodger organization. To end with a World Championship is the cherry on top of a dream 32 years in the making! Fortunately for our fans, my dad – the Marathon Man – will continue. ” Jorge Jarrín, Dodger broadcaster.

Throughout his 35-year broadcasting career, which started in 1985 as “Captain Jorge” covering traffic from Jet Copter 790 on KABC Radio, Jorge Jarrín has received various awards. In 2001, he broke into baseball on DIRECTV’s “Major League Baseball Game of the Week,” which was broadcast to all of Latin America.
Jorge Jarrín, Dodger broadcaster and son of Hall of Famer Jaime Jarrín, annouced his retirement Thursday, January 4th. He called games in Spanish on both radio and television for nine seasons and serviced the Dodger organization for 17 years.

“We congratulate Jorge on 35 award-winning years in broadcasting and thank him for his 17 years of service to the Dodger organization,” said Erik Braverman, Dodger Senior Vice President of Marketing, Communications and Broadcasting.

Los Angeles, CA, (The Hollywood Times) 2/5/2021–“The Los Angeles Dodgers are making birthday wishes come true yet again for families experiencing homelessness. They are World Champions not only for being a phenomenal baseball team, but for their love and servitude to our community,” said Mary Davis, Executive Director, Worthy of Love.

In collaboration with Worthy of Love, a non-profit organization that offers memorable birthday parties for children experiencing homelessness, the Los Angeles Dodgers held their third annual birthday party at the Union Rescue Mission in Downtown Los Angeles and Hope Gardens in Sylmar at the end of January 2021 for young people. Tony Gonsolin and Josiah Gray, Dodger pitchers, joined in the virtual fun and games and sang Happy Birthday to the kids.
Virtual visits from kid-favorite TV mascots, a dance off, art projects, a kid-friendly blue science experiment, and 400 meals delivered by Dodger partner California Pizza Kitchen were all part of the one-hour celebration.

“Every kid deserves to have a special birthday celebration and seeing the unbridled joy on the faces of these kids makes this party a highlight each year,” said Naomi Rodriguez, Dodger Vice President of External Affairs and Community Relations. “The work of Worthy of Love is so important because every kid and every birthday is worth celebrating, especially during these challenging times, and we thank our partner California Pizza Kitchen for helping to make this such a memorable and festive occasion.”