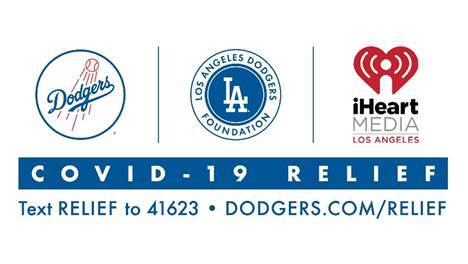 The following is a press release from the Los Angeles Dodgers:

The Los Angeles Dodgers, Dodgers Foundation, and iHeartMedia Los Angeles announced today that they will be providing critical donations to support local COVID-19 relief efforts that will aim to uplift significantly impacted Angelenos, including our most vulnerable populations and those on the front lines of this crisis. Relief efforts will address those experiencing homelessness, food insecurity, difficulty with basic needs and provide support for health care workers.

Relief efforts will bring together in-kind and monetary donations from the Dodgers, Dodgers Foundation, team partners, players, and fans, and direct the support to the organizations that need it most, providing more than 100,000 meals and $100,000 of in-kind donations. Dodgers Radio AM 570 LA Sports along with all iHeartMedia Los Angeles radio stations will utilize their platforms to raise awareness for the campaign with promotion throughout the month including on-air updates, interviews and digital support.

Fans can text “Relief” to 41623 or visit Dodgers.com/Relief to donate. A special online auction will also launch on April 8th and will feature autographed Dodgers memorabilia, jerseys from the 2020 roster, and game-used Max Muncy and Kiké Hernández jerseys from games in which the players homered.