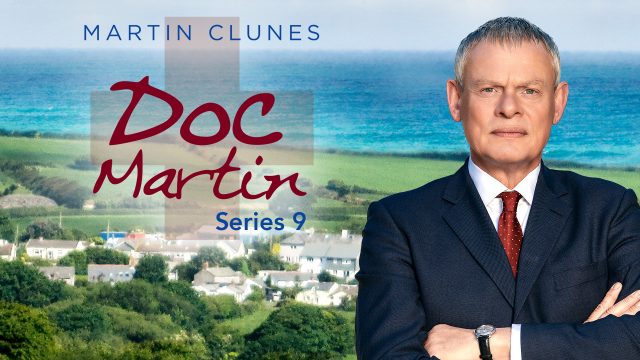 One of the most popular British series in the U.S. and worldwide makes U.S. Premiere the day after its UK debut

Since its premiere on UK’s ITV in September 2004, DOC MARTIN has enjoyed a highly-rated run in its home country and has become one of the most successful British series worldwide — especially in the U.S. with new fans discovering the series on Acorn TV, public television and on Acorn’s DVD and Blu-ray sets. Called an “eccentric comedy full of lovable oddball characters” (Los Angeles Times) and “absolutely bloody hilarious” (London Evening Standard), the series marks its 15th anniversary with its first new episodes in two years — starting Thursday, September 26, each of the eight new episodes of DOC MARTIN Series 9 will premiere weekly exclusively in the U.S., Canada and Mexico on Acorn TV – only a day after they air in the UK for the very first time.

BAFTA winner Martin Clunes (Arthur & George, Men Behaving Badly) returns to DOC MARTIN in his rollicking lead performance as Dr. Martin Ellingham, a tactless, self-centered, and uptight doctor – with a phobia of blood — in the quirky yet charming fictional seaside town of Portwenn in picturesque Cornwall. Clunes had recently enjoyed an acclaimed turn as a London detective in the three-part highly-rated ITV crime drama series Manhunt.

In Series 9, Doc Martin’s career is hanging in the balance as the General Medical Council follows up on complaints about his brusque approach to patients. Meanwhile, his wife, Louisa (Caroline Catz, Murder in Suburbia) pursues a new career as a child counselor and is concerned that their son, James Henry (Elliott Blake), is becoming too much like his dad. Returning favorites of series 8 include Dame Eileen Atkins (The Crown, Upstairs, Downstairs, Cranford) as the Doc’s formidable Aunt Ruth, Ian McNeice (Doctor Who, Rome) as Bert Large, and Joe Absolom (Hatfields & McCoys) as his son Al.

The Hollywood Times had the opportunity to interview Ian McNeice (aka Bert Large) back in January. Check it out here:

I have to say I had not seen the show, but after talking with Ian, I couldn’t wait to watch it.  Watch it I did, like those binges everyone talks about.  I watched series one through 6 on Amazon Prime, the I had to purchase series 7 and 8 through Acorn TV, which was worth the $4.99 for the streaming service.

I watched Series 9 episodes 1 and 2. Once again hooked and can not wait to see episode 3. What an amazing show and you should definitely start watching this amazing British show.  You will want Doc Martin as your doctor!  “I know everyone thinks you’re a t—-r, Doc, but I’ll be sorry to see you go,” said one grateful patient on being rescued from a cattle crush. When our flawed hero insisted that he wasn’t going anywhere, another local said he’d heard the rumours too. Thus was the foundation laid for the ninth series.

It’s the ninth season, spread over 15 years. New viewers keep finding the show via Acorn or DVD or reruns on individual PBS stations (including WKAR); and all of this has sort of happened by accident.

“I’m far too keen to please,”  Clunes said. “I wish I had his ability to explain to people that he is always right and they are wrong.”

Now a new season begins across two continents: Each Wednesday, an episode debuts in England; the next day, it reaches North America via Acorn, a modest streaming service – it recently passed the million-subscriber mark – that imports shows with British-type charm.